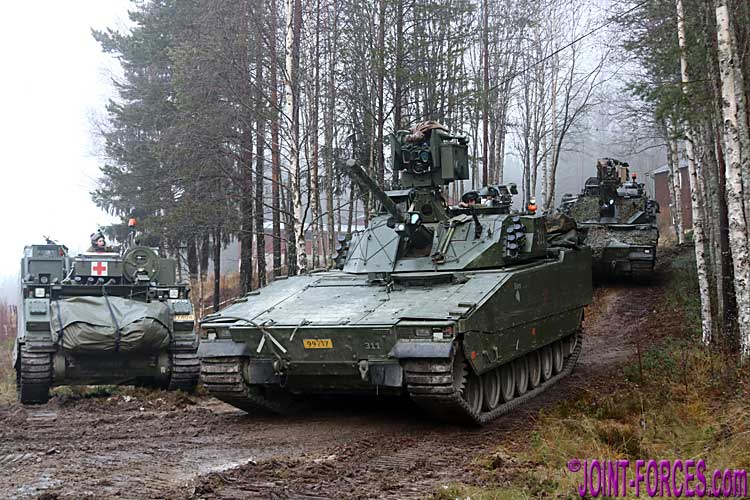 We now focus on the Norwegian Panser Bataljonen participants of North (Red) Force on the centre axis during TRIDENT JUNCTURE 2018, writes Bob Morrison.

In addition to TRJE18 being a massive multinational training exercise for the NATO Alliance, held in Central Norway at the invitation of the Norwegian Government, these wide-ranging manoeuvres were also used to validate the Scandinavian nation’s Brigade Nord. Headquartered at Bardufoss, well inside the Arctic Circle, and Norway’s primary Land Forces manoeuvre formation, this brigade consists of two almost fully professional mechanised infantry battalion battle groups, one light infantry battalion comprised mostly of conscripts and reservists, an artillery battalion and an engineer battalion plus supporting assets including intelligence, signals and logistics battalions.

For TRIDENT JUNCTURE 2018 the brigade’s Setermoen-based Panser Bataljonen, literally translation is Armoured Battalion but they are actually a Mechanised Infantry battle group with a mix of tanks and tracked infantry fighting vehicles, played enemy to the British-led multinational South (Blue) Force brigade defending the the North-South axis along the centre-most of three parallel valleys; running from Telneset and Tynset in the north through Tylldalen on the Tysla River to Storsjøen Lake in the south. The Panser Bataljonen, which takes the Black Mink as its mascot, consists of: one cavalry squadron, with CV90 recce vehicles; one armoured squadron, with Leopard 2A4NO main battle tanks; two strike squadrons, with CV90 infantry fighting vehicles; a combat support squadron, including logistics, signals and medical assets, etc.; and, when deployed operationally or in this case on a major exercise, a combat battalion group consisting of artillery, engineer and intelligence etc. assets drawn from brigade.

The accompanying photos are of the Panser Bataljonen battle group armoured vehicles on D+3, as they prepared to make what would turn out to be the final push of their advance, the Battle For Bergset, and next day (F-Day) as they awaited the counter-attack by South (Blue) Forces. The bulk of the Norwegian armoured vehicles we encountered were Leopard 2A4NO tanks and standard CV9030N Infantry Fighting Vehicles, but we also spotted some of the new MultiC and STING variants of the CV90 (see separate album). As the battlegroup moved south it was supported by a battery of M109A3GN self-propelled howitzers from the Setermoen-based Artilleri Bataljonen and armoured engineer vehicles from the Skjold-based Ingeniør Bataljonen plus a small number of NM196 (M577) tracked and SISU Pasi 6×6 field ambulances.

In the next In Focus article in this series we will look at the constituent parts of the British-led South (Blue) Forces multinational battle group tasked with blocking the Panser Bataljonen at the Elvål river crossing, a few kilometres north of Bergset, and then pushing them back to their start line on the Trøndelag County border.