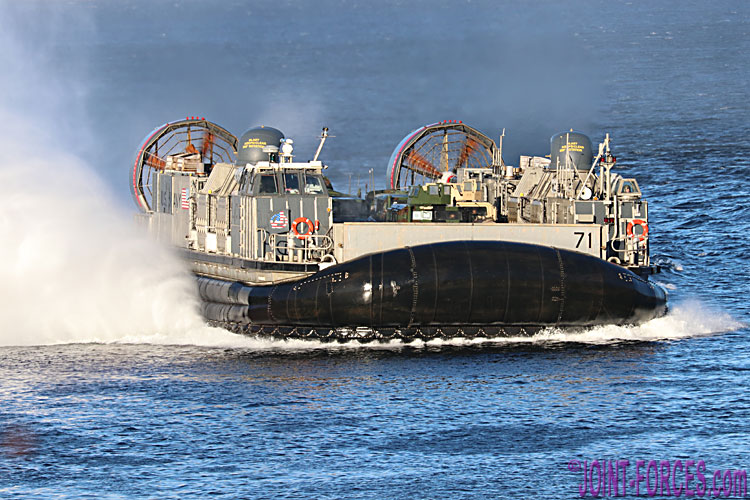 For this latest instalment of our NATO Exercise TRIDENT JUNCTURE 2018 (TRJE18) coverage we are now focussing on the US Marines of 24 MEU, writes Bob Morrison.

In the first half dozen features in this series we concentrated on aspects of the Italian-led multinational South (Blue) Forces brigade defending the westernmost of three north-south axes in Central Norway from advancing aggressive North (Red) Forces. In this article we look at one of two Red Forces contingents bearing down on the Italian, Spanish and Slovenian troops defending the valley towns of Folldal and Oppdal and in the next article we will look at their armour

Out on the ground before hostilities began, the Red Forces on the westerly axis facing the Italian-led brigade consisted primarily of Canadian light infantry using a fleet of commandeered (i.e. Norwegian-provided) Hägglunds Bandvagn 206 (Bv206) all-terrain over-snow vehicles for mobility. However as the defenders over-matched these attackers the Red Force commander bolstered them with an amphibious task force which landed unopposed at Ålvundfjord, some 90 kilometres west of Oppdal. While the lightly equipped Canadians, who we will look at in a future feature, advanced south-west from Berkåk along the forested high ground either side of the main trunk road from Trondheim to Oslo, the amphibious task force drawn from 24 MEU of the US Marine Corps advanced eastwards to try and catch Blue Forces in a pincer movement.

The 24th Marine Expeditionary Unit, abbreviated to 24 MEU, is one of three such units home-based on the US Atlantic seaboard at Camp Lejeune; three more MEUs are home-based on the Pacific seaboard at Camp Pendleton in California and a seventh MEU is permanently deployed to Okinawa in Japan. Each MEU, which usually deploys aboard a Wasp-class LHD (Landing Helicopter Dock) amphibious assault ship, numbers over 2,000 personnel and includes its own aviation element in addition to a reinforced US Marine infantry battalion.

TRIDENT JUNCTURE 18 or TRJE18, with in excess of 50,000 military participants, was billed as being NATO’s biggest multinational exercise since the end of the Cold War and the three primary axes of battle covered so much ground in central Norway, a mountainous region where fast road travel between towns simply is not feasible, that it was simply impossible for even two of us to cover all the action during the two four-day defence and counter-attack phases. However the day before the main dynamic display near Trondheim, which coincided with the start of the combat phase out in the wild country three hours to the south, we were able to get to one of the landing beaches near Ålvund to watch LCACs delivering the first wave of Leathernecks ashore.

Our next encounter with 24 MEU was to be inland at Oppdal airfield where Norwegian Home Guard supported by Spanish armour were defending the runway in the hope of preventing the attackers seizing it for use by fixed wing transport aircraft. Through sheer weight of numbers the attackers, from Battalion Landing Team 2nd Battalion of 2nd Marine Division supported by M1 Abrams main battle tanks (from pre-positioned stocks), won the airfield and the Marines then headed south through Oppdal town towards Hjerkinn.

Early next morning, as we ourselves headed south up through the snowy pass towards Hjerkinn and then east towards Folldal, we encountered half of Echo Battery from 2nd Battalion of 10th Marines setting up their gun line of M777 howitzers just south of Oppdal. As is standard practise, the two half batteries leapfrogged forward with one going firm until the other was emplaced and then it advanced while the other guns covered the move to ensure at least two howitzers were available at all times to support the Marine Infantry.