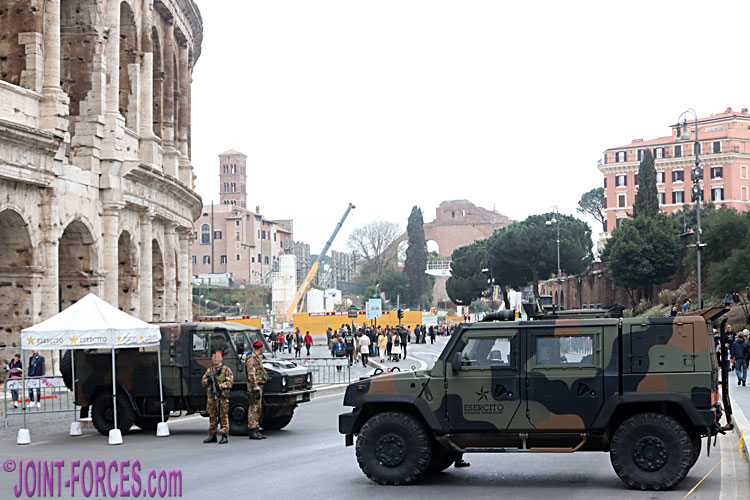 From 2008 Italian Army and Carabinieri personnel have been visibly supporting the Police on Operazione STRADE SICURE or Operation SAFE STREETS, writes Bob Morrison.

A recent long weekend break in Rome, coinciding with the first anniversary of the creation of JOINT-FORCES.com, gave me the opportunity to both take some snaps of troops and vehicles deployed on Operazione STRADE SICURE at tourist sites we visited and also chat to some of the English speakers about their mission. As I was under strict instructions from my companion NOT to spoil our rare few days off work by organising any formal facilities with the Italian Ministry of Defence this is just a brief overview and, as requested by officers and NCOs, I have pixellated faces and obscured vehicle registration plates.

STRADE SICURE is perceived by many to be a counter-terrorist deterrence operation but, although it does fulfil this role to some extent in the capital and Italy’s major cities, it was originally established primarily to provide additional personnel to the Prefects of Italy’s Provinces and Metropolitan Cities in order to maintain public order, to try to dissuade petty crime and to supervise sensitive sites and visitor attractions; in Rome the latter include both the numerous tourist magnet historical sites and the Metro stations. Originally 3,000 personnel from all four armed services – Army, Navy, Air Force and Carabinieri – were allocated to the operation but subsequently this number has more than doubled, with troops working both in parallel and in conjunction with the Police when on patrol and static duties.

The traditional maroon soft fez identifies this soldier as being a Bersagliere – the vehicle is a LINCE, known as PANTHER in UK service [©BM]

The bulk of the troops we talked to were from one of the Bersaglieri (Sharpshooter) regiments, recognisable by their traditional soft maroon fez with long blue tassel, but personnel from other Army units were also deployed at some Metro stations and transport hubs in the capital and Air Force personnel in combat uniform were deployed at Ciampino airport, plus we also spotted Carabinieri patrols at various locations. Armed Forces personnel deployed on Op. STRADE SICURE carry loaded personal weapons, wear body armour and operate in small squads broken down into mutually supporting pairs or trios; in this role they are effectively deputised as Public Security Agents with additional legal powers.

Every pair or trio of deployed troops we saw, with the exception of those guarding the Metro, had a vehicle close to hand and at semi-permanent checkpoints in the open they also had lightweight gazebos alongside to provide shade without obstructing their view. Army vehicles we spotted included the LINCE, Iveco VM90T and Land Rover Defender AR90, the Carabinieri vehicles we saw included both Defender AR90 and Land Rover Discovery, and the Italian Air Force were also using Defenders at the airport.

Another VM90T at a different location – standard Army personal weapon is the 5.56mm Beretta ARX 160 [©BM]

All troops we chatted to, after I explained I was a military photojournalist and showed them TRJE18 features from this website on my phone, gave the impression of being happy to be operating in the role of Public Security Agent and none of them grumbled at all. Indeed a couple said that although this operation was not the most exciting of routines, they could think of a lot less pleasant roles that they could be undertaking… and a lot worse places to be serving their country.

There is, however, a sting in the tail of this story. No doubt as a result of the high visibility Police and Military presence around all the major sights, which were rammed with tourists as Lent had just commenced to herald the build-up to Easter, we did not spot even a hint of trouble over the five days we spent trekking around the capital. However, on returning from one of Rome’s minor attractions to our hotel near the Vatican on a public bus at the end of our last day we were targeted by distraction thieves and I had a camera snatched along with a memory card on which some of the best of my Op STRADE SICURE images had been stored that afternoon. Ho hum!