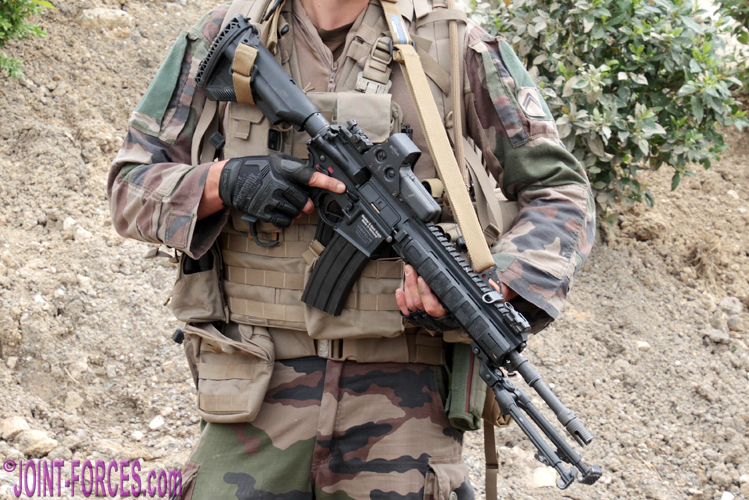 The French Army is replacing the FAMAS F1 assault rifle, affectionately known as the Bugle on account of its shape, in favour of the German HK416, writes Bob Morrison.

In March 2017 the French Ministère de la Défense announced: “After weeks of preparation, months of evaluations and tests, 54 days of shooting, 190,000 bullets fired, it is the HK416 rifle proposed by Heckler & Koch in its F version which was chosen to become the new assault rifle of French armies as part of the competition conducted by the Directorate General of Armament (DGA). Thanks to its qualities: reliability, robustness, precision and ease of use, this new small calibre weapon meets all the needs specified by the Army.”

First examples of the HK416F, as the standard French version is designated, were issued to instructors on a Train The Trainers course in June 2017 and units are now being gradually re-equipped, with final deliveries expected around 2027/8. Carl kept an eye out for the new weapon when covering Exercise COLIBRI LI in Southern France in April but the participating units were still using FAMAS F1 FÉLIN, however at the EUROSATORY defence expo in Paris this June we were able to photograph both variants – standard and carbine – being used by specialist troops during the French Army capability demo; note that the H&K weapons used by French Army Special Forces (COM FST) at the expo were not the new F-model but earlier A5 models purchased under an Urgent Operational Requirement.

Briefly looking first at the 5.56mm FAMAS F1, this French-designed rifle entered service in 1978 and was generally well-regarded, have served operationally in the 1991 Gulf War, the Former Yugoslavia and numerous African deployments as well as on various UN missions. Of bullpup configuration with its firing action and magazine well behind the trigger – like the Austrian Steyr AUG, British SA80, Chinese QBZ95, or Israeli TAVOR – it measures just 757mm but has a 488mm (19.2”) barrel. Effective range is 300 metres and rate of fire is 1000-1100rpm but one minor limitation is that the standard magazine holds just 25 rounds.

The 5.56mm HK416F model, of which the French Army will receive approximately 38,500 examples, utilises the 368mm (14.5”) barrel and will be issued primarily to frontline combat units. The HK416F-C, of which the Army will receive around 54,500 examples, has the 280mm (11”) barrel and, unlike the F-model, it cannot be fitted with the German manufacturer’s HK269F 40mm under-barrel grenade launcher which will be issued to one in four riflemen equipped with the standard infantry weapon.

The HK417, here with telescopic sight, is now replacing the FR-F2 as a sniper or sharpshooter rifle in some units [© BM]

The only main differences between the basic HK416 and the HK416F are new folding sights and a one-position gas valve, but the weapon is also fitted as standard with the HK416A2 ambidextrous buttstock and the flash-suppressor has been redesigned. Rate of fire is 850rpm and a 30-round magazine is standard. About 15,000 of the HK416F batch are expected to be fitted with the FÉLIN (Fantassin à Équipement et Liaisons Intégrés or Integrated Infantryman Equipment and Communications) system and these weapons appear to be marked VIGIFELIN on the receiver.

The French Army is also replacing its 7.62mm FR-F2 bolt action sniper rifle and it is the 7.62mm HK417 sibling of the HK416 which is currently being fielded. We also spotted one of these at the capability demo at EUROSATORY this June.