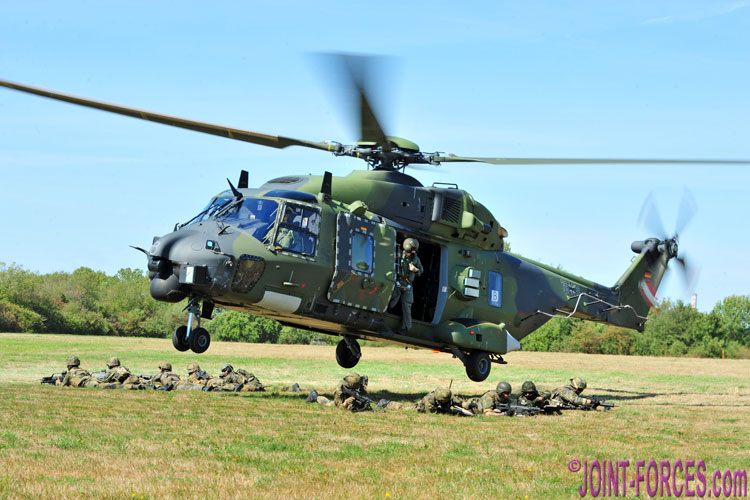 Today the Luftlandebrigade 1 ‘Saarland’ is Germany’s only remaining airborne brigade and falls under command of the Division Schnelle Kräfte, or Rapid Forces Division, writes Carl Schulze.

Fallschirmjäger regiment 26 recruits swear their oath to the German nation, declaring they will courageously defend its people’s rights and freedom [© Carl Schulze]

Standing in the lineage of its two predecessors Luftlandebrigade 1 can trace its history back to 1958 when Luftlandebrigade 26 was formed as first airborne brigade of the young Bundeswehr. On 18th of August 2018 the Luftlandebrigade 1 celebrated this 60th Anniversary with a public parade held in Saarlouis, including a group of new recruits swearing their oath.

Also part of the celebrations were capability demonstrations, stands with weapons, vehicles and equipment displays and parachuting displays. In one of the demonstrations Fallschirmjäger mit Erweiterter Grundbefähigung (EGB) Special Operations Capable trained paratroopers showed their close combat skills embedded into a raid against an irregular forces weapon storage site. In another demonstration Fallschirmjäger, supported by helicopters of the Germany Army and the German Air Force, assaulted an airfield in order to neutralise an enemy communication centre.

The celebrations were honoured by high ranking military personnel and politicians, including the Chief of Defence General Eberhard Zorn, the Chief of the German Army Generalleutnant Jörg Vollmer, the Prime Minister of the Saarland Tobias Hans and the Federal Minister for Economic Affairs and Energy Peter Altmaier.

Numbering some 4,500 troops and led by Brigadegeneral Dirk Faust Luftlandebrigade 1 today consists of the following units:

Luftlandebrigade 1 is a key asset in the national crisis response strategy of Germany. As such, the brigade maintains elements at high readiness that can deploy at short notice. In fact the brigade can be deployed much faster than all other brigades of the German Army.

The main mission of the brigade is to plan, prepare and execute specialised operations, including Non-combatant Evacuation Operations, Forcible Early Entry Operations or Operations Against Irregular Forces. As part of its mission, the brigade is capable to conduct two operations simultaneously at different locations far apart.

In addition, the sub-units of the brigade that consist of Fallschirmjäger mit Erweiterter Grundbefähigung (EGB) Special Operations Capable trained paratroopers are tasked to provide support to a Special Operations Task Force spearheaded by the Kommando Spezialkräfte (KSK) Special Force of the German Army.

In addition the brigade serves as operational reserve of the German Army and can be employed to conduct operations within the full military mission spectrum, ranging from Humanitarian and Disaster Relief Operations to high intensity warfighting as part of the defence of Germany or an NATO Article 5 Collective Defence scenario

New equipment including the 7.62 mm MG5 machine gun was showcased during the demonstrations forming part of the celebrations [© Carl Schulze]

As of 2018 the Division Schnelle Kräfte serves as lead formation for the international deployments of the German Army. Therefore well over 500 paratroopers of the Luftlandebrigade 1 are currently deployed with the Multidimensional Integrated Stabilization Mission in Mali (MINUSMA), European Union Training Mission Mali (EUTM Mali), the Operation Counter Daesh/Capacity Building Iraq and the Resolute Support Mission (RSM) in Afghanistan.