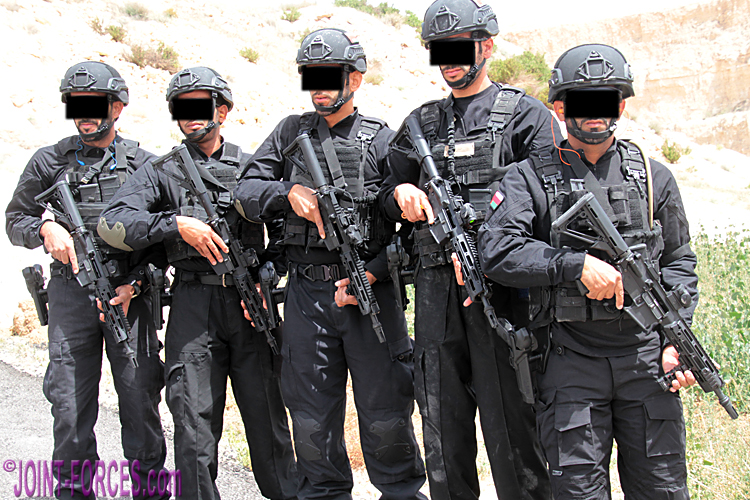 Day 2 of the 10th Annual Warrior Competition for international Special Operations Forces teams in Jordan continued in the afternoon with the PIPE HITTER, writes Bob Morrison.

After finishing the gruelling GUT-CHECK distance event, with its incorporated casualty treatment and recovery incident, following a quick lunch all forty teams participating at the 10th ANNUAL WARRIOR COMPETITION moved to the shooting ranges at KASOTC (King Abdullah II Special Operations Training Center). Here the teams would rely on their weapons skills rather than their stamina to earn points, engaging targets with both assault rifle and pistol and from different shooting positions. Undertaken on the 100-metre Manoeuvre Range C, this challenge was a five-man relay with each shooter leaving the box and moving rapidly along a marked (by cones) route to the first firing position where three standing targets had to be engaged from a prone position with an M4 assault rifle (or equivalent 5.56mm rifle if the team had brought its national weapons). Firing through a low level slotted hole in a barricade, the operator had to ensure his barrel did not protrude and all parts of his body were concealed by the board while firing; as always, paying close attention to the brief was essential for success.

With all three standing targets successfully shot, the operator then moved speedily to the second barricade from where four square targets at mid-height had to be engaged from the kneeling position with his assault rifle. These targets were at slightly different ranges and positioned in such a way that the shooter had to use both of two holes in the board to ensure a hit without exposing his body at either side – at least two of the GovSource team of instructors closely watched each competitor to ensure no infringements of the rules and a timekeeper followed him along the line.

The third barricade had six circular holes, at differing heights in an inverted triangle format, through which the operator had to engage a bank of falling plate targets. Behind cover of the barricade, he had to transition from assault rifle to 9mm pistol to drop the last six targets before sprinting back to the box and tagging the next competitor, who then repeated the circuit until all five team members had shot at every target.

Both speed and accuracy were required for this event, with tiered penalties being incurred for Procedural Errors, Missed Targets, Minor Safety Violations and Failure To Complete; in the event of a Major Safety Violation the guilty individual would have been immediately pulled from the event with the rest of the team continuing under a penalties handicap. In the final reckoning, the Chinese PAPF Team 2 came top and the Swedish Police Special Operations team (PIKETEN) took second place, pushing the Chinese PAPF Team 1 (Snow Leopards) down to third.

The Belarus SOF team who took first place in the GUT-CHECK event earlier in the day landed fourth place at PIPE HITTER, ensuring they stayed high on the leader board, and Austria’s COBRA, who were third in the morning’s event, took fifth place in the afternoon. After a punishing day the teams cleaned their weapons and returned them to the armoury then set about preparing for Day Three’s two events, namely The Great Escape, a drive & shoot scenario on the Driving Track, and McQuade, which was a sniper event in which all five of the team had to engage medium to long range targets using the designated sniper’s specialist weapon.