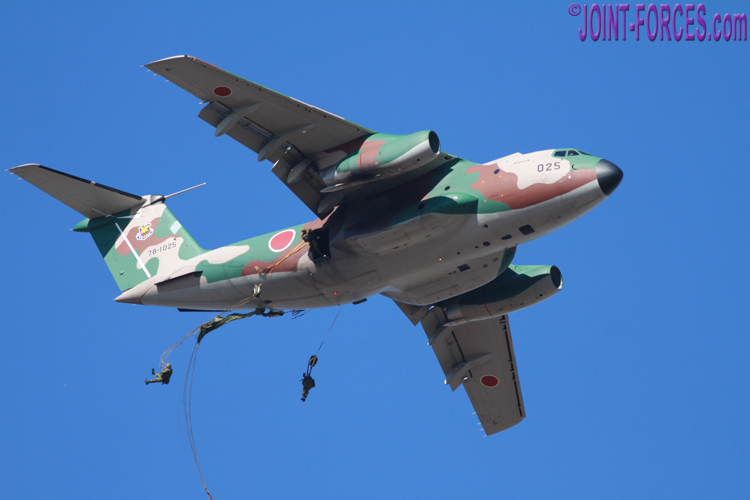 The blue wintry sky was filled with green canopies as parachutists floated steadily to the ground; overhead, Kawasaki C-1 and Lockheed Martin C-130H transport aircraft disgorged one paratrooper after another, writes Gordon Arthur.

As they jumped from doors on either side of the aircraft fuselages, the Paras tumbled earthwards before static lines whipped open their parachutes. Once on the ground, the hundreds of Japanese soldiers rolled up their canopies and quickly trotted off to assembly points.

This was the spectacle at Camp Narashino that we witnessed in Chiba Prefecture on the outskirts of Tokyo in mid-January. These Japanese soldiers were proud members of the 1st Airborne Brigade, and even Defence Minister Itsunori Onodera came to observe the demonstration and address the brigade. Some US Army paratroopers and Special Forces were also involved in this first jump of the year to underscore the importance of the Japan-US alliance.

Members of the 1st Airborne Brigade can parachute from a variety of JGSDF helicopters too, including the CH-47JA Chinook pictured here

The 1st Airborne Brigade of the Japan Ground Self-Defence Force (JGSDF) is an elite formation whose speciality is parachute and heliborne operations. Considered among the toughest soldiers in the JGSDF, the unit is about 2,000 strong and is tasked with quick-reaction functions such as combating guerrillas or enemy Special Forces, as well as conducting Non-combatant Evacuation Operations (NEO) at home or abroad. As part of their training regimen, paratroopers undergo Ranger qualification.

Interestingly, this brigade is one of only a few JGSDF units that could be considered as having an offensive capability. It is therefore a key part of Japan’s ‘dynamic defence force’, a concept introduced in the country’s National Defence Programme Guidelines (NDGP) document of 2011. This posture requires “readiness, mobility, flexibility, sustainability and versatility,” according to the NDPG.

Japan perceives serious threats from both North Korea and China, and to a lesser extent Russia. During the Cold War the biggest threat was the latter, but times have changed. In addition to the, possibly now reducing, ballistic missile and nuclear threat of Kim Jong-un’s regime, Japan fears North Korean guerrilla attacks, or China seizing some of its small islands in the southwest maritime area.

The Japanese-controlled Senkaku Islands (known to the Chinese as Diaoyu), for example, are claimed by China and have been the scene of growing tensions in recent years. Disaster relief is another function that the JGSDF responds to, with the country regularly beset by disasters such as earthquakes.

After being formally added in 2007, the 1st Airborne Brigade became a key element of the Central Readiness Force (CRF). The latter being a collection of formations totalling some 4,200 personnel. As well as the airborne brigade, the CRF contained the following units: CRF Headquarters and Headquarters Unit; 1st Helicopter Brigade; Central Readiness Regiment; Special Forces Group; Central NBC Weapon Defence Unit; International Peace Cooperation Activities Training Unit; and NBC Countermeasure Medical Unit. However, under another reorganisation, the CRF was abolished in March 2018, meaning that the 1st Airborne Brigade was then incorporated in the Ground Central Command.

This soldier, possibly from the Special Forces Group, is using a steerable MC-4 parachute

The JGSDF states, “The most significant characteristic of the Central Readiness Force is the capability to respond to the operational needs, both in and out of the country, with its high-mobile and specialised subordinate units.” This includes peacekeeping missions, with Japan currently deploying both a counter-piracy group based in Djibouti, and a United Nations contingent in South Sudan.

History: The Imperial Japanese Army and Imperial Japanese Navy were influenced by Soviet exercises and by the Wehrmacht’s campaign at the outset of World War II. They consequently established paratrooper units, with the Army possessing a Paratrooper Brigade and the Navy a Special Landing Force. These units were well armed and even had collapsible bicycles. Due to underdeveloped air transport capabilities, airborne operations contributed in only a minor way to Japan’s rapid conquest of the Far East in World War II.

Nevertheless, there were several notable Japanese uses of airborne landings during WWII. The Navy’s 1st Special Landing Unit conducted an operation with 334 paratroopers and 28 transport aircraft in the Dutch East Indies on 11th January 1942. Supporting an amphibious landing on the coast, their surprise attack on Langoan Airfield on Celebes caught the Dutch garrison of 1,500 soldiers by surprise. Despite 130 paratroopers killed or wounded, the airbase was completely in Japanese hands within hours, and fighter planes were immediately able to use the airstrip to support ongoing operations.

Other airborne operations were conducted by the Army’s 1st Parachute Force at Palembang on Sumatra on 14th February 1942 to seize an airfield and oil refineries. The navy performed another airdrop on West Timor on 20th February 1942. Additionally, the 3rd and 4th Parachute Regiments parachuted in to assault air bases on Leyte in the Philippines in December 1944. However, they could not achieve their missions because of powerful US Army firepower.

When the first platoon in the Airborne Brigade of the newly formed JGSDF was established in 1958, it therefore had a relatively rich heritage to call upon. The brigade grew in size and capability and, when the Special Forces Group was established in 2003, it took its initial cadre from the brigade. Indeed, this shadowy Special Operations unit – the equivalent of the US Army’s Delta Force – is still co-located at Camp Narashino alongside the 1st Airborne Brigade.

Another weapon sometimes seen in the 1st Airborne Brigade is the MinebeaMitsumi M9, usually referred to as the 9mm Machine Pistol

Around 170 members of the 1st Airborne Brigade deployed to Samawah in Iraq as part of the Japanese Iraqi Reconstruction Support Group, which had a continuous presence in the troubled country from 2004-06.

Footnote: Japanese Paratroopers have several different helicopters types at their disposal and to keep our rotary wing enthusiast readers happy we intend to produce an album of Gordon’s photos of some of these quite soon. Updated:~ The 5.56mm Minimi light machine gun is produced under licence by Sumitomi Heavy Industries – this photo was taken in Australia in 2017