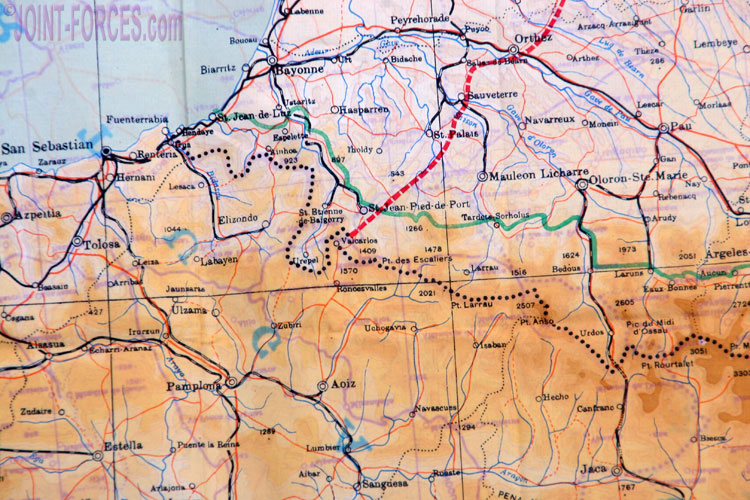 In this first in a series of Escape & Evasion articles we briefly look at the difficulties and challenges faced by Allied Escapees & Evaders in World War Two, writes Robert Shaw.

Last summer I turned back the clock and spent my annual leave travelling by Klepper canoe around the islands of Croatia’s Dalmatian Coast, mostly living off the land and using Survival techniques and equipment, often dating in concept back to WWII, to minimise the need for external support. This year, for a different challenge, I have decided to walk the wartime Escape & Evasion route over the Pyrénées between the former Occupied France and Neutral Spain.

There are several good books and documentaries on WWII E&E, including this recent one by former Commando Monty Halls.

My first task was to do some research to determine the best Escape Line to walk in the time available. My concept was to retrace the steps of those Evaders that had used the Lines during World War Two to return to Britain, and to operations, and I decided to pick a route that would be challenging physically but would not need specialist mountaineering or extreme weather equipment or clothing.

The MI9 department was set up in 1940 to both interrogate Axis Prisoners Of War (PoW) and debrief Allied personnel that had successfully evaded or escaped from captivity. The debriefing of escaped PoWs had been carried out at the end of The Great War (World War One) to identify lessons that could help in future conflict, but it was only in WW2 that a formal organisation was set up to collect and analyse the information and to identify methods and means to assist evaders and escapees to return to operations. Those that were successful in returning home were used to instruct others and pass on ‘best practice’ to units.

During WW2, those that had not been captured upon finding themselves behind enemy lines were considered Evaders and those that had been held in captivity for longer than 30 minutes and escaped were considered Escapees. Statistically, the majority of successful Evaders were aircrew and the army made up the most successful Escapees. Although technically anyone could be captured, the roles considered most ‘prone to capture’ were Aircrew, Commandos, Airborne and Special Forces, Sailors that were adrift or washed ashore, escaped POWs and military personnel that were ‘cut off’ and were trying to return to their own lines.

It was not easy for personnel to successfully evade or escape from capture and return to Allied lines. Difficulties included: the language barrier, there were 14 major language groupings in Europe and even if personnel spoke French or German there were regional accents to consider; large populations of ethnic Germans that lived in occupied Europe that were pro-German – there were also local nationals that were pro-Fascist similar Mosley’s Black Shirts in Britain; religious divides with differing customs; the weather – the two coldest years in the 20th century were 1941 and 42; and inappropriate clothing – whereas army clothing was practical for ease of movement and camouflage, aircrew clothing was designed to keep aircrew warm in high altitudes in unheated aircraft and not for cross country movement.

Natural barriers included: mountains – the neutral countries of Switzerland and Spain could only be entered on foot by crossing the Alps and the Pyrénées respectively; water obstacles – canals and waterways provided opportunity for travel but were also checked and patrolled by German and local forces; and distance – escapees from PoW camps in occupied Poland would have to travel thousands of miles on limited food and with potentially appalling weather. Other difficulties included German and local forces both manning checkpoints and patrolling, and employed collaborators and intelligence personnel that had penetrated Escape Lines

In the next article we will look at those advantages the Escapees and Evaders had.