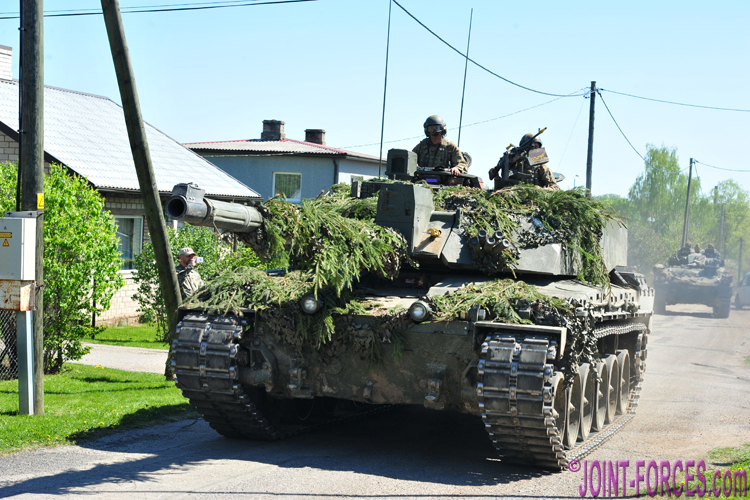 The UK Ministry of Defence has announced that around 8,000 troops will exercise across Europe on the usual round of pre-planned exercises.

Press Release, Whitehall, 28 April 2022: [Strictly Embargoed until 29 April] Around 8,000 troops from the British Army will conduct a series of planned exercises across Europe this summer in one of the largest deployments since the Cold War.

The exercises will see 72 Challenger 2 tanks, 12 AS90 tracked artillery guns and 120 Warrior armoured fighting vehicles deploy to countries from Finland to North Macedonia, demonstrating the Army’s modernisation into a lethal, agile and global force.

Tens of thousands of troops from NATO and Joint Expeditionary Force (JEF) allies and partners are involved in the exercises. The high readiness forces from the Lead Armoured Task Force and Air Manoeuvre Task Force will take part.

Defence Secretary Ben Wallace said: “The security of Europe has never been more important. These exercises will see our troops join forces with allies and partners across NATO and the Joint Expeditionary Force in a show of solidarity and strength in one of the largest shared deployments since the Cold War.

“Operating across Europe, the British Army will stand alongside partners, combining our capabilities and shared values, promoting peace and security.”

The programme follows the Defence Secretary’s ‘Future Soldier’ announcement last November, setting out how the British Army is evolving into a more lethal, agile, and global force in line with the UK Government’s Integrated Review. These exercises showcase the Army’s capabilities and readiness, demonstrating the central role it plays in NATO deterrence.

Troops from B Squadron of the Queen’s Royal Hussars have deployed to Finland this week to take part in Exercise ARROW. They will be embedded into a Finnish Armoured Brigade, with participation from other partners including the US, Latvia and Estonia. The exercise will improve the ability of UK and Finnish troops to work alongside each other as part of the JEF, deterring Russian aggression in Scandinavia and the Baltic states.

In May, Exercise HEDGEHOG [SIIL]will see the Royal Welsh Battlegroup and the Royal Tank Regiment exercising on the Estonia-Latvia border alongside 18,000 NATO troops, including French and Danish, who are part of the British-led NATO enhanced Forward Presence. HEDGEHOG is the biggest military exercise in Estonia and takes place every four years.

Commander Field Army Lieutenant General Ralph Wooddisse said: “The UK makes a significant contribution to the defence of Europe and the deterrence of Russian aggression. The British Army’s series of exercises is fundamental to both. We continue to deploy across Europe, from the Baltic to the Aegean, to train and fight alongside our allies and partners, providing powerful, capable and ready forces to support NATO and show the UK’s commitment to peace and security.

“A wide range of units from the Field Army will be involved, from light and airborne forces, to helicopters and armoured forces, supported by artillery, electronic warfare, air defence, surveillance drones, engineers and logisticians. The scale of the deployment, coupled with the professionalism, training and agility of the British Army, will deter aggression at a scale not seen in Europe this century.”

Alongside Exercise HEDGEHOG, Exercise DEFENDER [DEFENDER-Europe] in Poland is ongoing until late May, with 1,000 soldiers from the King’s Royal Hussars Battlegroup and C Squadron of the Light Dragoons deployed alongside troops from 11 partner nations including Poland, Denmark and the United States. This exercise involves Challenger 2 tanks and other armoured vehicles deploying from the NATO Forward Holding Base in Sennelager, Germany. The deployment is supported by 104 Theatre Sustainment Brigade operating from the UK and in bases in Europe.

Exercise SWIFT RESPONSE, which also began this week, sees elements of 16 Air Assault Brigade Combat Team and 1 Aviation Brigade Combat Team operate alongside French, American, Italian, and Albanian counterparts in North Macedonia. There are 4,500 personnel on the exercise including 2,500 British troops. The exercise involves parachute drops, helicopter-borne air assaults and sees a company of French paratroopers integrated into the 2 Parachute Regiment Battlegroup and an Italian battlegroup working to a British chain of command.

These exercises showcase the scale and significance of the British Army’s contribution to the defence of Europe and highlight the continued importance of the leadership role which UK plays as a member of NATO and the JEF.

In addition to the Army’s programme, the UK will deploy a major headquarters to the Baltic region, in support of the JEF. The Standing Joint Force HQ (SJFHQ) will establish three linked nodes – in Latvia, Lithuania and the third at their home base at Northwood HQ in London, the first operational deployment for the headquarters. The UK is the framework nation for the JEF, a coalition of like-minded partners, able to respond rapidly to crises in the High North, North Atlantic, Baltic Sea region and further afield. Over 200 military personnel are involved in the operation, including specialists in cyber, space and information operations.