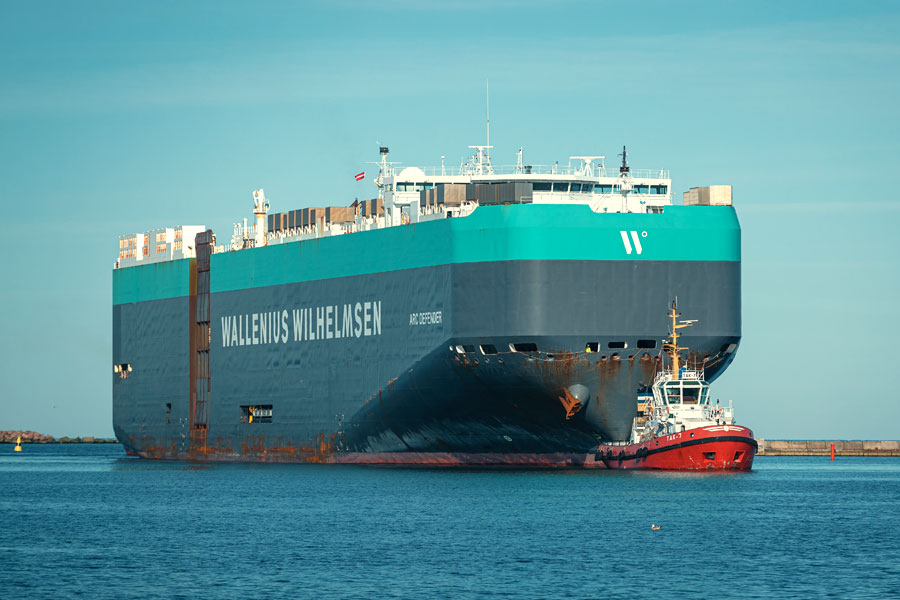 A significant quantity of US military materiel has arrived in Liepāja to participate in the NAMEJS 2022 training cycle and the DEF22 deployment.

Press Release, Riga, 19 April 2022: [Auto-translated] On 18 April the commercial cargo ship ARC Defender arrived in the state in Liepāja, from Charleston South Carolina, delivering more than 350 items of military and support equipment to the United States Armed Forces, which will participate in the international military exercise DEFENDER-Europe 2022 in the Baltic Sea and Eastern Europe in the coming weeks.

For the first time in its history, the port of Liepāja has become a destination for transporting US military units across the ocean. The delivery to Europe of a significant quantity of advanced military equipment from the US Armed Forces, including towed artillery units and high-mobility missile artillery systems (HIMARS), demonstrates the US as a reliable strategic security partner ready and able to guarantee the protection of Allies in Europe. The compatibility of military equipment units brought from the United States with the armed forces of other Allies will be practically trained in several simultaneous exercises in several NATO member states in Europe.

The arrival of US military cargo in the port of Liepāja provided practical training for the personnel of the National Armed Forces, performing one of the main support functions of the host country – RSOM (Reception Staging and Onward Movement) . This complex function includes not only the reception of forces, but also the provision of their temporary stay, preparation for further movement and transportation or escorting of forces to specified destinations.

The US Army Relocation Coordination Center and the 1st Regional Security Center, as well as the [Latvian] Navy, the Military Police and the 4th Kurzeme Soldiers of the National Guard, participated in the US military reception operation, security, logistics and day-to-day support and relocation support measures from the National Armed Forces. and land guards. Latvian soldiers and land guards carried out the port operation and the host country’s support function in close cooperation with US Armed Forces personnel.

As previously reported, the exercises planned within the framework of DEFENDER Europe 2022 [DEF22] in Latvia are part of the spring phase of the military training cycle ‘NAMEJS 2022’, which will take place practically throughout May and includes four more international exercises: KNIGHT LEGION, SWIFT RESPONSE, SUMMER SHIELD, and HEDGEHOG, as well as the tactical level military field exercises of the National Armed Forces. The total number of personnel from the Allied States in the spring phase of NAMEJS 2022 will be about 3,000, and a total of about 2,700 soldiers and bodyguards from the National Armed Forces will participate.

The Defender Europe 2022 exercise is planned in advance and is led by the US Army Europe and Africa. The regular conduct of international military exercises in Latvia and other Allies, and the broad involvement of Allies in such exercises, play a key role in training and strengthening NATO ground, air and naval cooperation at the strategic, operational and tactical levels, demonstrating collective defence capabilities and joint readiness. to protect every member of the Alliance from all kinds of security threats.

For the attention of the [Latvian] population: The spring phase of the military training cycle NAMEJS 2022 began on April 18 with the arrival of the ocean cargo ship ARC Defender in the port of Liepāja, bringing US military equipment to participate in the training. Already at the beginning of May, this equipment will be transported further to training venues in Latvia and other NATO member states.

The National Armed Forces reminds that during the training until May 27 in Kurzeme, Vidzeme, Zemgale and Latgale there will be movement of Latvian and allied soldiers and military equipment along the main and regional roads of the country. The escort of military columns along Latvian roads is ensured by the Military Police, the State Police or the Relocation Coordination Center.

The exercises will also include periodic flights of various military aircraft, including combat helicopters AH-64 Apache, in Latvian airspace, and these flights will be conducted in accordance with Latvian laws and regulations in the field of airspace use. military exercises aimed at improving national defence capabilities and strengthening regional security.

In order to ensure the awareness of the Latvian population, in the coming weeks the National Armed Forces will regularly publish up-to-date information on the movement of Allied military equipment, host nation support tasks and deployment of Allied forces for training, as well as major training activities in various regions of Latvia.