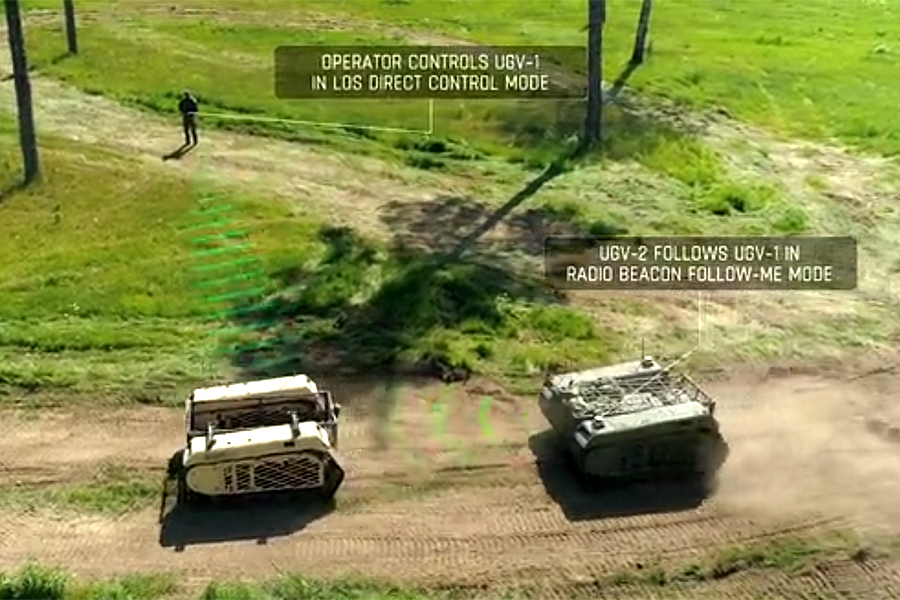 Milrem Robotics has exhibited their Intelligent Functions off-road capabilities at the first demonstration of the iMUGS project.

The autonomy demonstration was performed using two THeMIS unmanned ground vehicles. First, one THeMIS UGV followed a human operator walking along a path with various obstacles. Second, the operator took control of the first UGV using Line of Sight (LoS) control and set the second THeMIS to follow the first one from waypoint A to B.

After a successful performance, the second THeMIS was commanded to return home via Milrem’s Intelligent Functions Integration Kit’s (MIFIK) Mission Planner. While en route, the operator stepped in front of the UGVs path to trigger its obstacle detection and auto-stop feature. After the operator had passed through the UGVs path, the vehicle continued its way to its home point.

“Intelligent functions are a crucial part of unmanned systems as they allow soldiers to concentrate on their mission rather than focusing on operating the system. Unmanned ground systems with follow-me, return home, and point-to-point navigation functionalities considerably enhance the fighting capability of units,” said (Reserve Captain) Jüri Pajuste, Defence R&D Director at Milrem Robotics.

Kuldar Väärsi, CEO of Milrem Robotics added: “MIFIK will be delivered to several THeMIS users around the world already this year. Starting from 2022, certified autonomous and intelligent functions will be part of THeMIS’ basic configuration. THeMIS + MIFIK users will receive annual updates with new capabilities and enhancements.”

The autonomy demo was performed with the first demonstration of the iMUGS project that aims to develop the European standard unmanned ground system. During the iMUGS demonstration, the projects consortium partners showcased how the THeMIS can be deployed onto the battlefield using common Armoured Personnel Carriers (APC) and teamed with unmanned aerial systems. The specific technology used was the Boxer APC by Krauss-Maffei Wegmann (KMW) and a tethered drone by Acecore Technologies. A multirotor drone by Atlas Dynamics was also part of the scenario.

Altogether two scenarios were played out in cooperation with the Estonian Defence Forces. In the first scenario, the THeMIS integrated with Acecore’s tethered drone was operated Beyond the Line of Sight (BLOS) by the soldiers and used to detect and target an enemy position. After determining the target indirect fire was ordered and an after-action review was performed using the drone footage.

The purpose of the second scenario was to retrieve a casualty from a crashed vehicle and afterwards retrieve the vehicle. Both actions were performed with the THeMIS UGV while the Boxer towed the UGV into the mission area and Atlas’ drone provided overwatch and situational awareness.

The requirements for the standardized UGS have been set by seven EU member states Estonia, the leader of the project, and Belgium, Finland, France, Germany, Latvia, and Spain.

Milrem Robotics is the European leading robotics and autonomous systems developer and systems integrator. The company has two offices in Estonia, one in Sweden and Finland and shortly one in the Netherlands.