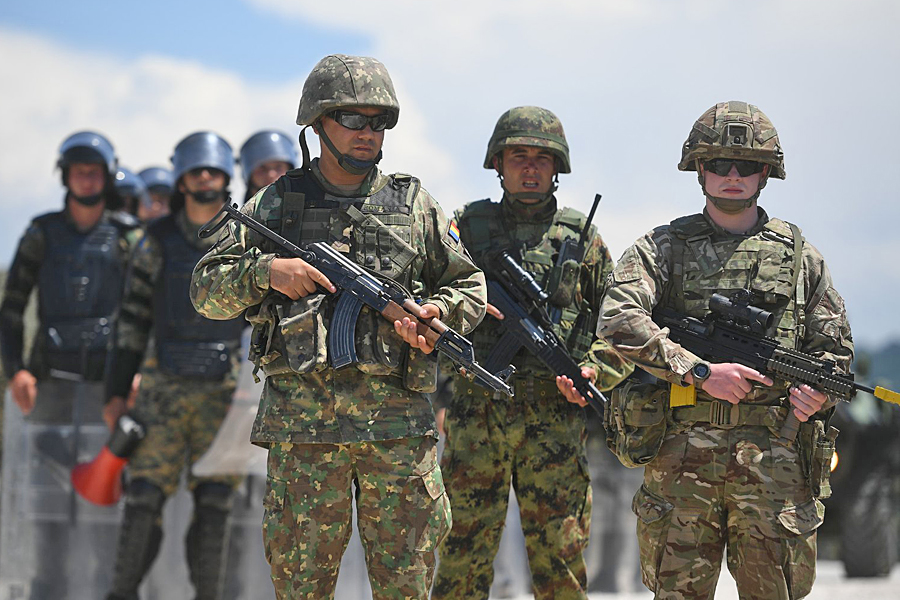 The UK and Serbia will enhance their cooperation on defence and security, UK Defence Secretary Ben Wallace has confirmed during PLATINUM WOLF.

The UK and Serbia will enhance their cooperation on defence and security issues, Defence Secretary Ben Wallace has confirmed. In the first ever official visit of a UK Defence Secretary to the country, Mr Wallace met with Serbian President Aleksandar Vucic and Minister of Defence Nebojša Stefanović to discuss how our two countries’ militaries can cooperate further and support shared efforts to protect security in the Western Balkans.

The recently published Defence Command Paper outlined that in an age of global and systemic competition, our Armed Forces would be persistently globally engaged with partners around the world. Our growing defence relationship was demonstrated to both Mr Wallace and Mr Stefanović on a visit to Exercise PLATINUM WOLF, a Serbia-hosted multinational exercise of 11 countries to which the UK is this year’s largest contributor.

Defence Secretary Ben Wallace said: “Our open societies are witnessing a rising tide of threats that cross borders and often occur below the threshold of conflict.

“As our recently-published Defence Command Paper made clear, developing close partnerships is crucial to building the resilience needed to counter such threats and that’s why I’m delighted we’re expanding our defence cooperation with Serbia.”

Following meetings in Belgrade, the Defence Secretary and his counterpart signed a bilateral document which will expand the ambition of our two nations’ defence engagement and open up new opportunities for joint training. Mr Wallace also reaffirmed the UK’s enduring commitment to European security, as set out in the recently published Integrated Review and Defence Command Paper, which includes a commitment to working closely with Western Balkans partners to maintain and promote regional and international peace and security.

That ambition was demonstrated on Exercise PLATINUM WOLF, where a UK company consisting of 70 troops from 3 SCOTS, 2 RIFLES and 8 RIFLES is the largest contribution to the international exercise that also features forces from Bosnia and Herzegovina, Bulgaria, France, Greece, Hungary, Romania, Slovenia, Serbia and the United States of America.

While in Serbia the Defence Secretary also opened a memorial to the successful evacuation of the UK Special Operations Executive personnel and Allied Airmen from behind enemy lines in what was then Nazi-occupied Yugoslavia. Alongside local troops and villagers, British personnel directed the construction of an airfield under the Nazis’ noses. The airfield was used to evacuate 2,400 Allied Airmen, 11,000 wounded Partisans and 400 wounded civilians between May 1944 and June 1945. The memorial unveiled by the Defence Secretary was made by metalsmiths from 4th Armoured Close Support Battalion of the Royal Electrical and Mechanical Engineers with the support of 22nd Engineer Regiment and brought over from the United Kingdom.