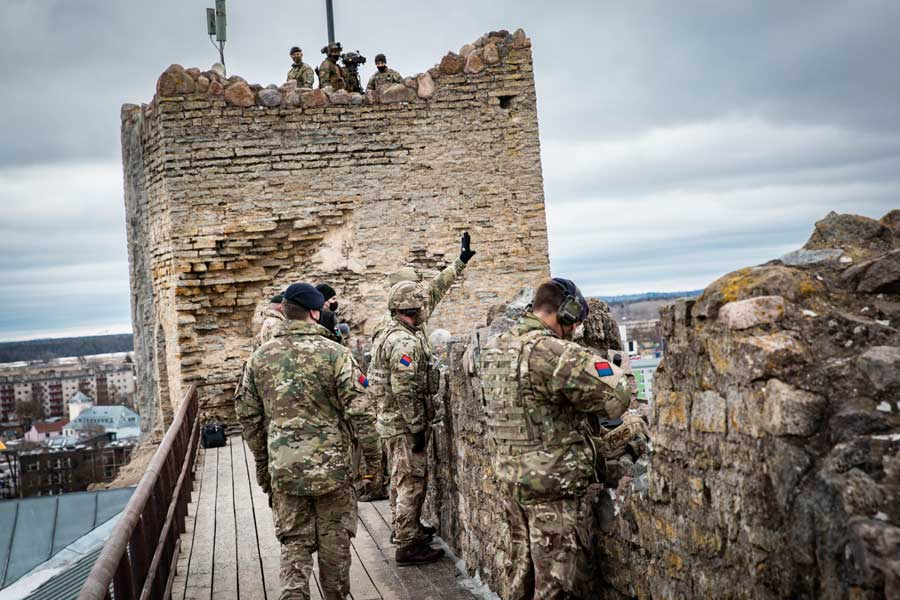 On FURIOUS WOLF British, Estonian and Lithuanian JTACs are practising air-ground comms with Italian and German Eurofighter jets over Estonia.

Press Release, Tallinn, 04 March 2021: [auto-translated] Over the next two weeks, Allies, including Estonian, Lithuanian and British [TACP] air controllers, will practice air-ground communications with Italian and German Eurofighters flying over Northern Estonia as part of the FURIOUS WOLF exercise.

“The FURIOUS WOLF exercise is a great example of the unity and cooperation of different NATO forces,” said Colonel Paul Clayton, Commander of the Allied Battlegroup in Estonia. “The opportunity to conduct international exercises in every aspect, where in this case the Italian Eurofighters are controlled by the air controllers of the Baltic and Allied battle groups, shows not only the integration between the different units, but also the capabilities and readiness of NATO forces.”

According to Major Tanel Rattiste, Commander of the Air Force Air Support Squadron, such exercises between the Allies are of considerable importance. “FURIOUS WOLF created good conditions for practising cooperation between the air controllers of the Allied Battle Group in Estonia and the air controllers of the Estonian Air Force in order to create a common understanding of providing air support to manoeuvring units.”

The FURIOUS WOLF exercise takes place in the Baltics twice a year, with the aim of strengthening co-operation and enhancing integration between the various elements of NATO forces in Estonia, Latvia and Lithuania. This year, the FURIOUS WOLF exercise started in Lithuania, where the participants gathered for the first half of the exercise to cooperate with the Italian Eurofighter Typhoon pilots at Šiauliai air base. In the second half of the exercise, air controllers will work in the Tapa military town and around Rakvere fortress.

A Joint Terminal Attack Controller (JTAC) is a certified and qualified person who, from a forward position, directs the attack of combat aircraft against hostile targets in the immediate vicinity of a manoeuvring unit.