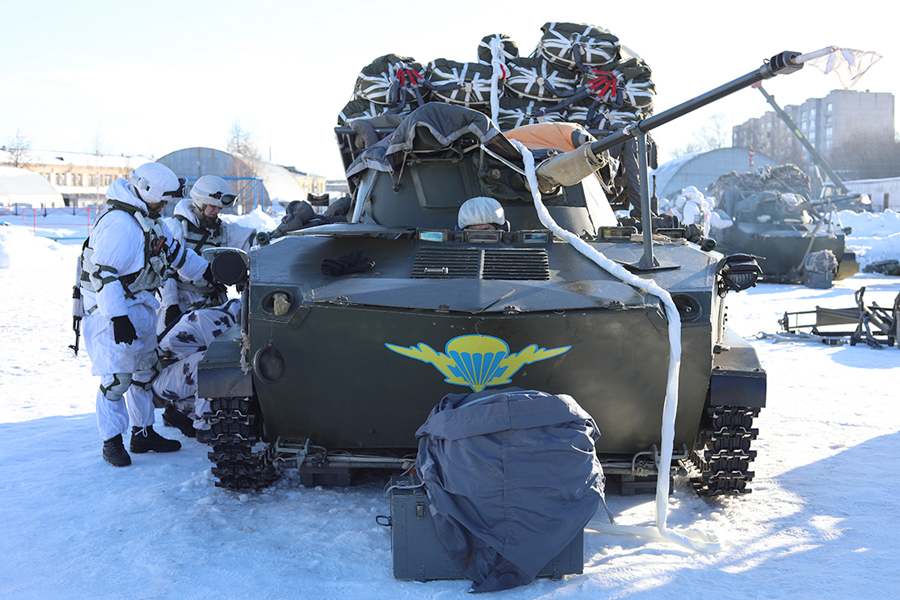 Russian Federation News Release, 04 April 2021: About 60 units of combat and special equipment were prepared for loading and landing during the second stage of a tactical exercise with units of the Ivanovo Guards paratrooper regiment

The day before, the second stage of a tactical exercise started with a reinforced paratrooper battalion of the Guards Ivanovo parachute regiment, where combat vehicles were rigged in the waiting area. In the early morning, the paratroopers made a 30-kilometre march on standard equipment from the concentration area to the waiting area, where they began to prepare the BMD-2K-AU for landing.

The crew for preparing equipment for landing includes seven paratroopers – this is a regular paratrooper squad and the crew of an airborne combat vehicle, where each of them knows their actions and task when mooring equipment. In accordance with the established standards, the time for preparing equipment for landing, namely, airborne combat vehicles, ranges from 45 minutes to 1 hour 15 minutes. In less than one hour, the crews moored more than 60 combat vehicles, which will require more than 20 Ilyushin Il-76MD aircraft to land. After the completion of the rigging, the battalion units made a march to the take-off airfield, where in the morning they would start loading the equipment onto the aircraft.

In total, more than 700 personnel are involved in the exercise, about 100 units of military and special equipment and seven Il-76MD aircraft of military transport aviation. Colonel Viktor Gunaza, commander of the Ivanovo Guards airborne unit, is in charge of the exercise.