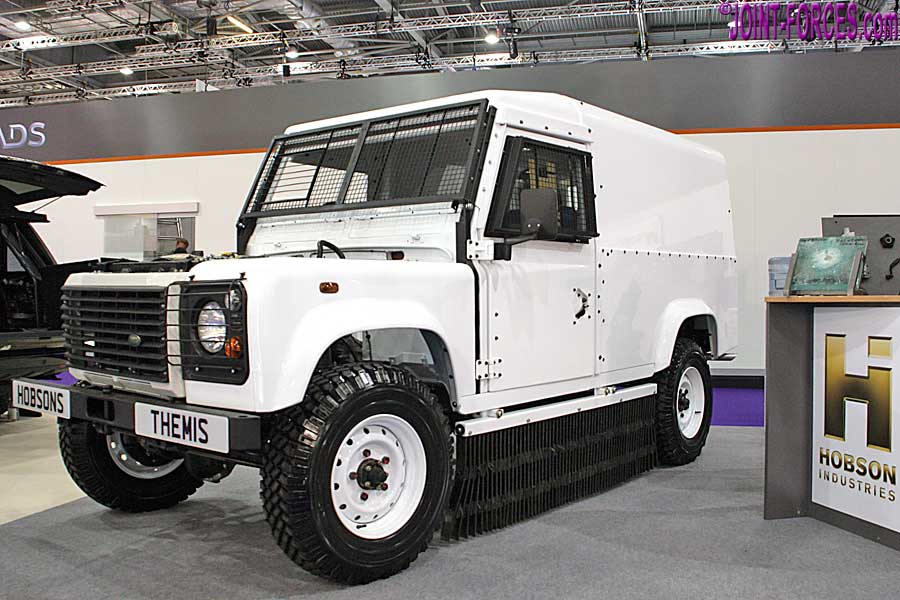 THEMIS Characteristics for a lightweight and a highly mobile blast and ballistically capable vehicle complete with through life support are:

The re-purposed and upgraded and ballistically protected CAV 100 SNATCH and Land Rover WMIK Gunship platforms fitted with the THEMIS armour system will be on display on Hobson Industries on the Off Road Centre at the MoD DVD Exhibition being held at Millbrook Proving Ground on the 21st and 22nd September 2022.

Peter Hobson, Managing Director of Hobson Industries said, “Protection of light 4×4 vehicles on the battlefield has often been hampered by payload issues, thus armour and protection is limited to providing a vehicle with the protection and mobility within these parameters. Wars and conflicts show that cunning adversaries use overmatch techniques to defeat these protection systems to destroy these vehicles and their occupants on the battlefield. The harrowing photographs of soldiers and their vehicles being decimated by IEDS in Iraq and Afghanistan created a rush by the Allied Forces to produce a range of light vehicles with adequate protection for their occupants. The development of the THEMIS Armour System can be traced back to the Northern Ireland conflict of the early 1990s.”

The THEMIS Armour System: The base point for THEMIS is the SNATCH VIXEN CAV 100 S2 glass pod (or similar product), protected with a much-reduced thickness of high hardness steel. Previously the .556 and M193 rounds traditionally took more than 8mm of high hardness armoured steel to achieve. Peter’s knowledge of the physics associated with the ballistic event and the broad understanding of the properties of ballistic materials set about finding a lightweight ballistic protection system. This has been achieved at STANAG Level 1+ at around 50kg m² with the THEMIS armoured pod system and is probably lightest armoured lightweight vehicle in use at this time. The system can also be fitted as an appliqué system for upgrades to current in-service vehicles.

The THEMIS development caught the eye of a UK Government customer and Hobsons was tasked to supply a test vehicle for evaluation. The vehicle was independently ballistically and blast tested to PAS300 methodologies. Vehicle handling characteristics have also been independently validated and certified to PAS301.

“The THEMIS system is a quantum leap in ballistic event management with appliqué armour at around 20kg² on a CAV100 SNATCH pod upgrade and as a full ballistic solution to STANAG Level 1+ at around 50kg² for new vehicles. The THEMIS armour system is a result of a combination and understanding of ballistics, physics and knowledge of materials in integration and this opens up areas of ballistic management protection solutions to both new vehicle design and post design for existing in-service light armour protected vehicles.” Peter Hobson continued.

¤ Footnote: THEMIS is the Goddess of Justice and had the power to put a protective shell around the people she loved and this is exactly what Hobson’s THEMIS appliqué armour system achieves.