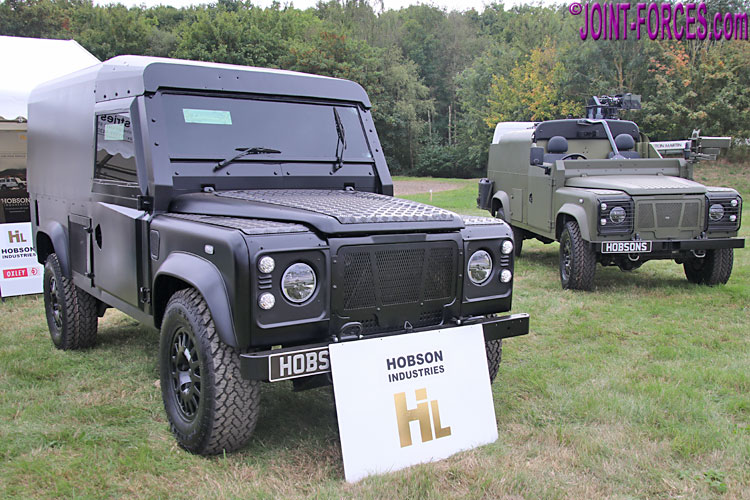 On 29th June Hobson Industries launched their THEMIS Armour System for use on lightweight 4×4 vehicles and promised to unveil it at DVD 2022, reports Bob Morrison.

Hobson Industries Limited, formed in the mid-1980s by former Royal Navy Chief Weapons Engineering Officer and champion rifle marksman Peter Hobson, has a very long tradition in the lightweight armoured vehicle field but much of their work has necessarily been undertaken with minimal publicity. The latest THEMIS Armour System, a product name like their THETIS which derives from Barbara Hobson’s knowledge of Greek mythology and not to be confused with the Estonian THeMIS tracked unmanned vehicle, uses an appliqué composite armour married to a pressure formed fibreglass pod to give increased mine and bullet protection at reduced weight. For a little more detail read Hobson Industries Launches THEMIS Armour System … but don’t expect to learn any trade secrets about the armour.

Hobson’s have disclosed that vehicles similar to the black THEMIS Internal Security Vehicle demonstrator shown at DVD 2022 are “in UK Government service” but on client confidentiality and security grounds they are unable to reveal precisely who has procured them (though by process of elimination and knowing which specialist vehicle fleet has been overdue for urgent replacement we suspect we might know). The company also could not confirm or deny whether these THEMIS Armour System vehicles were built on Land Rover Defender chassis, but as any suitable light 4×4 utility vehicle with a traditional ladder chassis (such as say the G-Class or the new Grenadier or even the 70-series Land Cruiser) could be fitted with this type of protected pod we will just need to keep our eyes peeled. Incidentally, Hobson’s actually had one of the new Ineos Grenadiers on their stand at DVD, put Peter warned us not to jump to hasty conclusions.

The second THEMIS Armour System demonstrator on the DVD 2022 stand was a protected WMIK-style vehicle, which still allows the type of crew situational awareness this type of long range recce / patrol vehicle needs but offers more protection than found on current the Land Rover Defenders used by the British Army, and others, in that type of role. In addition to the composite armour protective pod, this vehicle was fitted with the new FNH UK (formerly MANROY) 12.7mm / .50cal machine gun soft mount which was on its first public outing. Peter stressed to us that this light gunship, which Barbara has christened DEIMOS after the Greek god of dread and terror, was purely a concept prototype and potential users had already recommended a design modification to the front bulkhead, based on personal operational experience, which Hobson’s are currently looking into incorporating before the vehicle’s next outing. Hobson’s told us if necessary it is perfectly feasible to refurbish and modify current in-service and/or recently cast vehicles to give increased protection levels without the need for investing in expensive new fleets. Food for thought?