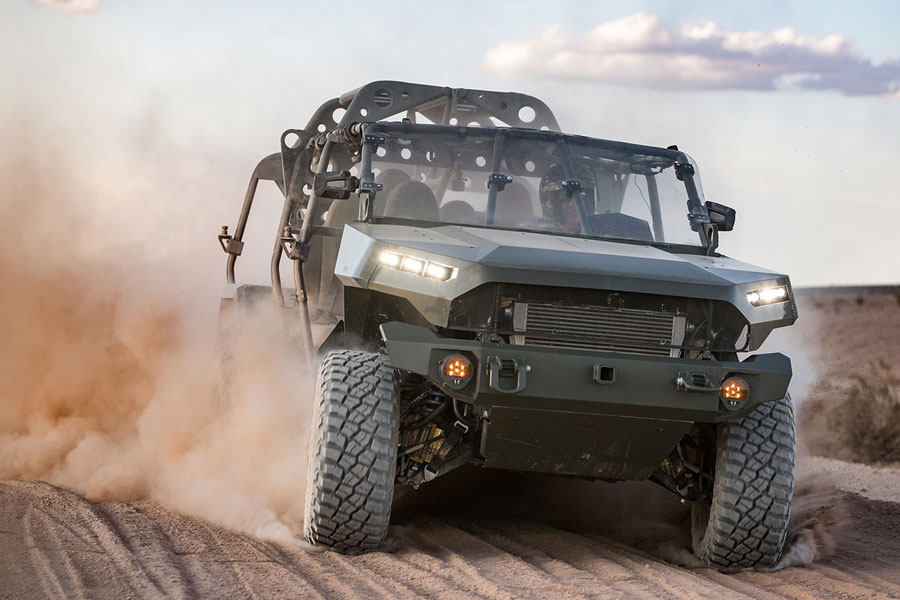 The US Army has selected a GM Defense Chevrolet Colorado ZR2 derivative as its Infantry Squad Vehicle to motorise Infantry Brigade Combat Teams.

Delivery of this modernised capability is slated to begin with the 1st Brigade, 82nd Airborne Division, as the designated First Unit Equipped next winter. The contract is valued at $214,297,869 and the Army intends to purchase 649 vehicles. It is based on the Chevrolet Colorado ZR2 architecture, which will derive 90 percent of its parts from commercial-off-the-shelf components.

The ISV programme provides IBCTs an additive lightweight vehicle to move Soldiers and their equipment quickly over complex and difficult cross-country terrain. ISVs will provide greater mobility to IBCTs, as they are designed to move across restrictive terrain, allowing Soldiers to close on objectives with less fatigue and greater readiness. The Army can deliver the vehicle to the field by airdrop or helicopter, which increases the flexibility of Soldiers on the move.

This is the second important production contract award for Army light tactical wheeled vehicle modernisation programmes of record in the last year. The Army announced in June 2019 the production contract of the Joint Light Tactical Vehicle. JLTV is modernising the Army’s and US Marine Corps’ light tactical wheeled vehicle fleets with a leap-ahead balance of payload, performance and protection.

“As the Army’s newest light tactical vehicle, ISV will allow IBCTs more flexibility and a greater advantage getting to the objective,” he added.

The ISV’s basic operational capabilities include:

The comprehensive team responsible for bringing the ISV programme to production contract award involves not only Army acquisition professionals, but also relevant stakeholders representing the Army’s funding and testing communities, Army Futures Command, and Forces Command. Soldier evaluation via user-acceptance efforts has been a key element of the ISV programme from the outset, and has helped compress the time it takes to field a modernised capability that meets infantry Soldiers’ needs.

“Using an innovative acquisition approach through an Other Transaction Authority — a flexible, collaborative tool designed to speed acquisition and modernisation — the ISV team awarded the production contract for this capability in 16 months. Using normal acquisition processes, it could have taken as many as 36 months,” Goddette explained.

The ISV acquisition strategy was structured to promote the highest level of competition possible, including affordability. Due to competition, the programme office will realise a reduction from the original independent government cost estimate for the programme. This provides best value to American taxpayers. What’s more, a senior Army officer who has commanded at all levels in an IBCT was tapped to serve as the ISV programme’s Source Selection Authority.

According to Steve Herrick, the Army’s product lead for Ground Mobility Vehicles, PEO CS&CSS, the next steps in the ISV programme include GM Defense delivering eight ISVs to Aberdeen Test Center in Maryland within four months. “Following delivery, our programme office, along with Army testers, will execute an aggressive and tailored testing plan,” he said.

Herrick went on to explain the Army will conduct tailored production qualification testing to address the vehicles’ ability to meet the performance specifications in areas not previously tested. This will also build confidence in areas already tested, he said. The ISV will also undergo transportability certification, which includes low-velocity air drop and helicopter sling loading. Next summer and fall, the Army will hold an initial operational test and evaluation.

“The programme office is marching toward delivering ISVs to the first unit, the 1/82nd at Fort Bragg, approximately eight months after the contract award,” Herrick added. “We are excited about the commercial nature this product brings to the Soldier, and in the future, we could possibly see greater leaps in technology and concepts to include reconnaissance or electric vehicles.”