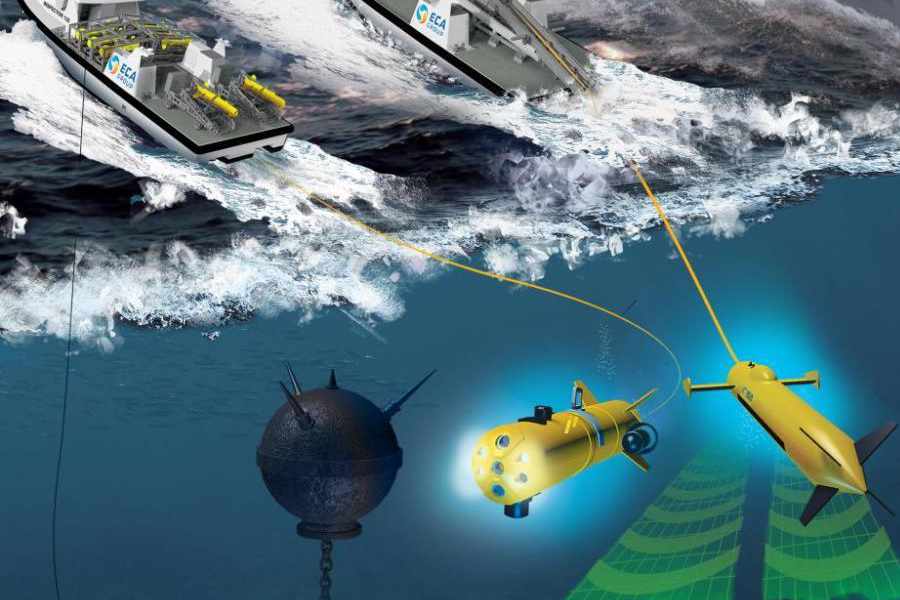 Press Release, 29 June 2020: On May 23, a new contractual milestone was crossed by the Belgium Naval & Robotics teams. Exactly one year after the notification of the contract in 2019, this programme, which provides for the supply of twelve mine hunters equipped with drone systems (Toolbox) to the Belgian and Dutch navies, reaches a new milestone.

In the midst of the COVID-19 health crisis, the Belgium Naval & Robotics teams have reached a new milestone within the framework of the mine war programme, which provides for the delivery of 12 mine hunters equipped with their Toolbox. The milestone reached on May 23, 2020, ‘Systems Functional Review’, validates the functional and architectural studies of all the systems of mine action ships developed by Naval Group such as computer networks, electrical installations, propulsion or combat systems, as well as those of all drones developed by ECA Group, key elements of the ships. This review also focused on the systems of systems that provide mission management, communications and cybersecurity, as well as on the integration of drone systems on the ship.

“This milestone represents an important step because it demonstrates that the systems’ architecture of the armed ship meets the functional requirements of our Belgian and Dutch customers,” said Eric Perrot, programme director for Naval Group.

The twelve ships will be equipped with a total of a hundred drones managed in a pool called Toolbox, shared by the two navies and supplied by ECA Group. The configuration of the Toolbox, used on board each ship or deployed from the shore, will vary depending on the typology of the missions. It will consist of surface drones USV INSPECTOR125, underwater drones AUV A18M and towed sonars T18 for mine detection and the MIDS system (Mine Identification and Disposal System) for mine identification and neutralization.

“The requirement and the rigour of the client when passing these milestones are essential; we can thus approach the following phases of the programme under sound conditions. Furthermore, the mobilisation of our teams during the confinement period made it possible to ensure an efficient telework organisation and thus meet the deadlines,” confirms Jean-Louis Sambarino, programme director of ECA Group.

In charge of the preliminary design of the ships, Naval Group works in close collaboration with Kership who will carry out the detailed design of the ships and their construction. Kership’s activities will start after crossing the Preliminary Design Review milestone, which is scheduled for December 2020.

“The COVID-19 challenge was resolutely taken up and mastered by Belgium Naval & Robotics and our binational project team. The flexibility, diligence and professionalism of both parties were the ingredients necessary for the success of this important step in the contractual deadlines. The constructive atmosphere and expertise of Belgium Naval & Robotics inspires confidence in the prospect of the next milestone this fall,” said Commander Claude Bultot, programme director for the Belgian and Dutch navies.

The contract for twelve mine hunters for the Belgian and Dutch navies will span over ten years. After a design period of three years, Belgium Naval & Robotics will move on to the production phase of these ships and drone systems, with an initial delivery scheduled for 2024. Six ships will be delivered to the Belgian navy and six to the Dutch navy; they will be equipped with a complete drones system (Toolbox) containing a total of more than a hundred underwater, surface and aerial drones entirely dedicated to mine hunting.