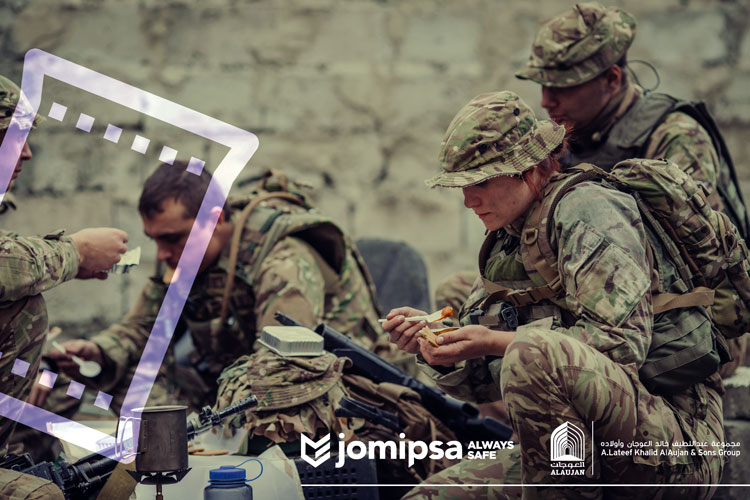 Jomipsa and Al Aujan will be showcasing the latest developments in MRE rations for the Bahraini market at the BIDEC 2019 international defence expo.

Press Release, 21 October 2019: From 28 to 30 October, the next edition of BIDEC 2019 international defence fair in Bahrain will take place, in which Jomipsa along with its distributor in Bahrain, A. Lateef Aujan, will be present. A perfect chance to strengthen the company’s brand in the country as well as showcasing all the sectors in which it operates through its various MRE ration packs. Military, emergencies, fire-fighters, security personnel etc…

As well as having the chance to meet representatives and delegations from various countries within the Middle East in order to increase the company’s presence in this geographical area, Jomipsa will be present at BIDEC 2019 showcasing the 24h ration pack, which it has been supplying the Bahrain Armed Forces since 2018. A personalised 24-hour halal ration pack which includes the country’s flag and language, with the aim of having an operational alternative during combat manoeuvres and during action, where these types of solutions are both practical and cover the needs of the different institutions.

The Al Aujan Group was founded in Bahrain in 1972 as one of the country’s most powerful group of private companies. It began working in footwear, then added the sale of basic products and the distribution of food and personal care products. Zapatos Latif, Al Aujan Food Int’l and Al Aujan Real Estate are amongst its main brands.

Jomipsa is a Spanish company based in Alicante, specialising in research, development and manufacturing of halal ration packs, combat ration packs and hygiene kits, for more than 35 years. Jomipsa is considered as a benchmark in the food rations and humanitarian aid kits sector. It boasts the following certifications (FSSC ISO 22000, ISO 9001, ISO 14001), which make this a company focused on complying with the highest quality standards. Its impeccable trajectory has allowed it to work alongside armies throughout half the world and with the main international humanitarian aid agencies.

Jomipsa and Al Aujan will celebrate their first year as partners at BIDEC 2019. An exceptional chance to showcase the great potential of both companies, which will allow it to strengthen institutional relations with those institutions that require MRE food ration pack services for their operatives, as well as allowing them to develop new projects thanks to our combined knowhow.