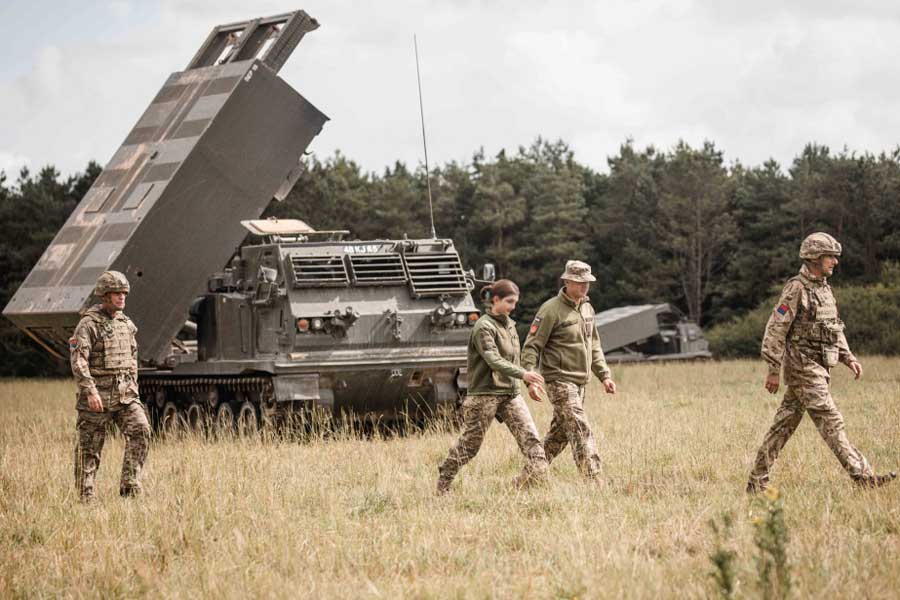 Ukrainian troops training in the UK to use MLRS [Crown Copyright]

UK to give more MLRS (multiple launch rocket systems) and guided missiles to Ukraine after the successful use of earlier gifted UK systems.

Britain will also give a significant number of precision guided M31A1 missiles which can strike targets up to 80km away, enabling Ukraine to continue to defend itself against Russian heavy artillery. The decision comes following the successful use of multiple-launch rocket systems by the Armed Forces of Ukraine, gifted by the UK earlier this year.

Defence Secretary Ben Wallace MP said: “This latest tranche of military support will enable the Armed Forces of Ukraine to continue to defend against Russian aggression and the indiscriminate use of long-range artillery.

“Our continued support sends a very clear message, Britain and the international community remain opposed to this illegal war and will stand shoulder-to-shoulder, providing defensive military aid to Ukraine to help them defend against Putin’s invasion.”

Ukrainian troops have been trained in the UK on how to use the launchers so that they can maximise the effectiveness of the systems. This is in addition to the UK’s commitment to train up to 10,000 Ukrainian soldiers in infantry battlefield skills over the coming months. Canada, Denmark, Sweden, Finland and the Netherlands have all announced they will be supporting the programme.

Building on this effort, the Defence Secretary will co-host the Copenhagen Conference for Northern European Defence Allies of Ukraine on Thursday 11 August, to discuss further, long-term support for Ukraine on training, equipment, and funding.

Recognising the relentless courage and determination of the Ukrainian people, the UK and its allies will begin to establish a plan of action to support Ukraine into 2023 and beyond for as long as necessary, as they continue to fight for their freedom and sovereignty.