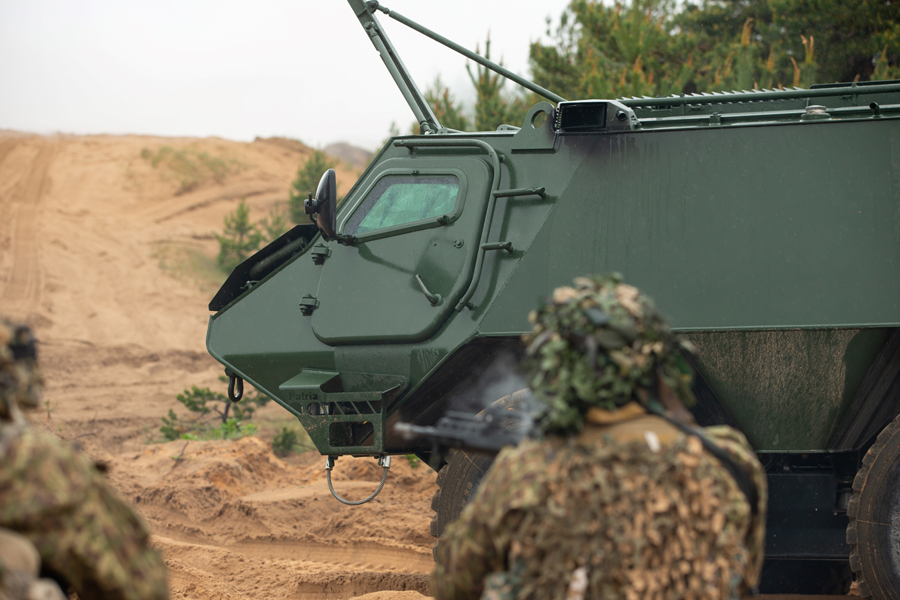 Patria’s new 6×6 armoured troop-carrying vehicles were deployed with the Latvian infantry on the multinational Exercise ARROW 22 in Finland.

Press Release, Helsinki, 09 June 2022: Patria’s new 6×6 armoured troop-carrying vehicles were deployed with the Latvian infantry on the multinational Exercise ARROW 22 , hosted by Finland, during the first two weeks of May. The Latvian vehicles, just 6 months old, were ‘fighting’ alongside allied Finnish, American, British, and Estonian troops in the Niinisalo training area.

With the Russia-Ukraine war still at boiling point, Finland and Sweden declaring an application for NATO, and Russia threatening everyone in the region, an exercise like this took on a more serious and urgent character than normal. However, not only exercises create security for the countries involved. Political and defence relationships and agreements, and especially joint defence procurements bring allies closer together in common defence activities. What Finland and Patria are doing with Latvia on the 6×6 (CAVS) programme is developing this relationship by linking two countries in a joint operational and logistic partnership.

Exercise ARROW 22 was the coming of age for the Finnish and Latvian collaborative vehicle programme showcasing the Patria 6×6 for the first time in the region. The Latvian experience of the 6×6 so far has been extremely positive. The Latvian troops exercising in Finland were quick to praise the vehicle, not the least, how easy it was to manoeuvre with its all-wheel drive and front two axle steering. The soldiers were also unanimous in their praise about the large internal space designed for continuous operations carrying a full 10-man section and equipment. The Latvians have either not reported a single failure or warranty issue since the first vehicles were delivered six months ago despite their heavy use during training and exercises. This was a clear reflection of the vehicles’ strong heritage and lessons gained by Patria from the combat proven Patria AMV 8×8 already widely used in service.

More Operational Mobility: The Latvian Armed Forces have long needed an armoured troop-carrying vehicle to improve operational mobility for both the army and national guard units. In response to the international situation the Latvian government have increased the defence budget. This allows the Latvian armed forces to purchase over two hundred 6×6 vehicles from Patria.

Finland and Latvia both recognised they needed a similar vehicle for their armed forces. The Defence Ministers signed a joint agreement in January 2020 to create a high mobility 6×6 type of Common Armoured Vehicle System which could be also adapted for other purposes. After a comprehensive evaluation period Patria Finland was chosen to be the producer. Latvia also demanded security of supply from the procurement in both peace and war. This required a new higher level of agreement between the two countries and provided serious tasks for Patria over and above delivering the vehicle. The project so far has been innovative for both Patria and Latvia in several ways. First agreeing joint R&D programme with common requirements of a new vehicle with Patria and creating future logistic processes, second gaining the deep Patria expertise in R&D and military product development, and third by Patria creating a system with Latvian companies to deliver the vehicles with long term guaranteed support.

Common Vehicle System Creates Synergies: The R&D programme has brought good results for both parties. Using the Patria commercial vehicle platform as a start point, Patria and the Latvian Armed Forces agreed what they wanted the common vehicle system to be. This agreement was vital for the Patria engineers so they could design the common vehicle frame and identify the parts and spares needed, as well as developing common support elements. This all aimed to simplify and reduce the costs of production. Once the basic model was agreed each country had to identify what they wanted to be built around the common frame. Then the vehicles had to be tested and qualified to ensure they were fit for purpose.

The future research steps for Patria with the common vehicle are to add capabilities to operate amid varying threats common on international operations, as well as development of medical evacuation and command post variants. Sweden is in the final agreement stages for joining the project, enabling them to utilise already developed versions as well as to bring something new. They will also join the R&D programme. All variants will be available for other allied countries to buy which also reduces the shared research costs.

This project is political at heart and established by participating nations with Patria just the commercial face. The government level Technical Agreement aims at harmonising both defence capabilities and procurement policies to bring added security benefits from close defence cooperation whilst the vehicles are in service. This could be more than 40 years. Other countries joining the project will be participating on the same agreements. This kind of collaborative approach on defence development, procurements and operations stems right from the core of EU Defence and Security policy.

Economic Benefits And Industrial Capabilities: Coincidentally for Latvia the project brings new economic benefits and industrial capabilities. The security of supply organised by Patria is creating new defence industry cooperation inside Latvia enabling working on wider markets. Now much of the metal work for the structure of the vehicle, and the final assembly of the frame including all locally manufactured items are being conducted by Latvian firms. This will benefit Finland and Patria by reduced costs, enhanced security of supply and shared business interests.

Finland today is a key NATO partner, hopefully soon to be member with Sweden. Through the work of Patria, Finland, is binding herself to allied Latvia with common strengths and vulnerabilities in a new and remarkable way. When Finland and Sweden join NATO the Patria 6×6 (CAVS) vehicle project will provide binding political and operational cooperation right across the Baltic Sea region and hopefully further into Europe.