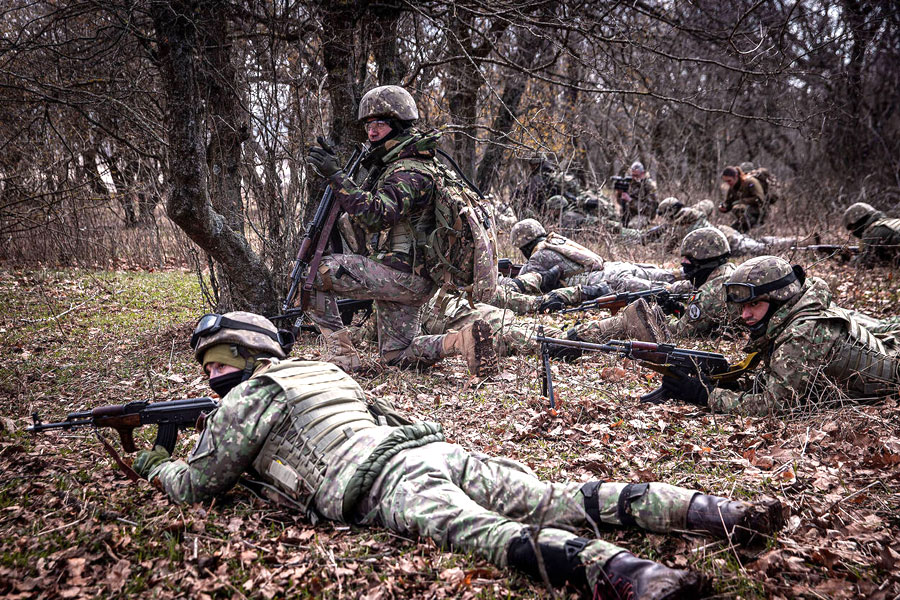 Dutch soldiers of the Airmobile Brigade train at the border between Ukraine and Romania together with the American 1st Air Cavalry Division and Romanian counterparts, March 2022 [NL MinDef: Sgt. Jasper Verolme]

The Netherlands will contribute approximately 200 military personnel to a NATO forward presence battle group in Romania.

News Release, The Hague, 20 April 2022: The Netherlands will contribute approximately 200 military personnel to a NATO battle group in Romania. The expectation is that the Dutch unit will be stationed at a military base in Cincu, which is in the middle of the country. In principle, the unit will be part of NATO’s forward presence for a period of 12 months.

This company-size airmobile unit will be part of a French-led battle group of approximately 900 military personnel. A separate engineering team of around 85 military personnel may travel to Romania as early as next month. Although the engineers are not part of the battle group, they will help in preparing the location, a process that is expected to take around six months depending on French planning and the possible need for engineering capacity.

NATO reinforcement of eastern flank: The unit’s presence in Romania and the exercises that the troops will conduct there will contribute to NATO’s deterrence. The troops will be able to move quickly to protect the NATO treaty area if necessary. The deployment will also reassure NATO Allies in the region. Because of the Russian invasion of Ukraine and its consequences for the security situation in Europe, NATO is reviewing its collective defence function and reinforcing its eastern flank. At the beginning of April, the Allies therefore agreed to the stationing of battle groups in Bulgaria, Hungary, Romania and Slovakia under the command of the Supreme Allied Commander Europe (SACEUR).

Under SACEUR command: The battle group in Romania will also be under the command of the SACEUR. In terms of control, the situation will be similar to that of the enhanced Forward Presence (eFP) in Lithuania. This means that SACEUR will decide on the movement and deployment of the battle group’s units without permission being required from the contributing countries. In the performance of duties, SACEUR will act within the frameworks set by the NATO Allies.

Furthermore, the Royal Netherlands Army recently deployed Patriot air defence systems to Slovakia. The army has been participating in NATO’s eFP in Lithuania for over five years and will also be part of the eFP in Romania from this summer.