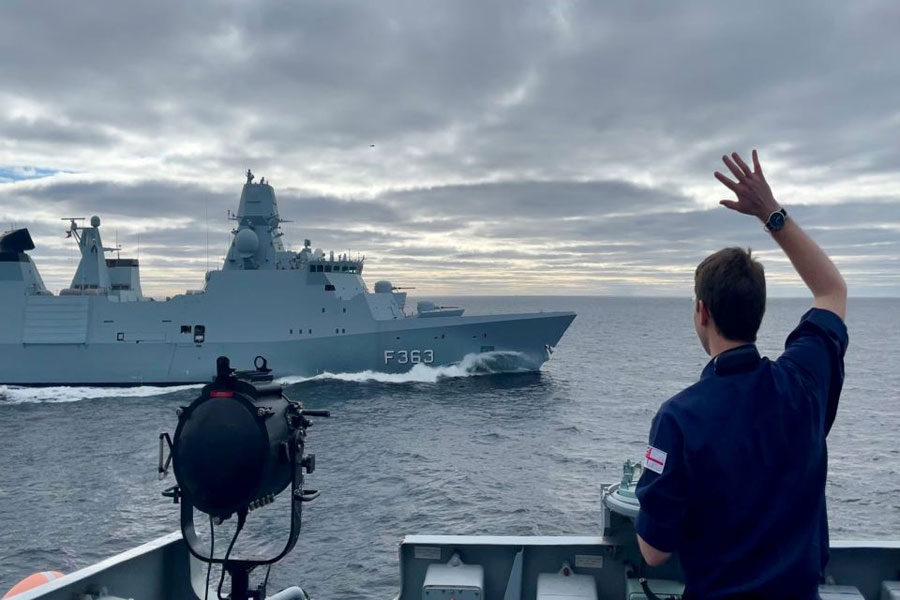 HMS Northumberland and sister ship HMS Richmond joined Danish frigate HDMS Niels Juel and warships from Sweden, Estonia, Latvia and Lithuania for maritime patrols in the strategically important region. JEF naval vessels escorted Danish and British supply ships as they delivered military vehicles and equipment to resupply the UK-led NATO Battlegroup in Estonia, where troops from the UK and Denmark are serving side by side. The UK recently doubled the number of troops in Estonia as part of wider NATO efforts to strengthen its eastern defences following Russia’s illegal and unprovoked invasion of Ukraine.

As well as patrolling and delivering the vital supplies, the warships and aircraft conducted a series of joint exercises to demonstrate and hone their seamless interoperability. Danish F-16s and Swedish Gripen fighter jets rehearsed air defence tactics with the vessels, while one of the UK’s new RAF Poseidon P8A submarine hunter aircraft practised working with the ships to spot enemy vessels.

Major General Jim Morris DSO, the Commander of the UK Standing Joint Force HQ (SJFHQ) which leads the JEF, said: “Activities such as these in the Baltic Sea are routine business for us and our JEF partners, in one of our principal areas of geographical interest.

“Given the current level of aggression being displayed by Russia, there has never been a more important time to ensure that freedom of navigation is maintained in the Baltic Sea.”

This region is of vital strategic importance as we seek to ensure stability and freedom of navigation in the Baltic Sea. The JEF is a UK-led force, comprising 10 nations working together to deliver forces at high readiness, across a range of roles, complementing NATO and European security. The coalition focuses on security in the Baltic Sea region, the High North and the North Atlantic, where its members are located.

In March, the Prime Minister hosted JEF leaders in London for the first ever leader-level summit. At the leaders’ summit, JEF members committed to supporting Ukraine with defensive military aid and ensuring that JEF continued to play a credible role in contributing to defence and deterrence in the region. The meeting followed meetings of Defence Ministers and Chiefs of Defence in February. The coalition is complementary to NATO’s wider strategic posture which originated from the 2014 NATO summit in Wales. Led by the UK as framework nation, it is agile and responsive, acting flexibly either in smaller groupings or as ten nations communicating with one voice.

Rear Admiral Torben Mikkelson, Chief of the Royal Danish Navy, said: “The current situation calls for increased focus on security of the Baltic Sea and stability of our region. The Danish Navy will, with our partners in the JEF alliance, do our utmost to contribute to that.”

A busy schedule of activity over the coming months and years will see the JEF operating across its core areas of the North Atlantic, High North and Baltic Sea Region, with a particular focus on the upcoming Command Post Exercise JOINT PROTECTOR later in 2022, followed by the Live Exercise JEF WARRIOR in 2023.