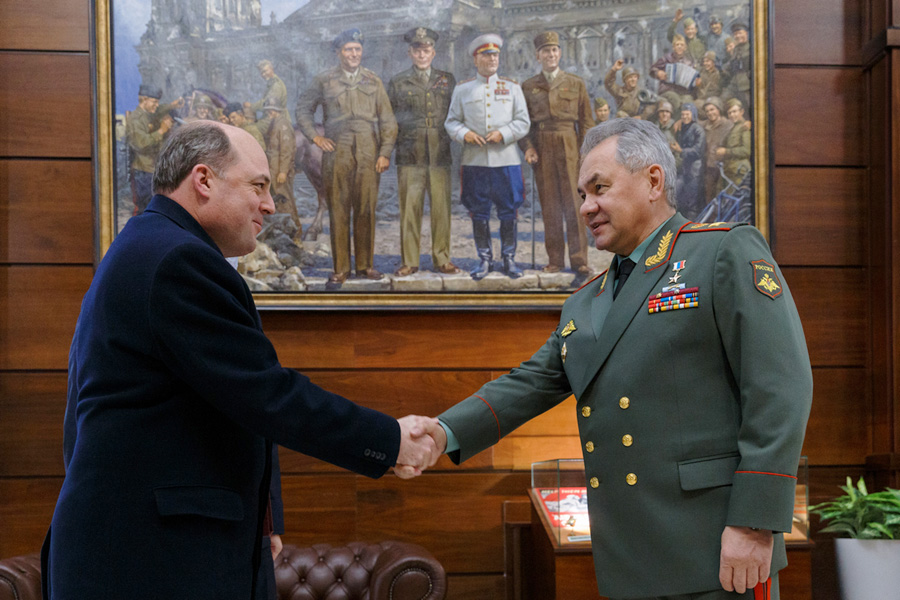 Talks were held in the Russian Ministry of Defence in Moscow. This was the first time that the two nations’ defence ministers have met since General Shoigu visited London in 2013, and the first time a British Defence Secretary has visited Moscow since 2001.

Chief of the Defence Staff Admiral Sir Tony Radakin also met with his counterpart, Chief of the General Staff of the Armed Forces of the Russian Federation, General of the Army Valery Gerasimov (Вале́рий Гера́симов).

Press Release, Moscow, 11 February 2022: The Minister of Defence of the Russian Federation, General of the Army Sergei Shoigu, held talks in Moscow with his British counterpart Ben Wallace. During the meeting, the head of the Russian military department said that the situation on the European continent is becoming increasingly tense, and it was not Russia’s fault.

“I welcome you to Moscow, to the Ministry of Defence. The military-political situation in Europe is becoming more and more tense. And far from our fault. We don’t quite and always understand the reasons for this tension. But, nevertheless, we see that it is growing,” Sergei Shoigu said.

The Russian Defence Minister expressed hope that during the meeting it would be possible to discuss “topical issues of reducing this tension, as well as our proposals to the United States of America and NATO on ensuring security in Europe, which we sent in December and received a response in January. Now it’s all considered. I think that our response will also follow in the near future.”

The head of the Russian military department noted that before the meeting he carefully read the speeches of the British Defence Minister and his colleagues. “Unfortunately, we still see in every speech, through the line, threats of sanctions. I would not like our conversation today to be a continuation of this kind of interview,” said General of the Army Sergei Shoigu.

During the talks with his British counterpart, the Russian Defence Minister suggested that Western countries contribute to reducing tensions in Europe and stop supplying weapons to Ukraine. “For our part, we would also like to offer to contribute to reducing this tension and stopping the stuffing of weapons in Ukraine. It is coming from all sides, it is being done publicly. This is done in a demonstrative manner. It’s not quite clear what for. I would also like to understand why Britain, the kingdom, is sending its Special Forces to Ukraine, and for how long will it be there?”, the head of the Russian military department added.

Sergei Shoigu also expressed concern about the possible use by terrorists of weapons left by the troops of the Western coalition in Afghanistan. “I would also like to recall the sad experience of pumping weapons of individual states. Let me remind you that almost 80 billion (US dollars) worth of weapons were left in Afghanistan not so long ago. If we talk about Javelins, anti-tank missiles, then more than a hundred of them were left in Afghanistan. If we talk about MANPADS to combat aviation means, more than 150 of them were left,” the Russian Defence Minister said.

According to the head of the Russian military department, “all this, of course, poses a threat today, given that only recently the number of ISIS fighters in Afghanistan has doubled. And it is difficult for us to understand where and into which hands this weapon will fall. We would not like this topic to fade into the background. As is the topic of refugees from Afghanistan. As is the topic of drug trafficking from Afghanistan.”

According to Sergei Shoigu, “today we are seeing more and more concentration of attention, an transcendent concentration of attention on issues that, in our opinion, could be resolved quite calmly in a dialogue between all countries, without threats of imposing certain sanctions. Already, in my opinion, there are no words left in either English dictionaries or Russian that could denote these sanctions. And ‘catastrophic’, and ‘shocking’, and ‘destroying’. There are many different words,” stated the Minister of Defence of the Russian Federation.

Sergei Shoigu also reminded Ben Wallace that today’s meeting of the heads of the military departments of Russia and the UK is the first in recent years. “Unfortunately, the level of our cooperation is close to zero and is about to cross the zero meridian and go into the negative, which I really would not like. Therefore, I really hope for the opportunity to discuss the most pressing issues with you. Without any escalation and raising the temperature even higher in relations between Russia and the countries of the NATO bloc. And especially with Great Britain, taking into account the historical experience of our cooperation and combat cooperation,” the Russian Defence Minister said.

In turn, the head of the British military department, Ben Wallace, expressed readiness to discuss topical issues of international security with the Russian Defence Minister in order to reduce overall tension. “We, as defence ministers, must be determined to fight the insecurity in our world. I hope that your speech today starts a relationship that was practically zero,” he said after Sergei Shoigu’s opening speech. “We can resolve several issues that you raised in your speech.”

The British minister said that during the meeting in Moscow he was ready to consider the issues raised by the Russian side in the draft documents in December last year. “We can try to move forward, resolve our issues through diplomacy and other measures, as well as through general confidence-building measures,” Ben Wallace added.

He thanked for the willingness to meet at such an unstable time, “which does not benefit our peoples and does not eliminate such threats and challenges as terrorism.”

The British Defence Minister expressed hope to discuss issues of Ukraine, Afghanistan, as well as the fight against terrorism and other issues of mutual interest during the meeting. “I hope that we will be able to influence the climate, the economy and migration, which could reduce the overall tension,” Ben Wallace said.

The British minister also said that he laid a wreath from the British government at the Grave of the Unknown Soldier in Moscow, stressing that he remembers the sacrifices that the Russian people suffered during the Second World War and other previous wars. “I laid a wreath as a former soldier. I myself have seen many soldiers die next to me, and I would not want any other soldiers to die in the future, both in Europe and in other regions of the world,” Ben Wallace added.