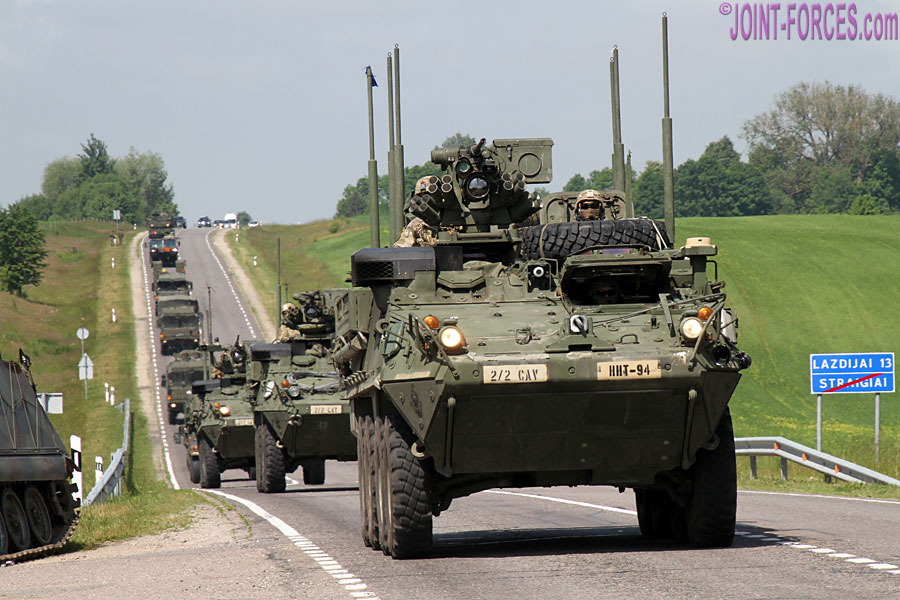 Library image of the Germany-based Stryker Brigade Combat Team on a road move with Allies through the Suwalki Gap in Lithuania, June 2017 [© Bob Morrison]

Briefing Transcript, The Pentagon, 02 February 2022: Good morning, everybody. Just some things at the top.

I think as you heard Secretary Austin address just last Friday with the chairman here in the Briefing Room, we remain focused on the evolving situation in Europe, and Russia’s actions on the Ukrainian border and in Belarus. As the secretary said, the United States stands shoulder to shoulder with our NATO allies. The current situation demands that we reinforce the deterrent and defensive posture on NATO’s eastern flank.

I want to be very clear about something, these are not permanent moves. They are moves designed to respond to the current security environment. Moreover, these forces are not going to fight in Ukraine, they are going to ensure the robust defence of our NATO allies.

Now, let me lay this out for you in a series of three steps. First, 1,000 soldiers that are currently based in Germany will reposition to Romania in the coming days. Now, this is a Stryker squadron, a mounted cavalry unit that’s designed to deploy in short order and to move quickly once in place. They will augment the some 900 US forces that are currently in Romania.

Now, this force is designed to deter aggression and enhance our defensive capabilities in front-line allied states. And we expect them, as I said, to move in coming days. Secretary Austin discussed this repositioning to Romania just last week in his conversation with the Romanian minister of defence. And again, I want to stress that this move is coming at the express invitation of the Romanian government.

Additionally, we welcome French President Macron’s announcement that France intends to deploy forces to Romania under NATO command, which Secretary Austin discussed with the French defence minister, Florence Parly, just last week. The United States will continue to consult and coordinate with France and all our allies to ensure that we complement each other in our respective deployments. And of course, we’re going to continue to work through NATO to make appropriate defensive and non-escalatory force posture alignments.

Second, we are moving an additional force of about approximately 2,000 troops from the United States to Europe in the next few days. The 82nd Airborne Division is deploying components of an infantry brigade combat team and key enablers to Poland, and the 18th Airborne Corps is moving a joint task force-capable headquarters to Germany. Now, both of them, as you know, are based in Fort Bragg, North Carolina. Collectively, this force is trained and equipped for a variety of missions to deter aggression and to reassure and to defend our allies. Not surprisingly, we work very closely with our Polish and German allies to set the stage for these movements, and we absolutely appreciate their support. Again, these are not permanent moves. They respond to current conditions. We will adjust our posture as those conditions evolve.

Third, and finally, all of these forces are separate and in addition to the 8,500 personnel in the United States on heightened alert posture that I announced last week. Those 8,500 are not currently being deployed, but remain ready to move if called for the NATO response force or as needed for other contingencies as directed by the secretary or by President Biden. We continue to review our force posture and the situation in Europe, and we will make adjustments as the situation warrants.

I also want to take this opportunity to correct some misconceptions around last week’s announcement. NATO as an organisation does not have veto power over US troop deployments, and media reports to the contrary represent a mischaracterisation of that. Nothing precludes the United States from making its own decisions on force — force movements, including those forces that are being placed on heightened readiness.

That said, any movement of US forces involves consultation with the host nation, as we have done with Romania and Poland and Germany prior to today’s announcements, and we’re mindful of the competing needs of operational security and our obligation to be transparent, and we’ll provide you additional information on these and other movements as available and as appropriate. As we have long said, we are continuously reviewing our posture, so there may soon be additional posture decisions to announce, including movements that are part of ongoing military exercises. This is not the sum total of the deterrence actions we will take or those to reassure our allies. I think it won’t surprise you that we take a theatre-wide approach to deterrence and defence, and we welcome the additional announcements by Spain, Denmark, the U.K. and the Netherlands of their consideration to deploy additional forces to reinforce NATO’s eastern flank. The United States has robust capabilities distributed across Europe, including in the Baltic region, and we will continue to assess needs in that area in cooperation with the relevant allies and, of course, the full NATO alliance. We stand united. We have said that repeatedly. We say it again today. These movements are unmistakable signals to the world that we stand ready to reassure our NATO allies and deter and — and — and defend against any aggression.

Now, as the secretary said Friday, we do not know if Russia has made a final decision to further invade Ukraine, but it clearly has that capability. The Department of Defense will continue to support diplomatic efforts led by the White House and the State Department to press for resolution. We do not believe conflict is inevitable. The United States, in lockstep with our allies and partners, has offered Russia a path to de-escalate, but we will take all prudent measures to assure our own security and that of our allies.

Now finally, just one note: I note that in the past few hours, a proposal made by the United States leaked to a European news outlet. We did not make this document public, but now that it is, it confirms to the entire world what we have always been saying: There is no daylight between our public statements and our private discussions. NATO and its partners are unified in their resolve and open to constructive and serious diplomacy. The United States has gone the extra mile to find a diplomatic solution, and if Russia actually wants to negotiate a solution, as it claims it does, this document certainly makes clear that there is a path forward to do so.

Featured, Germany, Poland, Romania, The Pentagon, Ukraine, US Army
You may also like