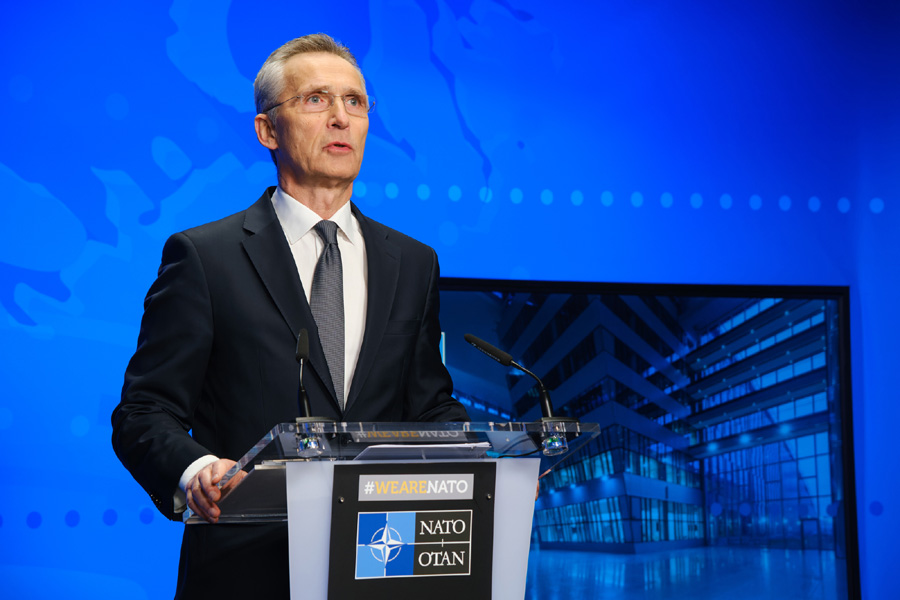 This evening, Wednesday 26th January, a press conference on the Ukraine situation was held by NATO Secretary General Jens Stoltenberg.

We face a critical moment for Euro-Atlantic security.

Russia’s military build-up in and around Ukraine continues, with more than 100,000 troops in position, and more on the way, including significant deployments in Belarus.

We call on Russia once again to immediately de-escalate the situation.

NATO firmly believes that tensions and disagreements must be resolved through dialogue and diplomacy.

Not through force or the threat of force.

So today, NATO has conveyed our written proposals to Russia.

We have done so in parallel with the United States.

Let me outline the three main areas where we see room for progress.

Russia has cut diplomatic ties with NATO, which makes our dialogue more difficult.

So we should re-establish our respective offices in Moscow and in Brussels.

We should also make full use of our existing military-to-military channels of communications, to promote transparency and reduce risks, and look also into setting up a civilian hotline for emergency use.

Second, European security, including the situation in and around Ukraine.

We are prepared to listen to Russia’s concerns, and engage in a real conversation on how to uphold and strengthen the fundamental principles of European security that we have all signed up to, starting with the Helsinki Final Act.

This includes the right of each nation to choose its own security arrangements.

Russia should refrain from coercive force posturing, aggressive rhetoric, and malign activities directed against Allies and other nations.

Russia should also withdraw its forces from Ukraine, Georgia, and Moldova, where they are deployed without these countries’ consent, and all parties should engage constructively in efforts to settle conflicts, including in the Normandy format.

History has shown that engagement on these issues can provide real security for everyone.

So we need practical measures that will make a real difference.

As a first step, we are proposing mutual briefings on exercises and nuclear policies in the NATO-Russia Council.

We should also modernise the Vienna Document on military transparency, and work to reduce space and cyber threats.

We should consult on ways to prevent incidents in the air and at sea, and recommit to full compliance with international commitments on chemical and biological weapons.

Finally, we need to have a serious conversation on arms control.

Including nuclear weapons and ground-based intermediate and shorter range missiles.

These areas represent an agenda for meaningful dialogue, and I have invited Allies and Russia to a series of meetings to address all of these issues in greater detail in the NATO-Russia Council.

Allies are ready to meet as soon as possible.

In all of our efforts, we continue to coordinate closely with Ukraine, as well as with other NATO partners, including Finland, Sweden, Georgia, and of course, the European Union.

NATO is a defensive Alliance, and we do not seek confrontation.

But we cannot and will not compromise on the principles on which the security of our Alliance and security in Europe and North America rest.

We remain fully committed to our founding treaty, and our collective defence pledge enshrined in Article 5.

We will take all necessary measures to defend and protect all Allies.

And with that I am ready to take your questions.