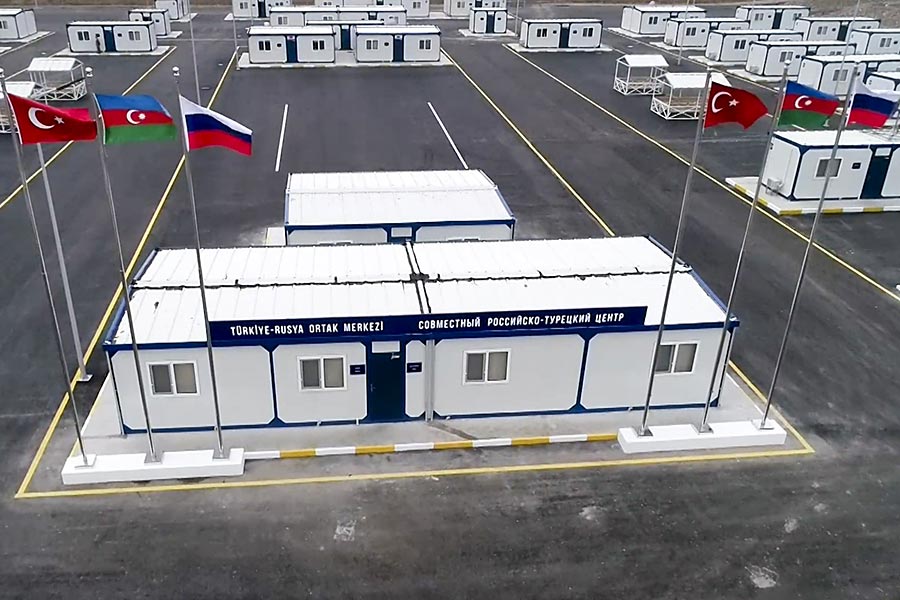 Russian and Turkish military personnel are working together in a Joint Centre to monitor the ceasefire situation in Nagorno-Karabakh.

Russian Federation Press Release, 06 February 2021: The personnel of the Joint Russian-Turkish Centre continues to fulfil the tasks of monitoring compliance with the ceasefire and military operations in the zone of the Nagorno-Karabakh conflict.

“We are in the joint Russian-Turkish monitoring centre, where Russian and Turkish servicemen carry out a common task of monitoring the ceasefire and military operations in Nagorno-Karabakh. Monitoring of the situation is carried out around the clock with the help of unmanned aerial vehicles, in particular, the Forpost and Orlan-10 UAV systems. No ceasefire violations have been recorded,” said Colonel Mikhail Zavalkin, a Russian representative of the Joint Centre.

“The duty shift in the Russian part of the centre consists of officers from the operational department, liaison officers, translators and operators of unmanned aerial vehicles,” he added.

The servicemen of the Joint Centre continuously receive images from unmanned aerial vehicles to the control centre, where all movements of military equipment, personnel are analysed, and all facts of crossing the line of contact of the parties are recorded.

For reference: The joint Russian-Turkish centre to control the ceasefire and all hostilities in the zone of the Nagorno-Karabakh conflict will be deployed on the territory of the Republic of Azerbaijan in accordance with the Memorandum signed by the heads of the defence departments of the Russian Federation and the Republic of Turkey on November 11, 2020. As part of the Joint Centre, on a parity basis from the armed forces of Russia and Turkey, national contingents are represented under the leadership of their commanders (up to 60 servicemen from each side).