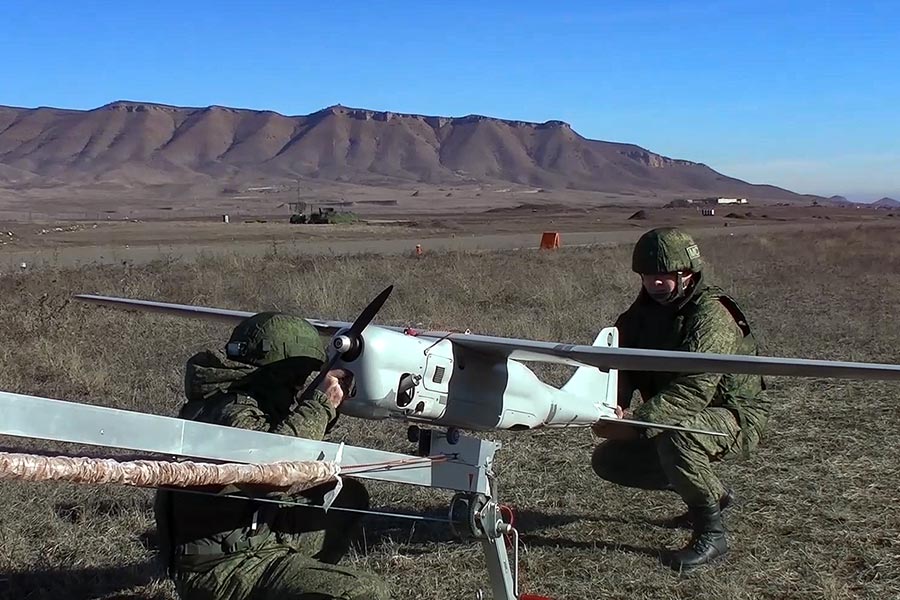 Russian UAV crews of the Joint Russian-Turkish Centre are exercising control over the observance of the ceasefire regime in Nagorno-Karabakh.

News Release, 04 February 2021: The personnel of the Joint Russian-Turkish Centre continues to fulfil the tasks of monitoring compliance with the ceasefire and military operations in the zone of the Nagorno-Karabakh conflict.

Russian military personnel are monitoring the ceasefire using unmanned aerial vehicles Forpost and Orlan 10. The servicemen of the Joint Centre continuously receive images from unmanned aerial vehicles to the control centre, where all movements of military equipment, personnel are analysed, and all facts of crossing the line of contact of the parties are recorded. The duty shifts of the Joint Centre collect, summarise and check information on violations of the agreements reached, consider any complaints on issues or problems related to the failure of the parties to the Nagorno-Karabakh conflict to comply with the agreements reached.

The joint Russian-Turkish Centre to control the ceasefire and all hostilities in the zone of the Nagorno-Karabakh conflict will be deployed on the territory of the Republic of Azerbaijan in accordance with the Memorandum signed by the heads of the defence departments of the Russian Federation and the Republic of Turkey on November 11, 2020.

Editor’s Footnote: The Joint Russian-Turkish Centre for monitoring the Nagorno-Karabakh Ceasefire was formally opened in the Agdam region of Azerbaijan, around 25 kilometres roughly north-east of Stepanakert / Khankendi, on 30th January. Turkey and Russia are reportedly each providing up to 60 military personnel to operate the facility. Only Russian military personnel appear in these images.