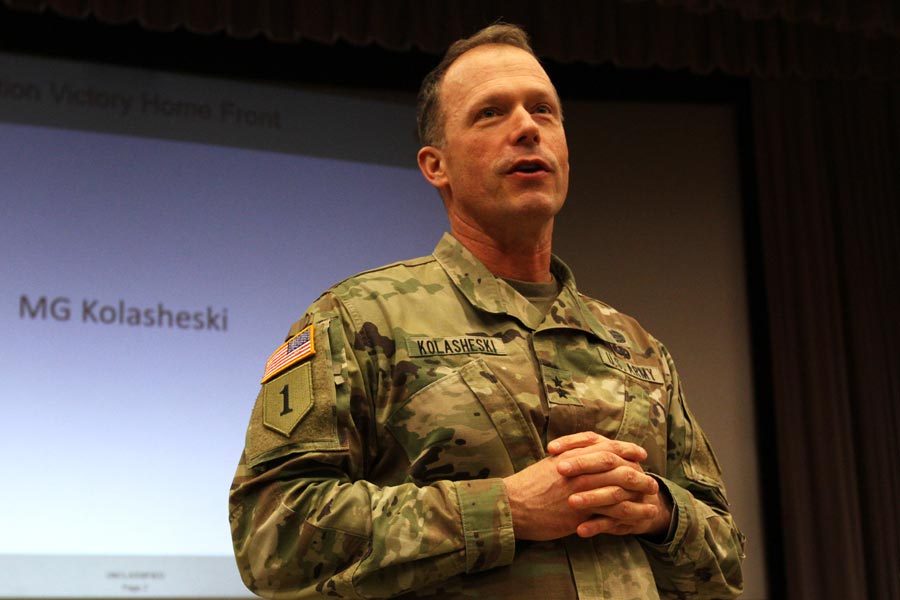 The US Army Chief of Staff has announced the Forward Headquarters of V Corps, reactivated at Fort Knox in February, will be located in Poland.

Press Release, 04 August 2020: Today the US Army Chief of Staff announced the V Corps Headquarters (Forward) would be located in Poland.

Gen. James McConville was on hand to promote Maj. Gen. John Kolasheski, V Corps commanding general, to the rank of lieutenant general and officially unfurl the V Corps flag in Poland. The forward command post will be manned with approximately 200 personnel on a rotational basis. US Army Europe expects the first rotation of personnel in Fiscal Year 2021.

“The activation of an additional Corps headquarters provides the needed level of command and control focused on synchronising US Army, allied, and partner nation tactical formations operating in Europe. It will enhance US Army Europe and US European Command as they work alongside allies and partners to promote regional stability and security,” said McConville.

In February, the US Army announced the reactivation of V Corps at Fort Knox, Kentucky, and identified Europe as the location for a forward command post. The location of the V Corps Headquarters (Forward) was brought to fruition by the Enhanced Defense Cooperation Agreement, announced July 31.

The primary mission of the new forward headquarters will be to conduct operational planning, mission command and oversight of the rotational forces in Europe. It will also provide additional capability to support allies and partners in the region. The V Corps Headquarters (Forward) is expected to participate in DEFENDER-Europe 21.

The V Corps’ history dates back to 1918, when the unit was activated during World War I. Later, it took part in the World War II D-Day invasion and liberation of Europe.