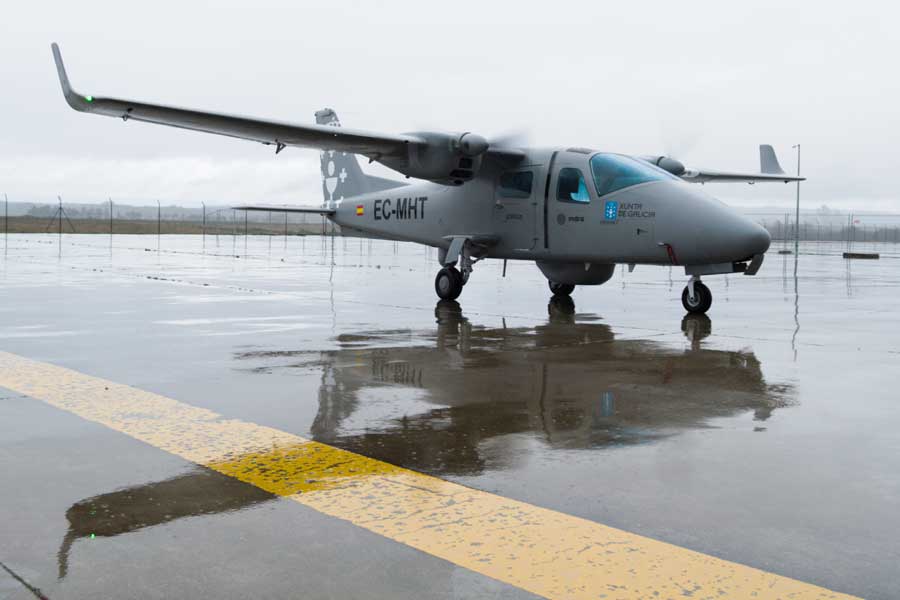 Indra Targus OPV reaches a key milestone of the Civil UAVs Initiative promoted by the Government of Galicia (Spain) to create an aerospace pole in the area.

Press Release, Madrid, 14 July 2020: Indra has successfully completed the first test flights with its Optionally Piloted Vehicle (OPV) Targus and achieved one of the decisive milestones of the Civil UAVs Initiative, promoted by the Government of Galicia to make the region a leader in this industry.

Indra has carried out this ground-breaking experimental flights in non-segregated airspace with a drone that weighs 1.25 tons and has an 11-metre wingspan. No other newly-developed UAV has been granted permission to carry out such flights before. This a landmark for Spanish aviation and a step forward for development in this sector.

The first flight took place on June 24 and was the start of a series of tests that have been conducted over the last for two weeks. All those flights comply with the Approval of Flight Conditions issued by the European Union Aviation Safety Agency (EASA) and with the Flight Approval by the Aviation Safety and Security Agency (AESA in its Spanish initials) of Spain, which authorises their testing. A special communication protocol was also established with the air traffic control of Santiago de Compostela Airport.

Aboard the Targus, the test pilot carried out the take-off manoeuvre and, once the aircraft is airborne, hands over control to the ground control centre. From that moment on, the work of Indra and Gaerum’s engineers begins: their job is to verify that all sensors and flight control systems are working properly.

With this major accomplishment, Indra has achieved within the deadline one of the most complex and demanding key milestones of the Civil UAVs Initiative, putting Galicia at the forefront in the development of drones in Europe. To have obtained the approval of Flight Conditions for an OPV from the European Aviation Safety Agency (EASA) to fly it is a success of great importance in itself since it is a process that has never been carried out before and it provides experience and a competitive advantage for the future.

Indra’s strategy to develop a drone that can carry a pilot in the cockpit to take control if necessary or hand it over to the ground station, as appropriate, has allowed this project to progress at a very fast pace. It also offers a great operational advantage for future users, who will be able to fly over urban areas or land at airports without restrictions when manned, and fly without a pilot when it arrives at the operation area. This dual use significantly enhances the commercial appeal and capabilities of Targus.

The project now enters its final stage to finish the development of the OPV this year. The Targus will then become the most advanced and efficient aircraft for conducting missions such as air-sea rescue, fishery zone surveillance, environmental protection, detection of discharges in the sea, monitoring land use and historical heritage sites and providing support to fire-fighting.

About the Civil UAV Initiative: Led by the Government of Galicia, the Civil UAV Initiative has raised €165 million distributed in four major programmes. The first focuses on the creation and improvement of aeronautical infrastructure and Rozas aerodrome to facilitate the development of the sector in the region; the second is an R&D programme with an investment of €115 million to work on the development of new products, technologies and solutions; the third pillar hinges on eleven pre-commercial tenders for solutions based on the use of UAVs aimed at improving land and rural environment management, maritime surveillance and air traffic control; and the last one is the business incubation and acceleration programme, which recently launched the Business Factory Aero, launched to attract and support projects from companies and startups from anywhere in the world.