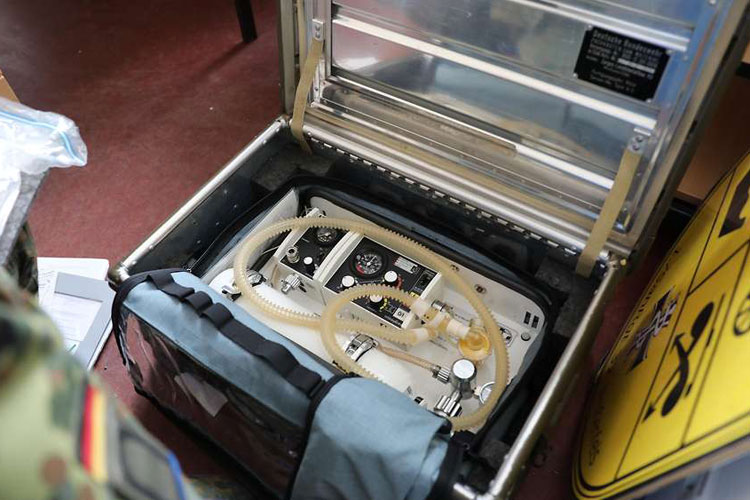 Bundeswehr Medical Service News Release, 16 April 2020: When NATO (North Atlantic Treaty Organisation) partners ask for help, the Corona crisis should not be a reason to refuse this request. Germany is setting a good example. On 15 April 2020, 60 ventilators were handed over to the NATO partner at the request of the British Ministry of Defence.

When Air Vice-Marshal Alastair N.C. Reid, the Acting Surgeon General of the British Armed Forces, asked the Bundeswehr Medical Service [Sanitätsdienst] at the end of March for support in the fight against the Corona virus, the question was not whether help could be provided, but only how quickly. At the beginning of April, the decision was then made at the Federal Ministry of Defence (BMVg – Bundes Ministerium der Verteidigung) to provide the British Armed Forces with 60 ‘Life-Base III’ ventilators. A corresponding contract of donation was drawn up by the BAAINBw [Bundesamt für Ausrüstung, Informationstechnik und Nutzung der Bundeswehr – Federal Office for Equipment, Information Technology and Utilisation of the German Armed Forces].

Close cooperation in the wake of the Corona crisis: This contract was signed on 9 April by the Armed Forces Medical Service I Leadership Unit of the Federal Ministry of Defence. Only through close cooperation between the British Ministry of Defence, the British Joint Medical Group at the Strategic Command Headquarters in Northwood, and Corona-Lagezentren im BMVg Bundesministerium [Corona Situation Centres in the Federal Ministry of Defence], Kommando Sanitätsdienst [Medical Service Command] in Koblenz, and Kommando Sanitätsdienstliche Einsatzunterstützung und beim Sanitätsregiment 1 [Medical Operations Support Command and Medical Regiment 1] in Weißenfels, was it possible to provide rapid assistance.