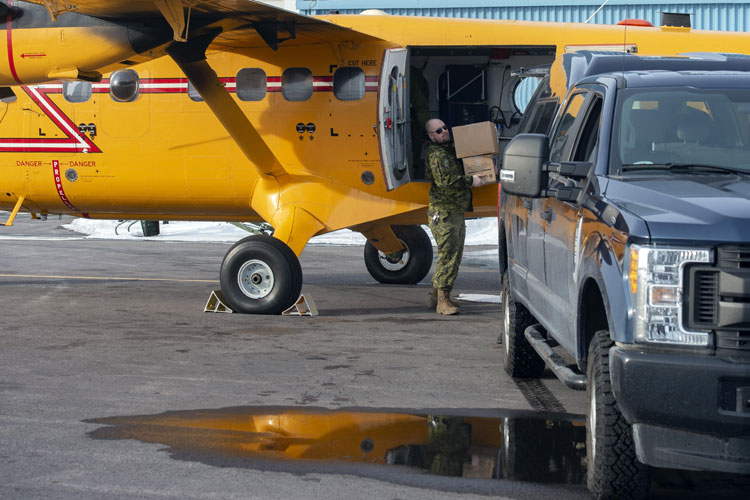 The Canadian Armed Forces, under Operations LASER and LENTUS, are responding to the COVID-19 pandemic in Quebec long-term care facilities.

DND Press Release, Ottawa, 17 April 2020: Starting today, Canadian Armed Forces (CAF) liaison and reconnaissance elements will be dispatched to Quebec to gather information in support to the upcoming deployment of CAF medical personnel and resources to help ease the ongoing situation in long-term care facilities (LTCF). This is in response to the most recent request for assistance that CAF has received from Quebec.

This reconnaissance by CAF members will help establish the locations and the employment protocols for our approximately 125 CAF members with health care training that will begin to deploy on Saturday, April 18th in Quebec, to assist in LTCF in the Province. These teams, known as Augmented Civilian Care (ACC) Teams, will be comprised of nursing officers, medical technicians and support personnel. They will assist local doctors and nurses by providing civilian patient management, including the medical care of those in LTCF, assist in the coordination of nursing and logistical requirements as well as with the delivery of federally or provincially-sourced essential protective equipment to those working in LTCFs.

In partnership with other government departments and agencies, the CAF is always ready to respond to emergencies in times of need, as requested by the Government of Canada (GC). The Defence Team is working closely with our federal, provincial, municipal and indigenous community partners as part of Operation LASER, the Canadian Armed Force operation supporting the whole of government response to COVID-19. Since Operation LASER was initiated just over a month ago, the CAF has quickly responded to two previous requests for assistance from the Government of Quebec.

The Department of National Defence (DND) and the CAF response in Quebec, to date, also includes approximately 80 Canadian Rangers that still remain deployed in Nunavik, Northern Quebec, and are working closely with the Nunavik Regional Board of Health and Social Services to prepare triage points to facilitate the work of healthcare personnel. Also underway, at the request of the Government of Quebec, is the deployment of approximately 80 Canadian Rangers in Basse-Côte-Nord in Eastern Quebec to assist vulnerable people and support local physical distancing awareness programs.

The DND and CAF continue to plan and prepare to support overall GC efforts in our fight against COVID-19. The Defence team is working closely with the Government Operations Centre, who has dedicated staff working to coordinate the federal response to the situation in Quebec. Canadians can be assured that all levels of government are working together to deliver the required help.

“We have worked closely with Public Safety Canada, Health Canada and the Government of Quebec to meet the urgent need for assistance in Quebec’s long-term care facilities. In these challenging times, the women and men who serve will do what they have always done, help Canadians in their time of need.” The Honourable Harjit S.Sajjan, Minister of National Defence.

“The Canadian Armed Forces will conduct a reconnaissance to define what tailor-made support can be provided to assist our fellow citizens in need. Our Augmented Civilian Care teams are flexible, adaptable, and scalable, and I am confident their efforts will go a long way to help improve conditions in the facilities we are deployed to.” General Jonathan Vance, Chief of the Defence Staff.