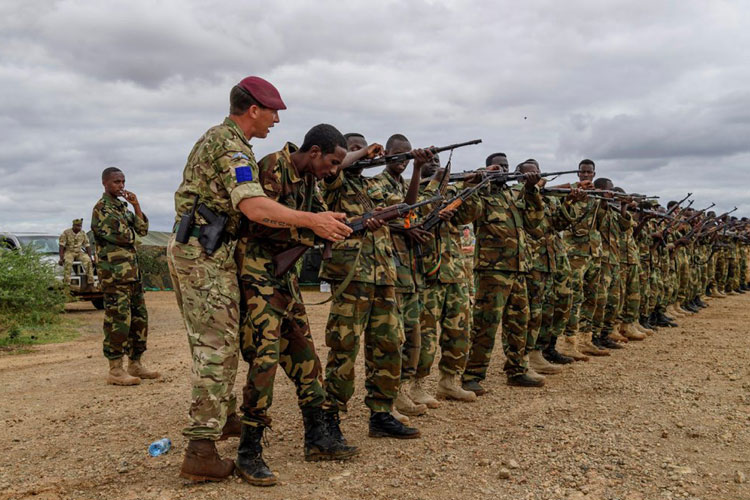 The British Embassy in Mogadishu has announced completion of training of the first battalion of the Somali National Army 8th Brigade in Baidoa in Somalia.

News Release, 20 March 2020: The first battalion of the Somali National Army (SNA) 8th Brigade has graduated from infantry training at the UK-supported training facility in Baidoa, the capital of Southwest State in Somalia. Over 400 SNA soldiers have been trained over 12 months forming the first battalion.

Through the training provided by British military personnel, the Somali National Army (SNA) troops learnt about gained skills in offensive and defensive operations, basic command and control, checkpoints, leadership, live firing, combat first aid, the law of armed conflict, human rights and gender, among other skills that will help them conduct effective security operations in the country.

The UK through the Conflict Stability and Security Fund (CSSF) is also supporting Somalia to strengthen its security institutions and governance through the provision of training facilities. At the graduation ceremony, the UK handed over a military barrack that will house up to 450 Somali troops and act as the military headquarters for the 8th Brigade in South West State.

The first company of SNA troops graduated in April last year and this year’s graduating troops mark the third company to have successfully completed training in South West State. The soldiers are expected to boost the national army numbers as they battle alongside African Union forces against Al Shabaab.

Speaking during the graduation of the first UK trained battalion, the British Ambassador to Somalia, Ben Fender said: “The UK is helping to develop the core of a strong professional army that can keep Baidoa and its surrounding areas safer. We have already seen our trainees achieve vital operational successes and we are delighted to be investing for the future through the new barracks.

“The UK is supporting Somalia to strengthen its security institutions and governance to deliver effective operations. One way to do this is through the provision of crucial infrastructure such as barracks. “The ambition was to complete a full Brigade of three Battalions (nine companies) within a year. We have also supported the construction of an excellent training facility as well as a barracks and a firing range that is now able to train a new company every eight to ten weeks.”

The Commander of British Forces in Somalia, Colonel Tony Casey said:“Today marks a special day as it is the culmination of a number of activities we have undertaken in support of Somalia’s security sector reform to help promote long-term stability and security for the benefit of all Somalis. We are excited that the new trainees will move to a new UK supported military barracks. The UK also handed over vehicles, uniforms and equipment to support SNA to operate in the most effective manner.”

The graduation ceremony was presided over by the British Ambassador to Somalia Ben Fender and attended by South West State president Abdiaziz Mohamed Laftagareen, Somalia’s Minister of Defence Hassan Ali Mohamed, State Minister Abdullahi Hamud and senior civilian and military officials from the Federal Government and Southwest State. During the event, the troops demonstrated their newly-acquired skills.

In August last year, the UK opened the Baidoa Security Training Centre (BSTC) including a firing range to support the Somali National Army and promote long-term stability and security in Somalia.