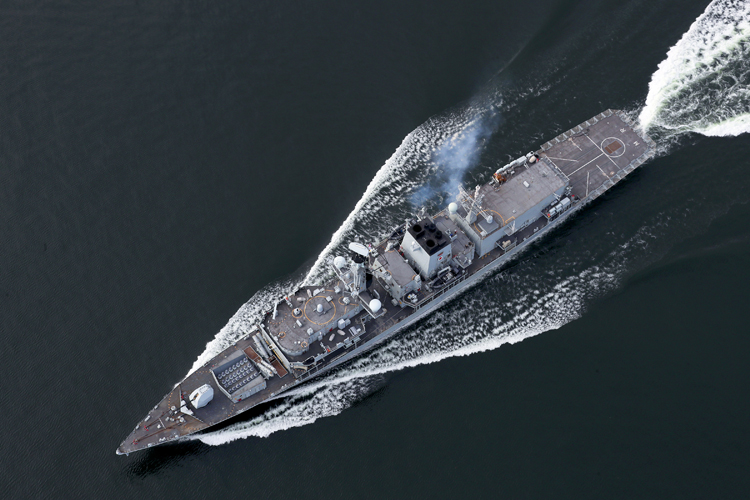 UK Foreign Secretary Jeremy Hunt has made a statement to Parliament following the seizure of the Stena Impero in the Strait of Hormuz last Friday.

UK Parliamentary Statement, 22 July 2019: Mr Speaker, with permission I will make a statement about the situation in the Gulf.

At approximately 4pm UK-time on Friday, Iranian forces intercepted the British-flagged tanker, Stena Impero, in the Strait of Hormuz. The ship was surrounded by four fast boats from the Revolutionary Guard supported by one helicopter. Iranian footage showed masked gunmen in desert camouflage descending from the helicopter on to the deck of the Stena Impero.

HMS Montrose, a Royal Navy Type 23 frigate currently deployed in the Gulf, tried to come to the tanker’s aid. She repeatedly warned the Iranians by radio that their actions were illegal, but Montrose was unable to reach the scene in time. Nine days earlier, she had successfully intercepted an attempt to board another tanker, British Heritage. But this time, Montrose was not given the notice of passage requested that would have allowed her to reach the scene more quickly. This, however, in no way excuses the illegal actions of the intruders, who took control of Stena Impero and compelled her to steer towards the Iranian port of Bandar Abbas, where she is now being held.

The tanker had a crew of 23 from various countries, including India, the Philippines, Russia and Latvia. No Britons were on board and there are no reports of any injuries. The vessel’s owners have confirmed that Stena Impero was exercising her legal right of transit passage when she was intercepted. She was passing through the Strait of Hormuz in the Westbound Traffic Lane – inside Omani territorial waters – in full compliance with international law and the rules of navigation. The tanker’s automatic identification system was switched on and her position was publicly available. So let us be absolutely clear: under international law Iran had no right to obstruct the ship’s passage, let alone board her.

It was therefore an act of state piracy which the House will have no hesitation in condemning. Even more worryingly, this incident was a flagrant breach of the principle of free navigation on which the global trading system and world economy ultimately depends. I therefore urge Iran to release the Stena Impero and her crew and observe the rules that safeguard commercial shipping and benefit Iran as much as any other country.

Iran has tried to present this as a tit-for-tat incident following the Government of Gibraltar’s action on 4th July to enforce EU sanctions by preventing the Iranian-chartered tanker, Grace 1, from supplying oil to Syria. But there is simply no comparison between Iran’s illegal seizure of a vessel inside a recognised shipping lane – where the Stena Impero had every right to be – and the enforcement of EU sanctions against a tanker that had freely navigated into the waters of a British Overseas Territory.

Since 4th July we have made strenuous efforts to resolve the Grace 1 issue. On 13th July, I spoke by phone to the Iranian Foreign Minister, Javad Zarif, and also made clear in public that we would be content with the release of Grace 1 if there were sufficient guarantees the oil would not go to any entities sanctioned by the EU. But instead of responding constructively, Iran chose to seize the Stena Impero, so we must now take appropriate action to support the safe passage of vessels through the Strait of Hormuz.

As well as speaking again to my Iranian counterpart, I have also spoken this weekend and today to the Foreign Ministers of Oman, the United States, France, Germany, Italy, Finland, Spain and Denmark. COBR meetings were held this morning and throughout the weekend and the Charge D’Affaires at the Iranian Embassy in London was summoned to the Foreign Office on Saturday to receive a formal protest. I can today update the House on further action we are taking.

Firstly, the Department of Transport has raised the security level for British-flagged shipping to Level 3, advising against all passage in Iranian waters and, for the moment, in the entire Strait of Hormuz.

Secondly, because freedom of navigation is a vital interest of every nation, we will now seek to put together a European-led maritime protection mission to support safe passage of both crew and cargo in this vital region. We have had constructive discussions with a number of countries in the last 48 hours and will discuss later this week the best way to complement this with recent US proposals in this area. The new force will be focused on free navigation, bearing in mind that one fifth of the world’s oil, a quarter of its liquefied natural gas – and trade worth half a trillion dollars – passes through the Strait of Hormuz every year. It will not be part of the US maximum pressure policy on Iran because we remain committed to preserving the Iran nuclear agreement.

Thirdly, while we will seek to establish this mission as quickly as possible, the Government has in the meantime dispatched HMS Duncan, a Type 45 destroyer, to take over from HMS Montrose – and she will arrive in the region by the 29 July, a week from today.

Fourthly, we will ask all British-flagged ships to give us notice of any intention to pass through the Strait of Hormuz to enable us to offer the best protection we can. We will then advise them as to the safest way to transit, which may involve travelling in convoy.

Finally, we are strengthening measures to protect ships flying the flags of other countries but which have British crew on board.

Mr Speaker, about 1,300 ships appear on the UK Ship Register. The combined British Red Ensign fleet is the 9th largest in the world and on an average day, two or three ships belonging to the Red Ensign Group pass through the Strait of Hormuz. The Gulf spans an area of nearly 100,000 square miles. HMS Montrose covers an operating area of some 19,000 nautical miles and so far, has escorted 30 merchant vessels through the Strait during 17 separate transits, travelling 4,800 nautical miles in the process. It is of course not possible for the Royal Navy to provide escorts for every single ship or indeed eliminate all risks of piracy. But those risks can be substantially reduced if commercial shipping companies cooperate fully with instructions from the Department of Transport, which we strongly encourage them to do.

These changes – both short and medium term – are made possible because of the commitment this Government has already made to increase our security presence in the Gulf, including the opening, in April last year, of the first permanent British naval facility in the Gulf for over 40 years. This establishment in Bahrain now hosts HMS Montrose along with four mine counter-measure vessels and one supply ship.

Finally let me say that it is with a heavy heart that we are announcing this increased international presence in the Gulf because the focus of our diplomacy has been on de-escalating tensions, in the hope that such changes would not be necessary. We do not seek confrontation with Iran; we have taken every available opportunity to reduce misunderstanding whilst standing by our rock-solid commitment to the international rule of law which is the foundation of global peace and prosperity. But we must also react to the world around us as it is – and not how we would wish it to be.

So if Iran continues on this dangerous path, they must accept the price will be a larger Western military presence in the waters along their coastline, not because we wish to increase tensions but simply because freedom of navigation is a principle which Britain and its allies will always defend.

And I commend this statement to the House.