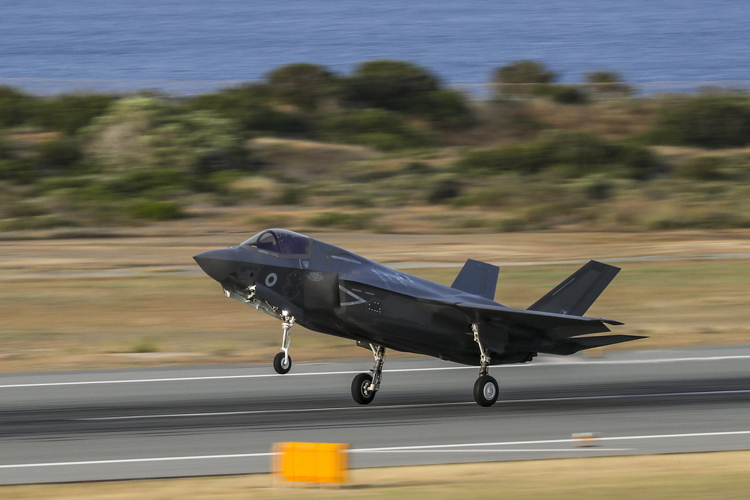 Operation SHADER ~ early this morning the UK news channels reported that RAF F-35B aircraft have been conducting missions over Syria.

It has been reported overnight by both Sky News and the BBC that RAF F-35B Lightning II aircraft have been conducting operational missions against Da’esh from Cyprus. On 21st May, six F-35s deployed to RAF Akrotiri on Cyprus on Exercise LIGHTNING DAWN. In an official statement issued following their departure from Norfolk it was stated: “The aim of Ex LIGHTNING DAWN is to fly the F-35B away from its homebase of RAF Marham, while also examining the logistical aspects of such a deployment.”

As we have not yet, as of 07:15, seen any official RAF / MoD statement in confirmation of this we have asked MoD Main Building for confirmation and will post it below as soon as possible after we receive it.

F-35s have flown alongside Typhoon aircraft on operational flights over the skies of Syria and Iraq, as part of the ongoing fight against Daesh, the Defence Secretary has confirmed. It follows a successful training period in Cyprus, known as Exercise LIGHTNING DAWN, aimed at building capability for the aircraft and supporting elements. Due to the exceptional performance of the aircraft, pilots, and support staff during this time, it was decided that they were ready to make their operational debut from RAF Akrotiri, alongside the Typhoons.

Speaking at RAF Akrotiri, Defence Secretary Penny Mordaunt said: “The F-35s are the most advanced jets our country has ever possessed and will form the backbone of British air defence for decades to come.

“They have passed every test their training has thrown at them with flying colours and their first real operational mission is a significant step into the future for the UK.”

The first RAF F-35B operational sorties were flown on Sunday 16 June in support of Operation SHADER, the UK contribution to the Global Coalition’s counter Daesh mission in Iraq and Syria. The two aircraft conducted a patrol over Syria, and UK F-35s have flown a further 12 sorties since then.

The F-35 is the first aircraft to combine radar-evading stealth technology with supersonic speeds and the ability to conduct short take-offs and vertical landings. The Lightning force is jointly operated by the RAF and Royal Navy. With the ability to operate from land and sea, the F-35 forms a vital part of delivering a ‘carrier strike’ capability to the UK when combined with Britain’s new Queen Elizabeth Class aircraft carriers.

Chief of the Air Staff, Air Chief Marshal Sir Stephen Hillier, said: “This first operational mission for the UK’s F-35 Lightning confirms the impressive progress which we have made in introducing this formidable new capability into service.

“It is testament to the outstanding abilities of our dedicated and highly trained air and ground crew that 617 Squadron has achieved this important milestone so quickly and so effectively.”

“This Autumn, our aircraft carrier HMS Queen Elizabeth will return to the East Coast of the United States to conduct Operational Trials with our Lightning Force, taking this 5th generation capability to the next level as they prove their ability to operate from the sea.

“For decades to come, this exciting new combination of aircraft carriers and F35B Lightnings will provide a potent, globally deployable carrier strike capability, a powerful conventional deterrent and the centrepiece of our country’s expeditionary forces.”

Later in the year, 617 Squadron will embark in HMS Queen Elizabeth for the first time. The UK jets will conduct Operational Tests, alongside 17 Test and Evaluation Squadron, onboard the carrier in the USA during the WESTLANT 19 deployment, proving their capability at sea. This is vital step on the path to the first Carrier Strike Deployment planned for 2021.

The UK currently owns 17 F-35B aircraft with the reformed 617 Sqn arriving back in the UK last year. More jets are due in Britain over the coming years, including the imminent arrival of 207 Sqn at RAF Marham, and there is an overall plan to procure 138 aircraft over the life of the programme. The programme has already generated $12.9 billion worth of orders and at peak production will support thousands of British manufacturing and engineering jobs.

UK Air Component Commander for the Middle East, Air Commodore Justin Reuter, said: “Having exceeded all training objectives during the deployment to Cyprus we have committed the UK’s Fifth Generation fighter, the F-35B, to the counter-Daesh fight on Op SHADER.

“The aircraft is available for a short period before returning to the Carrier Strike programme and it offers me, the UK Air Component Commander, cutting edge multi-role capability in the continued operation to support our partners to destroy Daesh in Iraq and Syria.”

The Defence Secretary also used the visit to hold a meeting with her Cypriot counterpart, Savvas Angelides, to further bolster bilateral ties.