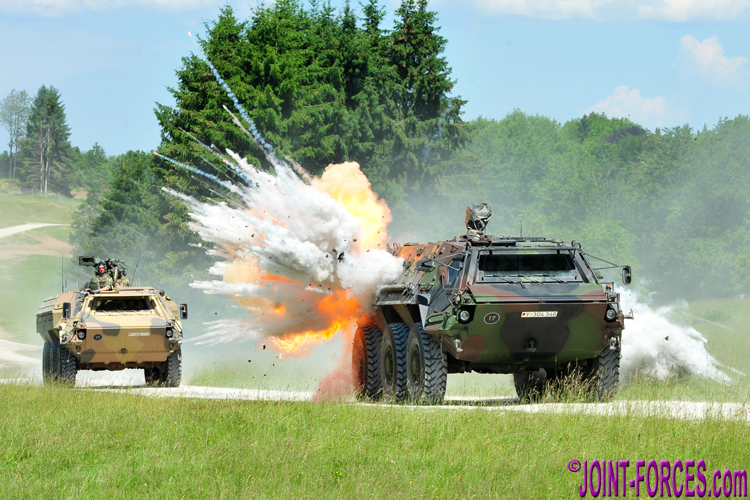 Tactical Combat Casualty Care (TCCC) training enables military and law enforcement forces personnel to provide extremely important efficient initial casualty care to wounded on the battlefield in order to prevent them from becoming fatalities before they reach a hospital or surgeon. TCCC measures are performed at the point of injury and in its close proximity, divided into Care Under Fire, Tactical Field Care and Tactical Evacuation Care elements. Conducted biennially by the V. Inspektion of Ausbildungs-zentrum Spezielle Operationen (Special Operations Training Centre) of the Bundeswehr, the TCCC Symposium is intended to disseminate knowledge on innovations and recent developments and deepen specific knowledge and skills.

Taking place between the 17th and 19th of June 2019 at Pfullendorf in Germany, and already conducted for the eighth time, the TCCC Symposium consisted of a series of lectures and presentations, a number of workshops and seminars and two Tactical Workshops called Exercise SHADOW BADGER and Exercise DIRTY BADGER. Led by Oberfeldarzt Günther and Oberfeldarzt Kremers of the V. Inspektion and Oberstleutnant Laurer, second-in-command of the Ausbildungs-zentrum Spezielle Operationen, the symposium saw the participation of 109 attendees from German and international military and law enforcement Special Forces and Special Operations Forces units. Patron of this year’s TCCC Symposium was Colonel Michael Cohen, Medical Advisor/Command Surgeon of the NATO Special Operations Headquarters.

The lectures and presentations part of the symposium covered a wide and diverse area of subjects, such as: medical intelligence for mission planning; an update on blood and blood transportation; emotional compromising in combat; and consequences for training and TCCC within a Chemical, Biological, Radiological and Nuclear (CBRN) environment. The audience was also introduced to the new Forward Light Element for Decontamination and Disinfection (FLED) concept under development by the Bundeswehr, received briefings on the NATO Special Operations Combat Medic (NSOCM) course and was introduced to the Ranger Medic Training of the Swedish Armed Forces.

Then things got more practical. During various workshops and seminars the attendees were: introduced to Sonography Training for Special Operations Forces; learned to cut out a casualty from his CBRN protective clothing in order to allow treatment; were shown how to deal with dental, jaw and face emergencies; and were provided with an introduction to Regional Anaesthesia for Special Operations Forces. Other workshops and seminars covered the process of determining the priority of patients’ treatments based on the severity of their condition, known as Triage, introduced the attendees to the art of Rescue and Recovery from Low Altitudes and gave them the ability to train applying tactical care in the confined space of a vehicle moving at speed over rough tracks. In order to improve TCCC training and make it more realistic the workshops and seminars part of the symposium also covered: the use of pyrotechnics in training; realistic accident simulation in training, including the employment of amputees; and the use of manikins in training, such as the Multiple Amputation Trauma Trainer (MATT), the Clinical Response Upper (CRU) and Clinical Response Lower (CRL) offered by TraumaFX.

The last day of the symposium saw the attendees participating in two small exercises, SHADOW BADGER and DIRTY BADGER, each lasting about an hour.

Under the scenario of Exercise SHADOW BADGER the attendees formed part of a patrol that was attacked with small arms fire and rocket propelled grenades, with one of the latter hitting one of the Transportpanzer 1 Fuchs wheeled armoured personnel carriers of the patrol and resulting in eight badly injured casualties. In cooperation with other attendees who served as Quick Reaction Forces and were flown in by a NH-90 utility helicopter, the casualties now had to be recovered from the vehicle, receive care under fire, then be moved to a nearby compound where tactical field care could be performed, and finally be prepared for evacuation by helicopter.

The scenario of Exercise DIRTY BADGER saw the attendees performing a raid on a building, wearing CBRN equipment, as a chemical weapons threat was envisaged. They then had to deal with several casualties caused by an explosion. Some of the casualties were contaminated by unknown chemical agents. Again Care Under Fire, Tactical Field Care and Tactical Evacuation Care had to be performed.

During both exercises the attendees were given the chance to put to use the training received during the workshops and seminars.

The TCCC Symposium 2019 was a huge success and every attendee J-F spoke to, whether a member of the Military or Police Special Forces, agreed that it was highly valuable training that will help them during future service when TCCC has to be performed. Currently the V. Inspektion of Ausbildungs-zentrum Spezielle Operationen plans to run the next TCCC Symposium in 2021.