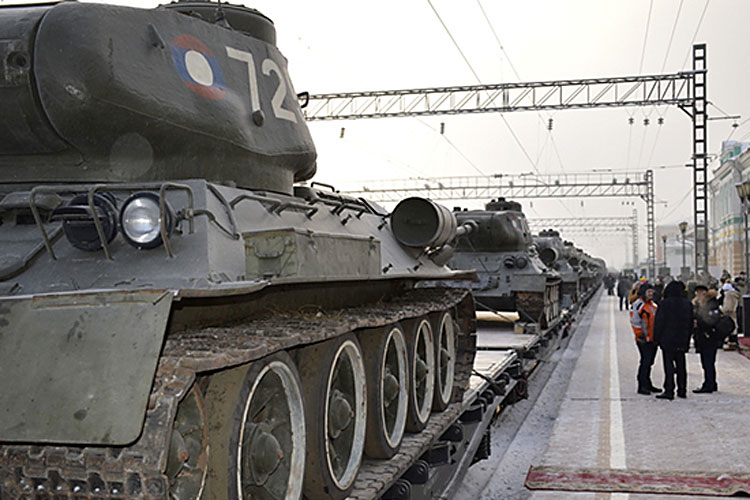 A train with T-34 tanks transferred by the Lao People’s Democratic Republic to the Russian Federation continues travelling along the Trans-Siberian railway.

Press Release, 14 January 2019: The T-34 tanks were welcomed by hundreds of citizens, including veterans of Great Patriotic War, military and Yunarmiya members. The meeting was attended by representatives of the command of the Strategic Missile Forces and personnel of the 29th Missile Division. Everyone was given the opportunity to look at the combat vehicles.

The T-34 tanks have a special place in hearts of Irkutsk residents. At the beginning of World War II, young Irkutsk Komsomol members initiated a movement to raise funds for the production of these combat vehicles. Thanks to the donations of the citizens managed to build two tank columns, which were transferred to the front. In honor of this feat the Irkutsk Komsomolets tank-monument was erected in the centre of the city: the famous T-34, whose crew heroically participated in the liberation of Prague.

It is to be reminded that the Lao Ministry of Defence transferred thirty T-34 tanks in a fully operational state to the Russian military department as part of military-technical cooperation. Until recently, armored vehicles were in service with the army of the Lao People’s Democratic Republic. The vehicles are planned to be used in military parades in various cities of Russia, updating museum exhibits, as well as for filming historical films about the Great Patriotic War.