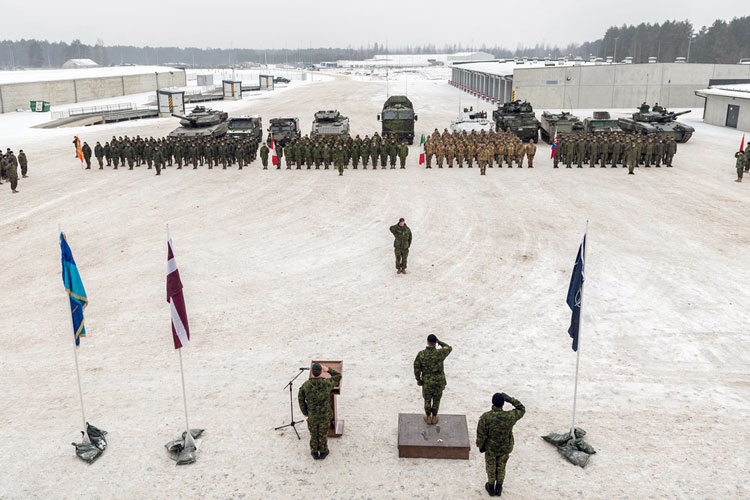 Lieutenant Colonel MacBeth, who assumed command in July 2018, led the eFP Battle Group throughout its third rotation. “I am extremely proud of the work that has been done over the past six months. We have improved our interoperability as a Battle Group and strengthened our partnership with the Latvian National Armed Forces through a rigorous training cycle,” said MacBeth.

In addition to all the exercises, the Albanian Explosive Ordinance Disposal Platoon uncovered over 1,000 pieces of unexploded ordinance throughout the course of the rotation. Additionally, Battle Group engineers from Spain conducted 150 Military Load Classification bridge inspections throughout Latvia, sharing the data with Latvia’s Ministry of Transportation. The Battle Group also grew by one nation in December with the addition of Montenegro which contributes a section of reconnaissance soldiers.

“As the new Commanding Officer, I look forward to leading this professional Battle Group over the next six months,” said Lieutenant Colonel Sauvé. “We are prepared for success thanks to the hard work done by the past rotations and we look to build on those successes as we forge ahead.”

The eFP Battle Group in Latvia is made up of military personnel from Albania, Canada, Czech Republic, Italy, Montenegro, Poland, Slovakia, Slovenia, and Spain. The Battle Group is integrated with the Latvian Mechanised Brigade Group and works hand-in-hand to deter, and if necessary, defend the people of Latvia from any potential aggression.