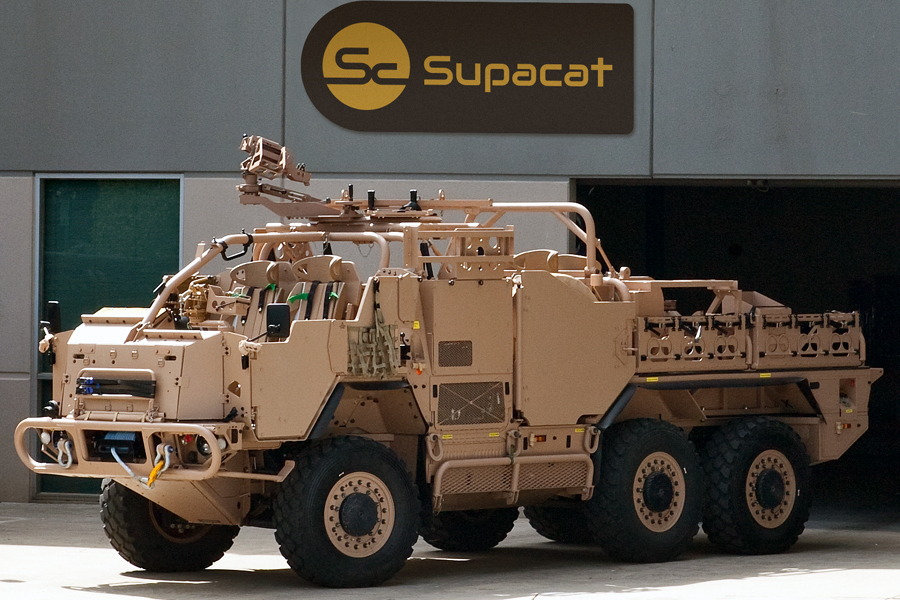 Watch a neat time-lapse video which shows how the Supacat EXTENDA solution can turn a 4×4 HMT JACKAL into a 6×6 HMT COYOTE.

The Supacat HMT EXTENDA model, used by the Special Operations Forces of four of the seven nations on three continents which currently use versions of the Supacat HMT or High Mobility Transporter family, effectively turns an HMT 4×4 (JACKAL in British Army service) into an HMT 6×6 (COYOTE in British Army service) in just a couple of hours using standard first-line military workshop tools and a suitable crane or overhead winch. At one of a series of online (to get around COVID-19 travel restrictions) briefings given to invited specialist media on Thursday, the Devon-based designer and manufacturer ran the following video sequence to illustrate just how easy the EXTENDA conversion is.

So why not just buy a specific quantity of straight 4×4 and 6×6 vehicles, you might ask. Seemples! By procuring the HMT EXTENDA 4×4 / 6×6 version, the user can quite easily run different combinations of open-topped (for situational awareness) armed and armoured shorter double axle recce &/or patrol vehicles along with the required number of longer triple axle ‘mothership’ logistic vehicles to suit any specific operational requirement. Not all EXTENDA vehicles procured by a user will necessarily be triple axle versions, but any double axle vehicles from the batch would have the capability to be speedily extended with a third axle module plus a n accompanying upper hamper pulled from stocks (or recovered from a disabled or damaged 6×6) with comparatively little effort.

In the first decade of the 21st Century the British Army procured a mixed fleet of over six hundred non-EXTENDA HMT 4×4 (JACKAL) and HMT 6×6 (COYOTE and SOOTHSAYER) variants, designated M-WMIK, under Urgent Operational Requirement procedures for Iraq and Afghanistan and around 75% of these were earmarked for transfer to Core Fleet post-Op HERRICK. It is possible to relatively easily factory modify a UK MoD spec JACKAL to give it an EXTENDA capability.

Around 70 other HMT variants known as MENACITY (sometimes spelled MINACITY) were procured for specialist UK Forces users prior to the UOR purchases of JACKAL and COYOTE, but neither the manufacturer nor the MoD talks about these.

¤ We are currently preparing a mini-series on the Supacat HMT in UK service, but as this is still a good way down the list of features awaiting publication (why are there only 24 hours in the day and only seven days in the week?) we decided to air this EXTENDA video in the meantime. Our thanks to our friends at SC Group for releasing the footage to us.