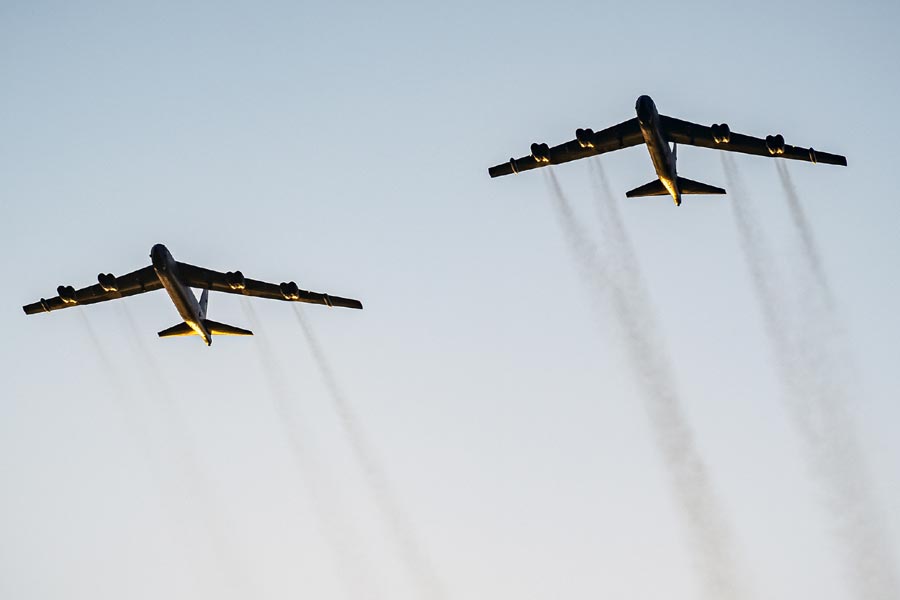 In a display of commitment to European security and solidarity US Air Force B-52 Stratofortresses overflew all 30 NATO Allies last Friday, 28 August.

In a display of commitment to European security and solidarity, six US Air Force B-52 Stratofortress bombers overflew all 30 NATO Allies on Friday, 28 August 2020.

Four B-52s deployed to the UK Royal Air Force’s base in Fairford overflew Europe, while two bombers flying from Minot Air Force Base in the United States overflew North America for this long-planned event, named ‘ALLIED SKY’. Along the way, the bombers were escorted by around 80 fighter aircraft from other Allied militaries. Aircraft from 20 other NATO Allies flew alongside the US bombers: Belgium, Bulgaria, Canada, Croatia, the Czech Republic, Denmark, France, Germany, Greece, Hungary, Italy, the Netherlands, Norway, Poland, Portugal, Romania, Slovakia, Spain, Turkey and the United Kingdom. The training boosted Allies’ ability to respond together to any challenge, helping deter any potential aggression, prevent conflict and preserve peace.

The United States has been flying Bomber Task Force missions in Europe since 2018, racking up over 200 sorties to date. This NATO Multimedia footage – supplied by the US Department of Defense, Belgian Ministry of Defence and Turkish Ministry of National Defence – released this evening, includes shots of B-52 bombers on the ground, in flight, and being escorted by fighters from various Allies:-

ALLIED SKY, B-52, B-52 Stratofortress, Featured, NATO, US Air Force
You may also like