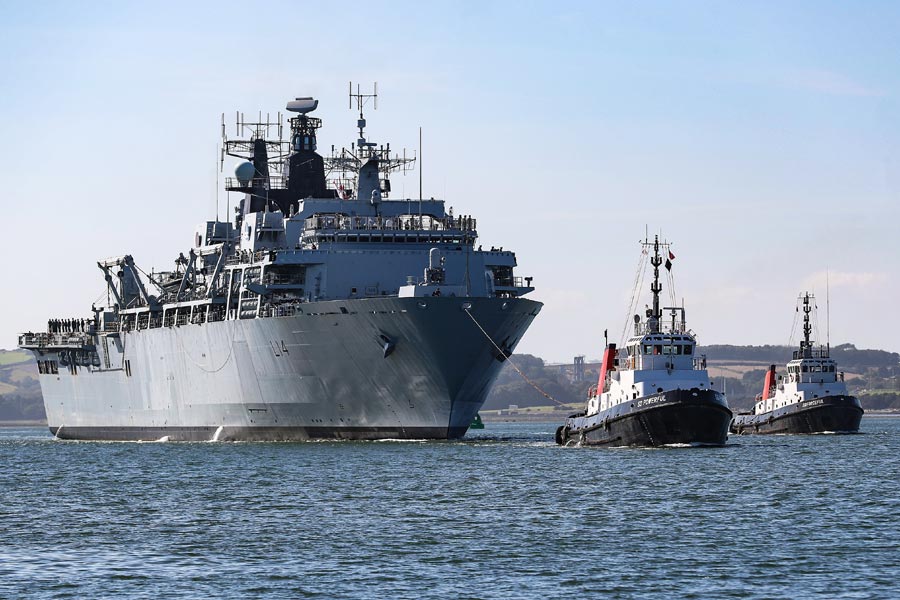 RN News Release, 14 September 2020: More than 1,000 sailors and Royal Marines have sailed on a three-month mission to the Mediterranean to forge the commando forces of tomorrow. UK flagship HMS Albion has left the UK, heading a force which will visit numerous partner nations across the Mediterranean and Black Sea as the UK’s Armed Forces nurtures new friendships and cements traditional alliances.

As underlined by the Secretary of State for Defence Ben Wallace, speaking aboard the UK’s newest ship HMS Tamar today, the Royal Navy will be innovative, versatile and ready for persistent global campaigning as it enters the 2020s. This deployment will see those attributes sharpened as commandos test and develop tactics using innovative new kit and build experience working alongside NATO Allies and regional partners.

While deployed the ships will test the new concepts of the Littoral Strike Group (which replaces the UK’s long-standing Amphibious Task Group) and shape the Future Commando Force (FCF) – the evolution of the Royal Marines into a hi-tech raiding and strike force – both of which are at the heart of the transformation of the Royal Navy. Named the Littoral Response Group (Experimentation) deployment, the force includes the headquarters and staff of Commodore Rob Pedre, the Commander Littoral Strike Group, flagship HMS Albion, destroyer HMS Dragon and amphibious support ship RFA Lyme Bay.

“We will test cutting-edge technology and innovative concepts such as the Future Commando Force and the Littoral Strike Force concept to ensure our war-fighting edge in an era of constant competition.”

In addition to the ships, the Future Commando Force will be represented by elements from the specialist raiding units of 47 Commando, Marines of 42 and 40 Commando based in Plymouth and Taunton, and the intelligence experts of 30 Commando Information Exploitation Group (Plymouth), and Wildcat helicopters from the Commando Helicopter Force at RNAS Yeovilton.

A series of workouts through the autumn will build on cold weather trials and training conducted by the Royal Marines in Norway earlier this year. The task group will also support NATO’s Mediterranean security operation SEA GUARDIAN and conduct exercises in Cyprus – OLYMPUS WARRIOR and AUTONOMOUS ADVANCE FORCE 3, a test of cutting-edge kit and how it can be exploited by commandos to deal with the very latest of threats. And activity in the Black Sea will include a series of training exercises and port visits to demonstrate the UK’s support for regional security and freedom of movement in Black Sea waters.