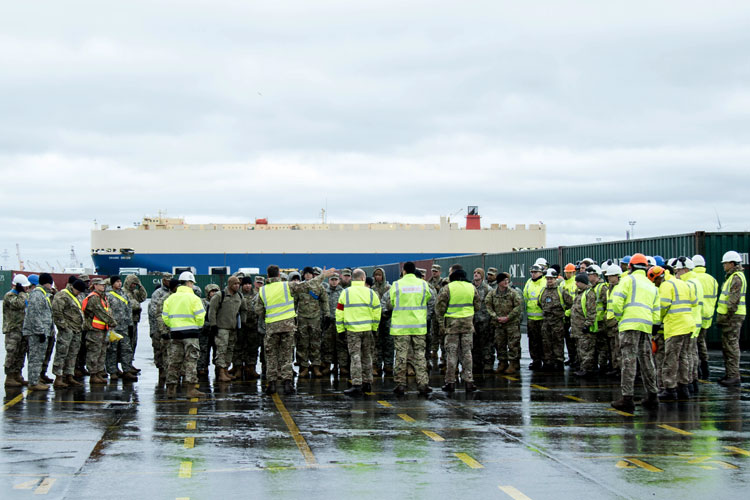 With ARC Integrity as a backdrop a British Army Major introduces the 'Wagonmasters' of 1st Cavalry Division Sustainment Brigade to the port operation at Antwerp, 23 February 2020. [US Army Photo: Sgt. Calab Franklin]

At the start of this week a third military sealift ship, ARC Integrity, carrying US Army materiel for DEF20 berthed in one of the North Sea Ports.

In addition to dockside footage this fascinating 10-minute US Army video, shot on Tuesday 25th, has some great sequences taken inside ARC Integrity showing not only the sheer size of the transport ship but the skills and cooperation needed to safely and speedily unload Heavy Equipment Transporters and military trucks. Several British Army specialists, believed to be from 52 (Port) Squadron of 17 Port & Maritime Regiment RLC, can be seen working with US troops and Belgian stevedores at various times; if unsure how to distinguish UK troops from their US cousins, the brown rather than coyote tan boots are one of the clues. Also on this video the Battalion Sergeant Major of 838th Transportation Battalion, part of the US 1 CAV 598th Transportation Brigade, explains what his unit is doing in Antwerp.

In the lead photo a British Army Major from 52 (Port) Squadron RLC, with ARC Integrity as a backdrop, introduces the ‘Wagonmasters’ of US 1st Cavalry Division Sustainment Brigade to the British Army and Belgian port operation established in the Temporary Military Village on the dockside at Antwerp Euro Terminal.

Footnote: This morning, for the fourth time since the start of this month and prior to penning this short piece mentioning British troops deployed on DEF20, we asked via email the DDC (Directorate of Defence Communications) point of contact at MoD Whitehall a number of pertinent and non-controversial questions about current British Army involvement on the exercise. Normally when we telephone the publicised Media Enquiries number at MoD Main Building with a specific query we are asked to put our question/s in an email, which we do as we fully appreciate that the press officer answering the phone cannot possibly know all the answers to every question from the media. If would be great to be able to just directly contact the relevant British Army Unit Press Officer or Adjutant, or their RAF or RN equivalents, to quickly check the facts but unfortunately these days that is sadly not permitted.

¤ More than four hours after politely asking our questions yet again, we have heard nothing – does not communicating count as Communications these days?