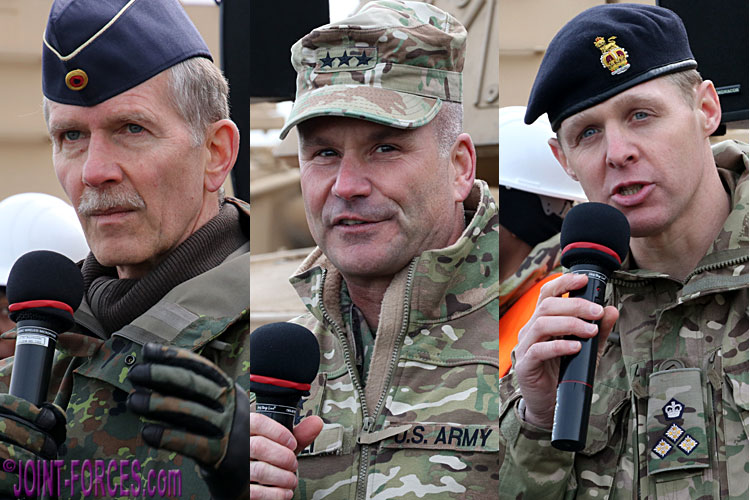 On Friday 21st February members of the press, including JOINT-FORCES.com, had the opportunity to participate in a media event at Bremerhaven Port, Germany.

Track and wheeled vehicles and other equipment from 2nd Brigade Combat Team, 3rd Infantry Division arrived in Bremerhaven [on Thursday 20th] as the first 1,200 pieces of US Army equipment to arrive from the continental United States designated for use in DEFENDER-Europe 20.

Members of the media were able to observe the offloading and movement of equipment, and participate in a question-and-answer period with US, UK, and German military leaders. Lieutenant General Christopher Cavoli, Commanding General of US Army Europe, Lt. Gen. Martin Schelleis, Chief of the German Joint Support and Enabling Service, Darion Akins, [US] Department of State Consul General (Hamburg), and Brigadier Joseph Chestnutt, Commander of the 104th Logistic Support Brigade (British Army) were on hand to answer questions on a wide range of subjects related to an exercise that demonstrates the US military’s ability to rapidly deploy a large combat-credible force from the US to Europe to support NATO and respond to a crisis. This US Army Europe video, by Robert Sekula, documents the Generals and the Consul General plus the media questions.

If all goes to plan, within the next 24 hours we hope to upload a photo album of some of the port operations at Bremerhaven, including US armour coming ashore from the Ro-Ro vessel ARC Endurance.

Editor’s Comment: As we on JOINT-FORCES.com are attempting to provide wide coverage of DEFENDER-Europe 20, or DEF20, the largest deployment of US Army personnel and equipment to Europe for more than a quarter century, I travelled out to Bremerhaven on Thursday to attend this event. Having already established through personal observation that units from 104 [UK] Logistic Brigade deployed earlier this month to Antwerp in Belgium and Mannheim in Germany, and as there have been no answers forthcoming from MoD Whitehall Press Office to several relevant questions asked over the last three weeks about UK Forces involvement on DEF 20, I was glad to have the opportunity to both hear Brig. Joe Chestnutt explain how personnel under his command have deployed from the North Sea Ports deep inside Germany and also have chance to ask him about any UK involvement in the Bremerhaven operation.