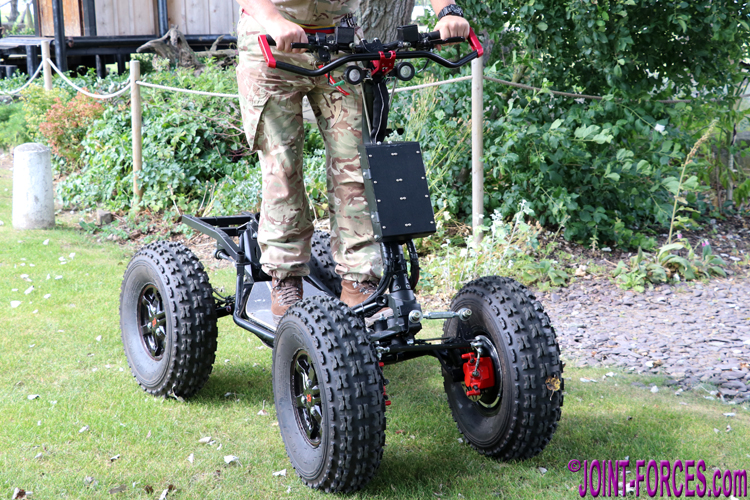 We spotted this intriguing little vehicle being displayed in the Elite Special Projects Zone at the recent 3CDSE exhibition in Great Malvern and to see how easy, or hard, it would be for an untrained soldier to master this lightweight all-terrain personal transport we asked if an NCO acquaintance could take it outside for a quick spin at the end of the show. The results can be seen in this quickly shot video clip.

Already attracting serious interest from certain NATO specialist units and airmobile formations, many of which have a requirement for a lightweight personal transport system to extend the range and reach of rapid intervention personnel on the ground who need to also carry substantial kit loads, the EZRaider HD4 is essentially an electric-powered scooter with a range of around 80km on a single charge and a top speed of 50km/hr. Measuring just 1700 x 740 x 750mm high when folded, and weighing only 130kg, the lightweight 4×4 scooter can transport two soldiers (one standing and the other sitting behind on a removable seat) or one soldier and 75kg of equipment. A powered electric trailer with its own battery can be speedily attached to allow an additional 250kg of cargo, or a stretcher rack plus casualty, to be transported and when coupled to the scooter this can double the operating range. Each wheel station on both scooter and trailer is powered by its own 1200W electric motor running off the onboard 60V battery.

Our NCO friend was given a quick, under 30 seconds, briefing on how to operate the EZRaider and then he was off to perform a quick circuit for the camera. Time constraints and the lack of an off-road track in the immediate vicinity (it would have been interesting to have taken the scooter a few miles down the road to Eastnor Castle) meant we could not see for ourselves how the EZRaider performs over rough terrain, but company videos we have watched are impressive. I reckon we should hear a lot more about this impressive little vehicle in military service in the not too distant future, and of course it has plenty of potential for the Security Sector too.