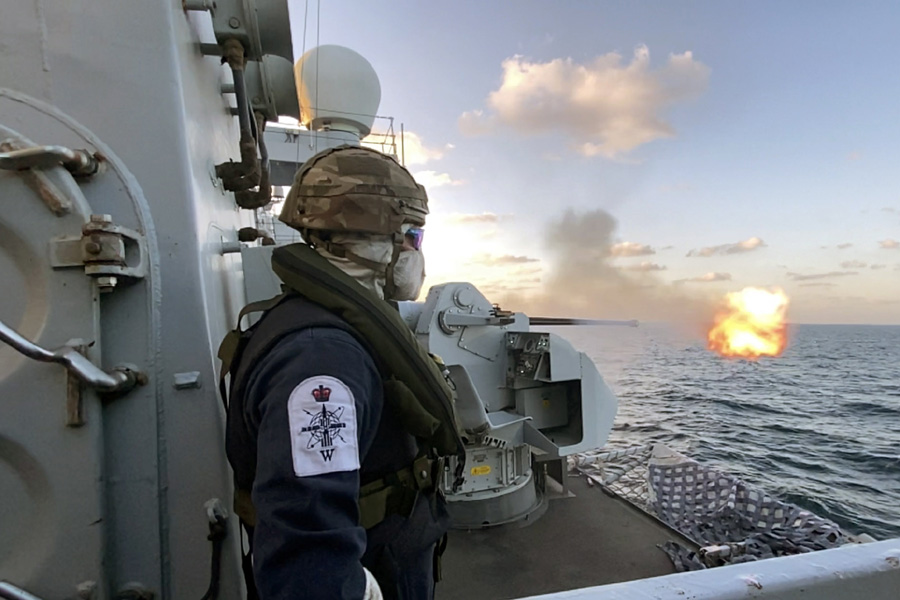 The frigate and her 200 sailors and Royal Marines have provided a constant presence by a major Royal Navy warship in the Middle East since April 11 2019, working with other British and allied vessels to safeguard shipping, keep sea lanes open and stop trafficking. Operating out of Bahrain – where the facilities and personnel of the UK Naval Support Facility, which opened in 2018, are key to sustaining basing Royal Navy ships in the Gulf – in her 1,000 days in theatre Montrose has:-

Upon arrival in the Middle East Bahrain, Montrose soon found herself at the heart of global events when tensions in the region led to threats and attacks on merchant shipping. Nearly three years on, the situation has eased substantially, but the frigate continues to work with several multi-national task groups to ensure shipping is safe and key sea lanes remain open.

“She has had many successes whilst in the region, including narcotics seizures and maintaining free and safe passage for shipping around three of the busiest trade chokepoints in the world. Montrose and her crews should be proud of what they have achieved.”

Montrose was in the vanguard of a programme to deploy major Royal Navy warships around the world for several years at a time. Patrol ships have since been committed to the Caribbean, Mediterranean and, most recently, Asia-Pacific region on extended missions. The initiative spares ships the long journey home to the UK every six or so months, with maintenance being carried out wherever the vessels are operating, and some – or, in the case of Montrose, all – crew changing every few months.

Commander Claire Thompson, Commanding Officer of Montrose’s Starboard Crew who are in charge of the ship until spring said: “I am immensely proud of what both crews have achieved during the past three years.

“Our enduring presence in this region has shown the commitment the UK has to ensure the stability and security of the Gulf region along with our allies.

“This couldn’t be achieved without the commitment of our personnel and their support from their families back home.”

In addition to keeping warships in their patrol areas for longer periods, the planned, regular rotation of sailors has allowed them to plan their lives back in the UK with much greater certainty when not deployed – which has been a huge draw for the ship’s two crews, Port and Starboard.

Montrose’s Weapon Engineer Officer Lieutenant Commander Ellis Pearson explained why they volunteered to serve in the ship: “It allows me and my family a high degree of certainty of when I’ll be away.

“Normally your programme is driven by the tasking of the Ship, which can change at very short notice, but with two crews we are de-latched from that when back in the UK.”

The two crews share the holiday periods, so that no sailor spends consecutive festive periods away from home. The current Starboard Crew took over the frigate just before Christmas – and will be home for Easter.

Petty Officer Darren Finch is on his fifth stint on Montrose, having been part of the Starboard Crew from the beginning. “Within reason I accurately know when and where I will be over 12 months in advance which I have not experienced in any other draft.

“This gives me the ability to plan key events in my life without the fear of potentially having to move or cancel them at short notice.”

Chief Petty Officer Harry Mowbray added: “It works for me! I’m going to transfer onto the next Forward Deployed Ship after HMS Montrose returns home later in 2022.”