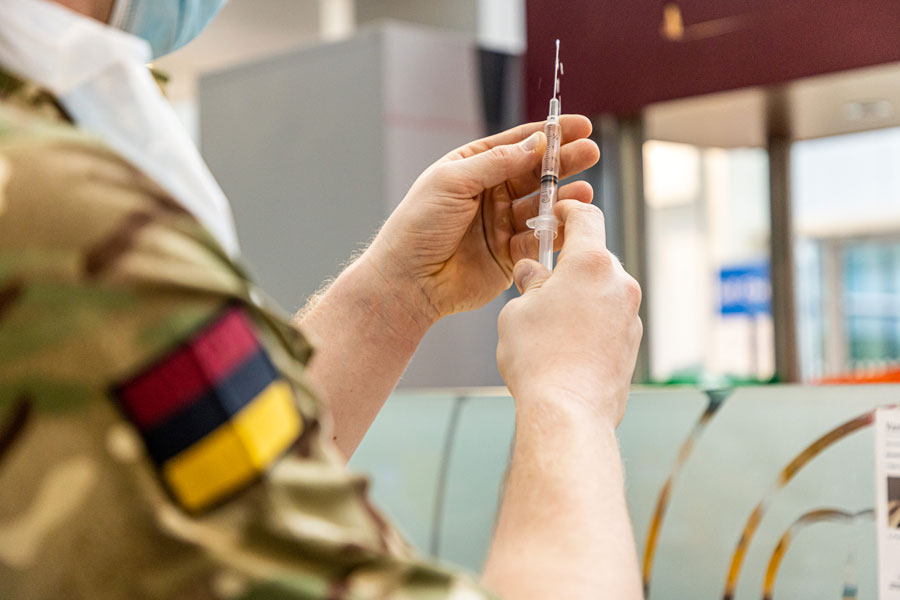 UK MoD Press Release, Whitehall, 06 January 2022: [embargoed 07 January] Two hundred Armed Forces personnel have been made available to support the NHS in London amid staff shortages due to COVID-19. The Ministry of Defence will provide 40 Defence medics and 160 general duty personnel to support NHS hospitals across the capital.

Service personnel began deploying this week and are expected to be on task for three weeks. Forty teams of five personnel, each comprised of one medic and four general duties personnel will be distributed flexibly to ensure support is targeted towards the areas where the need is greatest. Military medics will assist NHS staff with patient care. General duty personnel will support with tasks such as maintaining stocks, checking in patients on arrival and conducting basic checks.

Defence Secretary Ben Wallace said: “The men and women of our Armed Forces are once again stepping up to support their dedicated colleagues in the NHS, as they work hand-in-hand to protect the nation from COVID-19.

“They have shown their worth time and again throughout this pandemic, whether driving ambulances, administering vaccines or supporting patients in hospital and they should be proud of their contribution to this truly national effort.”

Defence are also providing 32 military co-responders to provide additional capacity to the South Central Ambulance Service (SCAS). Those deployed will work alongside SCAS paramedics and are expected to be on task until the end of March.

Health and Social Care Secretary Sajid Javid said: “Our brilliant armed forces have supported the country throughout the pandemic, bolstering the teams at testing sites, vaccination centres and hospitals.

“Once again they are stepping up to assist NHS workers who are working round the clock across the capital, helping the health service through this difficult winter period where the need is greatest.

“The most important thing you can do is get boosted now to protect your loved ones and communities from COVID-19.”

Regional Chief Nurse for the NHS in London Jane Clegg said: “We are thankful for the support of the Armed Forces alongside thousands of NHS staff, as they respond to the increased demands brought by COVID – ensuring continued high quality care and treatment for the many Londoners being looked after by the NHS this winter.”

More than 1,000 servicemen and women have also already been made available to support the vaccine booster programme, including 730 in England, 221 in Scotland and 98 in Wales. Since March 2020, the military has supported over 440 tasks as part of Operation RESCRIPT – the Ministry of Defence’s support to the UK’s response to the pandemic.

Personnel supporting on Operation RESCRIPT tasks have deployed from across the three services – Royal Navy, British Army and Royal Air Force – and are a mixture of regulars and reservists.