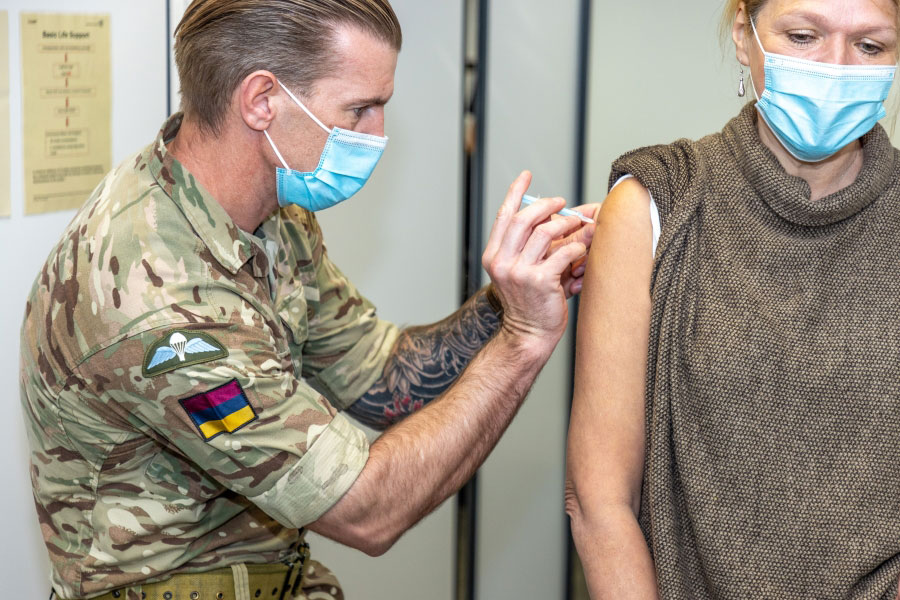 More than 750 troops will be administering COVID-19 vaccines and helping with planning to maximise the effectiveness of the booster roll-out.

News Release, Whitehall, 13 December 2021: 750 Armed Forces personnel have been made available to support the NHS, the Department of Health and Social Care and Scottish Government to accelerate the vaccine booster programme.

Over 100 personnel are currently supporting the vaccine roll-out in Scotland. 600 Armed Forces personnel have been made available to NHS England to administer vaccines, working in small teams across the country. In addition, around 50 personnel will provide planning support to NHS England. 41 planners will deploy to NHS trusts across England and 10 logistics experts will be based at NHS England’s headquarters in London.

“Our Armed Forces will help to get vaccines into arms as quickly as possible as we continue our efforts to support the UK’s response to the pandemic.”

Health and Social Care Secretary Sajid Javid said: “We are turbo-charging our COVID-19 booster programme to offer every adult in England a vaccine by the end of the year to protect people from the Omicron variant.

“Building our defences through boosters is a hugely important national mission and it’s brilliant to see the military supporting our NHS staff in our race against the virus.

“Please get boosted now to top-up your immunity and keep yourself and your loved ones safe this winter.”

Chief of the Defence Staff Admiral Sir Tony Radakin said: “ I’m proud of our Armed Forces who are once again stepping up to help protect people and communities.

“We have a long history of working hand in hand with the NHS as two organisations with a common goal – to help keep our people safe.”

Since March 2020, Defence has supported over 430 tasks as part of Operation RESCRIPT – Defence’s support to the UK’s response to the pandemic. Defence is currently supporting ambulance services in Wales and Scotland and the vaccine roll-out in Scotland among other tasks including testing. Support is being provided through the Military Aid to the Civil Authorities (MACA) process. Personnel supporting on Operation RESCRIPT tasks have deployed from across the three services – Royal Navy, British Army and Royal Air Force – and are a mixture of regulars and reservists.

News Release, Whitehall, 14 December 2021:An additional 100 Armed Forces personnel have been made available from today (14 December) to accelerate the vaccine roll-out in Scotland amid a wave of Omicron infections, bringing the total number of personnel supporting this effort to 221. Further support from the UK Government including Defence is on standby should it be requested or required.

121 personnel have been supporting the vaccine programme across Scotland since early October, and the boosted cohort of personnel are expected to be on task until the end of February 2022.

Alongside supporting the accelerated vaccine programme, 114 Armed Forces personnel are driving ambulances in support of the Scottish Ambulance service. As of today, this support will be extended until the end of March, with 96 personnel remaining on task to provide this life saving service.