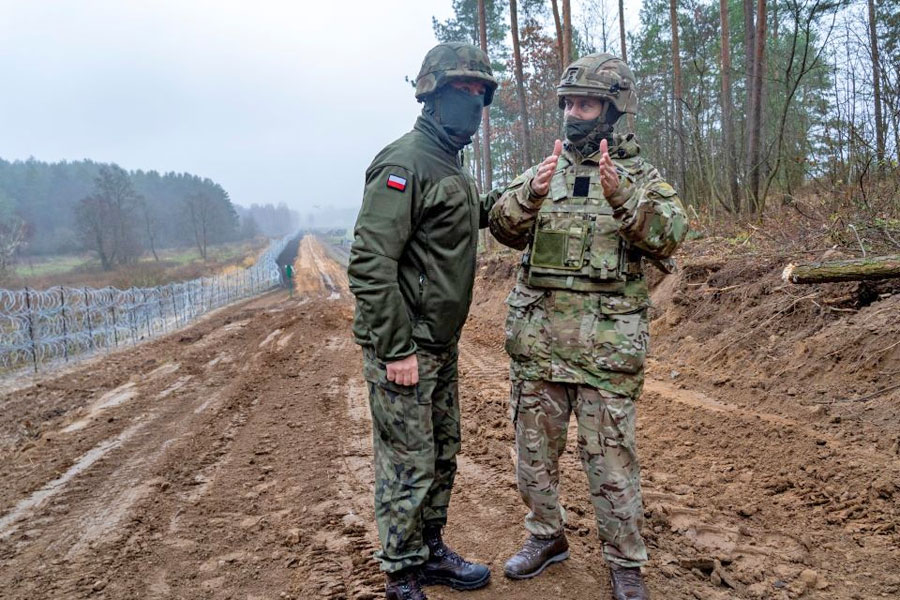 Polish and British personnel on reconnaissance at the Polish border, 14 November 2021 [Crown Copyright]

140 Royal Engineers are deploying to Poland to provide specialist support in response to the pressures from irregular migration at the Belarus border.

Press Release, Whitehall, 09 December 2021: Specialists from the 32 Engineer Regiment, the Royal Engineers, will provide bilateral support to Poland, a NATO ally and key European partner. Personnel will support Polish troops with specific engineering tasks along the border including infrastructure support and repairing access roads, as well as planning support. They will be on task from the end of December and the deployment is expected to last until April.

Defence Secretary Ben Wallace said: “Our commitment to European security is unwavering and we will always offer support to our allies.

This support follows the deployment of a reconnaissance unit on 11 November who worked with their Polish counterparts on ways the UK might be able to help. Additionally, a reconnaissance team have deployed to Lithuania to explore whether the UK can provide support to the nation who are facing similar pressures on their border. The small team will work alongside the Lithuanian military to establish if the UK can offer any expertise or capabilities to help counter current pressures.

Poland and Lithuania, along with their Baltic neighbour Latvia, have been under significant pressure from migration originating from Belarus and facilitated by the Lukashenko regime for a number of months.

The UK already has 150 personnel based in Poland under NATO’s enhanced Forward Presence as part of the US led battle-group in the country. Here, UK personnel train with NATO forces on a regular basis, from small training drills to full-scale battlegroup exercises.