Home > UK Operations > HMS Trent in the Gulf of Guinea 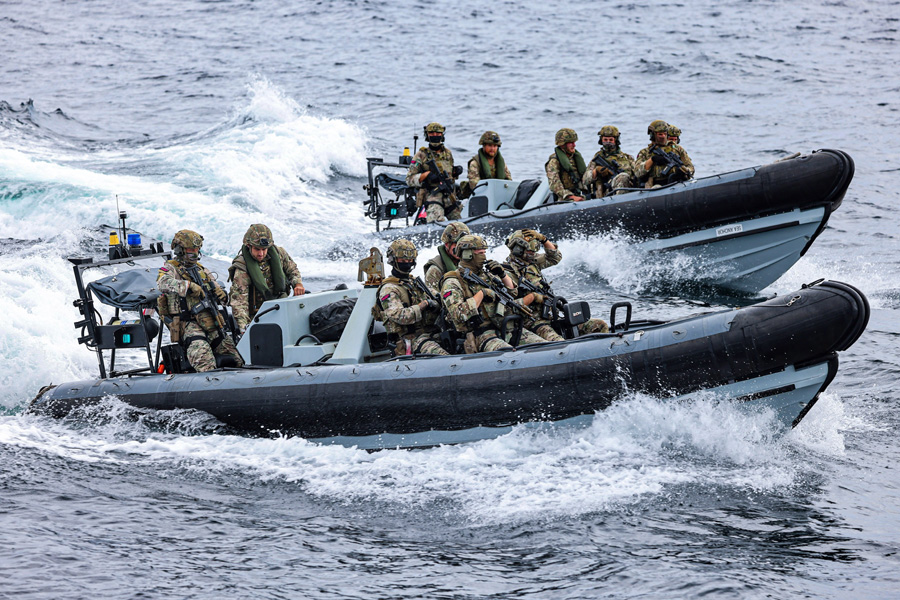 Royal Navy warship HMS Trent has joined the international fight against piracy in in the Gulf of Guinea to help protect UK trade.

Royal Navy News Release, 26 November 2021: A Royal Navy warship has joined the international fight against piracy in West African waters to help protect more than £6 billion of UK trade that passes through the region.

HMS Trent is in the Gulf of Guinea – one of the world’s piracy hotspots – as the UK looks to improve security and help prevent widespread piracy which has seen international shipping suffer, seafarers’ lives put in danger and damage caused to the economies of nearby nations. The patrol ship has visited Nigeria, Ghana and Senegal to foster ties and train local forces, equipping them in the fight against illegal activity, and spoken to local fishermen to understand patterns of life during security operations in the Niger Delta.

HMS Trent carries a specialist team of Royal Marines from 42 Commando who are experts in boarding operations, known officially as Maritime Interdiction Operations. The commandos have been sharing knowledge and expertise in the skills needed to board, search and – if needs be – seize suspect vessels. Trent’s mission also included French-led multinational exercises, known as GRAND AFRICAN NEMO, during which the ship worked closely with the Togolese, Nigerian and Benin Navies, while also operating with the Italian frigate Marceglia as part of international efforts.

The deployment of the patrol vessel is a clear signal of the UK’s commitment to the region. HMS Trent’s Commanding Officer, Commander Tom Knott, said: “I am extremely proud that HMS Trent is spearheading the Royal Navy’s return to West Africa and the Gulf of Guinea. My Sailors and Royal Marines are highly trained in the delivery of Maritime Interdiction Operations and are working alongside regional partners to re-establish our understanding of this complex and vast waterspace.

“Alongside the UK’s 2021 co-chairing of the G7++ Friends of Gulf of Guinea we are targeting a collaborative approach to improving maritime security and to reassure the merchant shipping community.

“This will be an enduring commitment to West Africa. So far we’ve already enjoyed hosting school children, conservation groups, government representatives and military leaders on board Trent to build stronger links with the community and explain exactly why the Royal Navy is deployed to this region.”

The UK co-chaired the G7++ Friends of the Gulf of Guinea conference with hosts Senegal during HMS Trent’s stop in Dakar this week. The meeting brings together nations to deal with illegal activities at sea in the region and Armed Forces Minister James Heappey visited Trent in the Senegalese capital. He said: “It was fantastic to be on board HMS Trent this week and to meet the servicemen and women who are working hard, far from home, to make the world a safer place.

“HMS Trent’s visit to Senegal and deployment to the wider region is a clear demonstration of how Global Britain is stepping up on the world stage, working hand-in-hand with our allies and partners to tackle shared challenges like maritime security.”

Ghanaian Navy officer, Lieutenant Christian Obeng Baah, spent time learning from the Royal Navy aboard HMS Trent alongside fellow Ghanaian officer Lieutenant Isaac Yaw Abban. Lt Obeng Baah said: “I feel the United Kingdom and Ghana has a rich history of comradeship and this is being deepened by our time on HMS Trent.

HMS Trent will soon visit Cape Verde where sailors and marines will train the Cape Verde Coast Guard in how to plan and conduct vessel boarding operations to support counter-narcotics missions. The ship will continue to The Gambia before continuing her long-term deployment to the Mediterranean that has seen her operate as far east as the Black Sea since she left the UK six months ago.