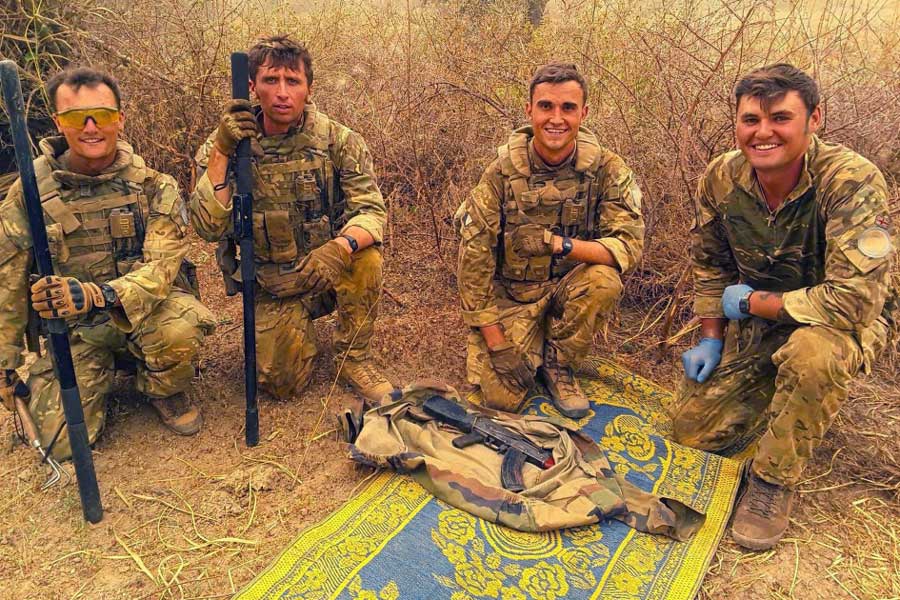 British peacekeepers pose with one of the AK47 rifles found [MoD: Crown Copyright]

UK troops deployed to Mali as part of the UN’s peacekeeping mission have seized a cache of weapons hidden by suspected Da’esh terrorists who had been threatening local communities. The operation, which was the first of its kind by UN forces in Mali, is a clear demonstration of how British peacekeepers have been making an impact in the UN’s mission to protect civilians during their first six months in the country.

The British force launched the Mission-approved ‘cordon and search’ operation in early May in a village close to the border with Niger, after receiving intelligence about violent extremists operating in the area. The extremists had been intimidating local communities, extorting money and assaulting people who refused to comply with their demands, meaning UK forces were able to respond to protect them under the UN’s peacekeeping mandate.

Minister for the Armed Forces James Heappey said: “This was the first operation of its kind by UN forces in Mali, demonstrating how UK personnel have made a significant contribution to the mission during their first six months in the country.

“Removing the weapons and disrupting the terrorist operation will make a real difference to the local community and importantly the intelligence collected will help develop our understanding and help to prevent the threat from armed groups in the future.”

The UK Task Group provides the UN with a highly specialised long-range reconnaissance capability, conducting patrols in remote areas, gathering intelligence and engaging with the local population to help the UN understand and respond to threats and fulfil its mandate to protect civilians.

Acting on information they had gathered, around 100 soldiers from the Light Dragoons and Royal Anglian Regiment, supported by a specialist Royal Engineer search team, were cleared by UN HQ to move into the village and search several buildings of interest. The operation took place during incredibly challenging conditions, including a sandstorm that reduced visibility to 30m, over 50C heat and soldiers carrying up to 45kg of equipment.

Upon searching the area, they found a hidden cache of terrorist material, including AK47 rifles and hundreds of rounds of ammunition, along with camouflage clothing, radios, mobile phones and hundreds of litres of fuel. The weapons and intelligence collected were then passed to the UN Mine Action Service, UN Police, and Malian authorities, who will use the information gathered and then destroy the materials.

A cell of suspected fighters from Da’esh-affiliated group Islamic State in the Greater Sahel (ISGS) fled by swimming across the River Niger before the peacekeepers arrived, leaving behind what they would consider valuable resources.

Lieutenant Colonel Tom Robinson, Commanding Officer of the Light Dragoons, said: “This operation is a tangible example of how UK soldiers, as part of the UN Force, are making a real difference to protect the people of Mali who are living in one of the most vulnerable regions in the world.

“Using intelligence gathered during our patrols, we focussed on where terrorist groups were intimidating local people and were then able to find and seize the weapons and supplies, disrupting their harmful influence on local communities and gathering more information that will help interrupt further extremist activity.”

The operation is the first targeted ‘cordon and search’ operation, acting on intelligence proactively gathered, to be carried out by UN forces in Mali. It demonstrates how the UN mission to Mali (MINUSMA) is working to protect civilians, support Malian authorities to maintain security and protect UN personnel from threats posed by terrorists.

Swedish Colonel Markus Hook, Commanding Officer of the UN Mission’s Mobile Task Force, of which the UK troops are a part, said: “This Cordon and Search Operation was the first of its kind in a long period of time for MINUSMA.

“It was based on information which suggested that a specific location within a village was being used for weapon storage by non-compliant armed groups which were harassing the local population.

“The operation was a direct and timely response to intelligence, and it serves as a telling example of how we are proactively fulfilling our mandate to protect civilians.”

The 300-strong UK Task Group deployed to Mali in December 2020 to support the UN mission, which is made up of over 13,000 peacekeepers from 56 different countries and works to support peace efforts, encourage security sector reform, protect civilians and promote human rights. The Sahel is one of Africa’s poorest and most fragile regions. It is marked by chronic poverty, instability, high levels of gender inequality, and is highly vulnerable to the effects of climate change. Terrorist violence and conflict have been sharply on the rise in recent years.

The UK is one of the largest humanitarian donors to the Sahel. In 2020 the UK gave £14.65 million in humanitarian aid to Mali and is currently in the process of increasing the size of the UK embassy to reinforce our diplomatic strength in the country.